Normand Lacroix wants to say his company Industries LacWood is very busy, but he doesn’t want too many people to know it.
Sep 28, 2011 5:57 PM By: Patrick Demers 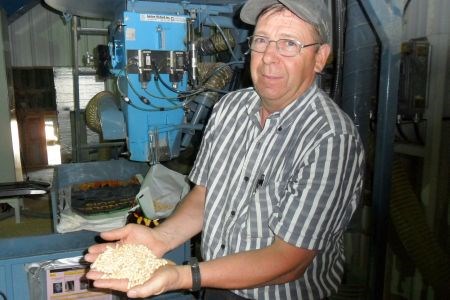 Normand Lacroix, president of Industries LacWood, displays his wood pellets, made out of the shavings from bigger manufactured items.

Normand Lacroix wants to say his company Industries LacWood is very busy, but he doesn’t want too many people to know it.

The Hearst forest products company counts international furniture maker, IKEA, as a major client as well as big-box stores such as Canadian Tire.

“I don’t even know how many products we can do here, but there’s probably around 40,” said Lacroix, president of Industries LacWood. “I’d have to sit down and count them, but there’s a lot.”

Industries LacWood is now transforming around 12-15 million board feet of lumber a year.

As a result, another line will be installed within the month to speed up the process.

The company also recently added a new customer to its supply list when it was asked to build thousands of picture frames.

A supplier from IKEA recently contacted Lacroix and asked if he could build a piece of wood for a specific type of bed it is making.

“The wood comes from Sweden and IKEA told them to call us,” he said. “So yes, we’re going to do it.”

The piece of wood is two-by-three with 18 holes drilled in it, taking four machines to successfully complete.

“It's more and more new customers added to the list,” said Lacroix. “We have a lot on our plates.”

But he said the key to success isn’t necessarily with its main products.

“The goal is to have no waste,” Lacroix said. “You know today we have the big factory, but we’re making money with the small things around it.”

With everyone one of its products, the raw material has to be dried at the proper furniture moisture level of 10 per cent or less.

Lacroix noticed that all the shavings created from building the IKEA-built products still had that exact percentage.

Industries LacWood is only one of two wood pellet operators in all of Ontario.

“But the other is all commercial,” explained Lacroix. “For a residential wood pellet producer, I’m the only one for sure.”

“All this waste, we use it and transform it to added-value products,” he said. “That’s how you make money.”

In fact, the waste from the raw materials from LacWood has created an additional 50 jobs, said Lacroix.

“Just commodities won’t get us anywhere,” he said. “We have big sawmill companies that only produce one-third of their capacity.

“So the wood isn’t being used at its full potential.”

For the future of his company, Lacroix said that he wants to take a couple of years to stabilize everything.

“When there’s too many changes, it’s hard,” he said. “We have to better organize. It’s a big learning curve.”

But when asked what his company is going to look like five years from now, he laughed and said he could imagine it, but he won’t say it.