Expansion in the works for Atikokan wood pellet mill 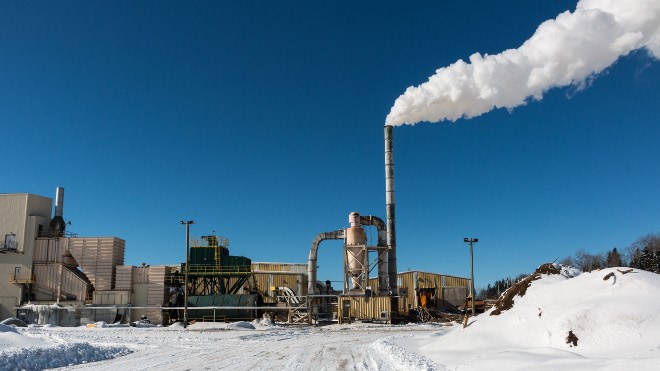 The new Northern Ontario owners of an Atikokan wood pellet plant are in expansion mode, with plans to add jobs, diversify their product mix, and explore export opportunities.

BioPower Sustainable Energy Corporation, a green energy startup, has taken control of the former Rentech plant, which has an existing supply contract to provide the nearby Ontario Power Generation (OPG) Atikokan plant with commercial-grade pellets.

BioPower is a spinoff venture of True North Timber (TNT), a Chapleau forestry contractor. The fledgling company issued a news release announcing the purchase on March 29.

TNT had signed an asset purchase agreement on Dec. 11, through a numbered company, to buy the Atikokan mill which was put up for sale by debt-ridden Rentech last fall.

The bankrupt California company is selling off its North American assets and winding down the business. Rentech operated wood pellet mills near Atikokan and Wawa.

For BioPower CEO Mark Guillemette, Atikokan is a strategic pickup in the parent company’s plans to enter new markets by producing residential heating pellets for North American and international markets. The mill acquisition price was undisclosed.

A 10-year employee at TNT, Guillemette said in an interview that this venture represents a new evolution for the company.

“The Atikokan facility ended up being good timing for us," Guillemette said. "For the past three years, we were hunting for something different to do to take forestry to the next level, in our opinion, than what we were currently doing.”

Guillemette admitted the wood pellet manufacturing business is an entirely new field for them, but they’ve done their homework.

“It’s a learning curve, no doubt," he said. "We’ve been learning for the past three years, so we’ve educated ourselves as much as we can and surrounded ourselves with people who are willing to help us learn what they’ve learned as well.”

The Atikokan mill provides TNT with a relatively turnkey operation, an experienced workforce running the facility, and a contract in place – up to 2024 – to supply OPG with 44,000 tonnes annually.

But the new owners want to boost production to reach the mill’s full 110,000-tonne capacity by diversifying their customer base and hiring more workers to tap into the domestic and international home heating markets.

“It’s not something we need to get into, it’s something that we want to get into,” said Guillemette. Italy is one targeted export market.

“We’re working on it now," he said. "We’ve sales consultants out pushing both domestic and export markets. We’re getting some positive feedback so we’re looking to roll it out as soon as possible.”

Guillemette said they have meetings scheduled in Montreal for April with contacts they made recently in Italy.

The Ministry of Natural Resources and Forestry will transfer the Crown wood fibre licences over to BioPower. Should they significantly increase production, Guillemette said they will not need any additional fibre.

“Resolute (Forest Products) been very helpful in guiding us in the right direction.”

Guillemette said the Atikokan mill remains in good shape, but the company wants to make some capital improvements this year, such as installing an automatic bagging line for that residential heating market.

Rentech’s former Wawa mill is also up for grabs but Guillemette said that facility is not in their immediate plans. TNT had been delivering fibre to the mill.

Rentech decided to idle the Wawa mill in February 2017 due to chronic mechanical problems and the cost associated with fixing it. The mill had been set up to export Northern Ontario-made pellets to Europe, but the company was forced to renege on a supply contract with a United Kingdom utility.

“It’s a pretty big undertaking,” said Guillemette. “It would be a little bit too big of a step for us at this time, so we never looked at it.”

He said they’re still keeping an eye on Rentech’s bankruptcy and liquidation process.

Though TNT had been laying low since the acquisition, Guillemette said it was time to publicly announce that the mill is still running and that jobs are safe.

“We want to bring peace of mind to the local employees. They went through a time of uncertainty – there’s no doubt," he said.

"It’s our mandate to grow the place but we don’t need to. The place is very stable. We’re very comfortable doing what it’s doing today.”

Atikokan Mayor Dennis Brown is pleased that the new ownership has ambitious expansion plans for the mill based on his brief conversations with Guillemette.

“Any discussions I’ve had with him he’s very positive," Brown said. "He’s very innovative, too, and I’m sure he’ll come up with some new products that they’ll develop over in the building.”

Brown said the company is expected to make a full presentation at an upcoming council meeting this spring.

“Mark went over to Italy in February with some business people from Canada to try and get more sales," he said. "Maybe it was successful and it’s one of the reasons they’re going to do more. That’s good news for Atikokan.”