When it comes to the visibility of Northern Ontario’s five major cities, Glenn Miller wants to retire the tired, old emblems. Loosen the grip on Sudbury’s Big Nickel, he advises; see past the McIntyre headframe in Timmins.
Jul 3, 2014 1:29 PM By: Lindsay Kelly 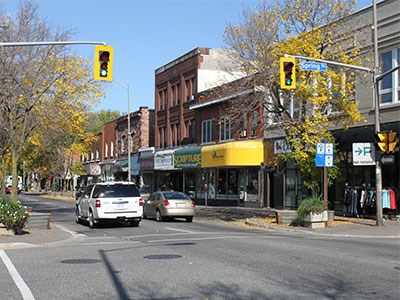 he results of a study by the Canadian Urban Institute indicate there have been successes in the downtowns of the North’s five major cities, but there is room for improvement. Work is ongoing in downtown Sault Ste. Marie.

When it comes to the visibility of Northern Ontario’s five major cities, Glenn Miller wants to retire the tired, old emblems.

Loosen the grip on Sudbury’s Big Nickel, he advises; see past the McIntyre headframe in Timmins. Rebrand the symbolism to better reflect the contemporary cities they’ve become by looking to the hearts of these communities.

“Wouldn’t you rather see a picture of a fabulous downtown park or something?” said Miller, vice-president of education and research at the Canadian Urban Institute. “It’s time to change the postcard.”

A new study conducted by the institute focuses its lens on the downtowns of the North’s five major cities — Sault Ste. Marie, Thunder Bay, Sudbury, Timmins and North Bay — to evaluate how those downtowns are performing. Representatives of those cities gathered in Sudbury on June 21 to talk about the results and how they can inform planning.

Miller said the statistics help establish a benchmark to gauge the health of the downtowns, track the resurgence of interest in living downtown, and provide a single source of learning and networking for living downtown. City planners and downtown associations can use the resulting document to better strategize about future plans for their respective cities.

The institute used five indicators to set a benchmark for performance: visibility, visionary, prosperity, livability, and strategy. While there is always room for improvement, there have been some successes, Miller said.

The former St. Marys Paper plant in Sault Ste. Marie is currently being redeveloped as a tourism hotspot, while in Sudbury, the establishment of the School of Architecture is considered “one of the great success stories.”

Lakehead University in Thunder Bay has established its new law school in a heritage building, and Timmins started rebuilding a cluster in the downtown with a new public library and commercial buildings.

In 2010, the institute granted North Bay a Brownie Award for the redevelopment of former brownfield sites.

A benefit to all the cities has been the establishment of colleges and universities, which was a strategic move to try and slow the process of youth outmigration, while attracting people from outside the community to those communities, Miller said. Currently, 67,000 students are enrolled across the North.

The institute found that the big five’s downtowns face similar challenges: getting the appropriate share of investment relative to the wider city, the impact of amalgamation, the changing of public policy, concerns about livability, perceptions of safety, capturing their share of retail dollars, and dealing with suburban sprawl.

“The reason this project is potentially the key to the future is when you look at the economic projections and the economic performance, cities do better than the rest of Northern Ontario, and within the cities the downtown’s the place to create the critical mass of opportunity,” Miller said.

In Northern Ontario, the downtowns make up a small proportion of the municipalities. But the amount of tax revenue being generated by downtown indicates that investment in downtown is good value, he said.

Steve McArthur, a planner with the City of North Bay, said the study piggybacks on efforts the city has made in the last few years in its downtown — everything from a business retention and expansion study to increasing the police presence. The city will launch its first vacant building tour this summer, a move that’s seen an overwhelming response from building owners, he said.

There has been a concerted effort to collectively work towards making downtown a more vibrant and thriving place, McArthur added.

“We’ve had a culture shift in North Bay where we’ve had our building and our fire departments really turn our heads to economic development and how important that is for the city,” McArthur said. “So rather than going in with a hammer and being enforcement-driven, they’re really trying to get on board and do what they can to assist, which is refreshing.”

He’s hopeful the stats will show where there are gaps in the city’s budget and capital dollar allocations, so it will have a better idea of where it needs to invest.

Thunder Bay is equally interested in using the numbers to ensure investment dollars are used strategically, said Leslie MacEachern, a planner with the city.

“I think one of the key messages the study has reinforced for us is the importance of encouraging residential development in the downtown,” MacEachern said, noting that it’s the people living in the downtown who will provide the city with the motivation to grow.

The Canadian Urban Institute study is part of a larger project involving studies on 17 additional downtowns in cities across the province. The data will be compiled on one website, and the resulting statistics can then be used by municipalities to move forward with plans.

It’s all part of a move towards developing a clearer, more defined vision for the province’s downtowns, Miller said. Partnerships and support from all levels of government will be integral to success, as will the data gleaned from this study.

“When you’ve got a good story to tell, it becomes that much more credible if you have the numbers to back it up,” Miller said. “Downtown investments do benefit the wider city; it’s a good return on investment, it helps reinforce the city’s overall competitive position, and it influences the economic prosperity and culture.”