It’s been a busy start to the year for North Bay ’s planning services department, in terms of development applications. While larger projects usually garner most of the public’s attention, they aren’t the only ones that are dealt with.
0
Jun 13, 2013 5:55 PM By: Liz Cowan 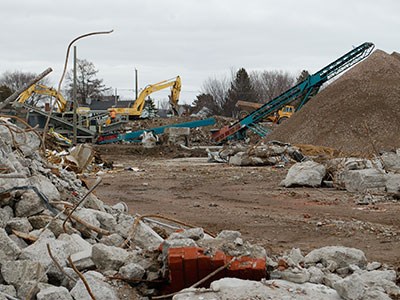 Only rubble and piles of sand remain at the former Scollard hospital in North Bay. A residential project is planned for the site, which may begin this year.

It’s been a busy start to the year for North Bay’s planning services department, in terms of development applications.

While larger projects usually garner most of the public’s attention, they aren’t the only ones that are dealt with.

“There are one-offs, infills and severances that just happen without fanfare,” said Beverley Hillier, manager of planning services. “These property owners want to make investments in their properties. They are not major developers, but they are creating opportunities.”

Some recent applications include a new apartment building on Trout Lake Road on a vacant parcel of land.

“It would be the first private-sector apartment building, other than conversions, that we have seen in quite some time,” said Jerry Knox, the city’s CAO.

The Perut Place subdivision, also in the Trout Lake area, will be seeking final approval of the next phase.

“There are currently about 20 or so homes there now, and they had draft approval about five or six years ago,” Hillier said. “It will be a combination of singles, and a parcel allows for multi-type residential. There will be a fair amount of development in that area of the city.”

A developer is also going through a zoning bylaw amendment for a vacant piece of land, also on Trout Lake Road, to change the permitted uses.

“There is no plan yet for the type of commercial building, but it was zoned commercially 10 years ago,” she said.

The Sage Road development, also in the Trout Lake area, will include 140 units and be a combination of singles, row houses and town houses. The development is meeting some opposition from area residents who have environmental, density and traffic concerns.

New North Developments, in the West Ferris area, is planning a future subdivision behind the Best Western.

“There is a demand for new homes, but it is really utilizing existing infrastructure to get that infill. The potential Trout Lake Road projects are infill as well, so that is really positive.”

If not sold, demolishing the two buildings would have cost the city $3 million to $4 million, before selling the four hectares of land they occupied.

The developers, ARG Devco and the Walford Group, have plans to use the sites for residential development. The Walford Group owns retirement facilities in Timmins, Sudbury and Thunder Bay.

The Scollard site will include a combination of semi-detached and single dwellings, and a combination of town houses and vacant land condos, totalling 48 units. Nothing has been submitted yet for the other site.

Knox said the development will be complimentary.

“They are talking $250,000 plus in terms of price range, and they want to get started this year and if not, then next year. They are looking to partner with some local builders, if possible,” he said.

At the new industrial park at the airport, construction for one tenant is completed and a second is nearing completion. An agreement in principle has been reached for the sale of some land for a potential third tenant.

“The airport board is also putting some dollars into the old Alert hangars which will make that space available,” Knox said. “And we are always having ongoing discussions with other developments within the new industrial park.”

The city offers tax incentives at the site, along with rebates of municipal fees.

Along Pinewood Park Drive, which leads to Callander, a new sewer and water system will be installed. It will assist current businesses and will open up another 20 acres of commercial land.

“It will help spur some investment and development along Pinewood Park Drive,” Hiller said.

On the retail side, a new Giant Tiger opened in May and Walmart and Sobey’s are undergoing expansions. Target is renovating a former Zellers store and is expected to open this summer.

Stockfish Ford’s redevelopment and expansion is a $1.5 million project, and Canadore College is building a $730,000 Innovation Centre for Advanced Manufacturing and Production at its Commerce Court campus. It also has plans for a new residence.

“There is still a lot of confidence in the city, so it is full steam ahead,” said Peter Chirico, managing director of community services for the city.

First Nation community ready to cut ribbon on water treatment plant
Feb 11, 2020 10:52 AM
Comments
We welcome your feedback and encourage you to share your thoughts on this story. We ask that you be respectful of others and their points of view, refrain from personal attacks and stay on topic. To learn about our commenting policies and how we moderate, please read our Community Guidelines.