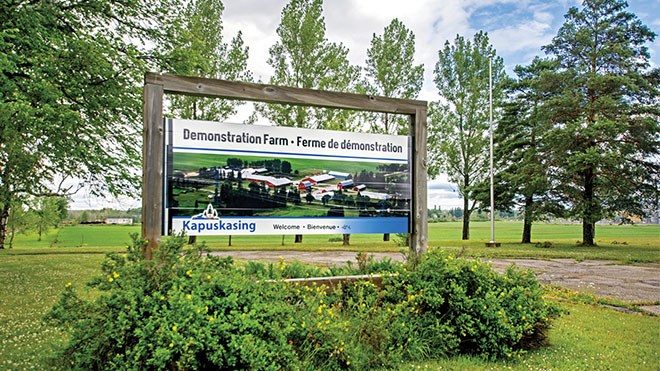 The Town of Kapuskasing has secured a new tenant for its demonstration farm. Rogers Crop Enterprises took over the lease last summer, and will be growing cash crops at the farm. (File photo)

A new tenant has taken up residence at the Kapuskasing Demonstration Farm, with plans to eventually purchase the acreage and expand his successful cash-cropping business.

Last summer, Jim Rogers took over the lease at the demonstration farm, relocating his family and his business, Rogers Crop Enterprises, to Kapuskasing from North Battleford, Sask.

Finding a new farmer so quickly after the former tenant broke his lease last April was welcome news for the community, said Guylain Baril, who heads up Kapuskasing’s economic development department.

And the family has integrated well into the area.

“They’re a good addition to our community,” Baril said. “They’re very engaged, and they believe in small communities, and they’re very good citizens and very good tenants for the Town of Kapuskasing.”

After farming operations ceased at the facility – a former agricultural research farm established by the federal government in 1916 – the Kapuskasing Economic Development Corp. purchased the property and its assets in 2015 with the intention of seeing it continue to operate as a working farm.

The property encompasses more than 850 acres of land for animal production; a 5,000-square-foot business incubator equipped with a boardroom, offices, a laboratory and equipment; and land available for crop trials and research.

Specializing in growing canola and white peas, Rogers Cash Enterprises has been buying land in Kapuskasing for the last two to three years, but decided to make the move permanent after the research farm became available, Baril said.

Rogers will lease the land over the next two years, completing the original five-year lease agreement, after which he has the option to purchase the facility from the town.

Baril said the farmer has been clearing and tiling land and seeding will begin in the spring.

Although the operation will focus on cash crops only, Baril said it’s still encouraging to see food production activity return to the area, which had long been an agriculture hot spot before the focus shifted to logging.

“We do have a rich farming heritage in Kapuskasing, but it’s 100 years old, and it’s been shelved for so many years,” Baril said. “We’ve almost lost it – we’ve got much more of a forestry heritage now – and it’s kind of nice to see farming coming back, especially at that location.

The farm originated as a work camp for prisoners of war, who cleared most of the land and constructed the buildings on the property, Baril said.

Later in the 1920s, as demand for paper products grew, the New York Times and Kimberly-Clark jointly launched the Spruce Falls Pulp and Paper Company, building a mill in Kapuskasing to secure a steady supply of pulp for newsprint and paper products.

The mill continues today, under the operation of Rayonier Advanced Materials, which produces 220,000 metric tons annually of newsprint and controlled bulk paper for mass-market paperback book publishers and commercial printers.

“People came here farming in the summer and logging in the winter. That’s what everyone did,” Baril said. “But the logging and pulp and paper operation really took a much larger stance and farming was kind of put aside for many years.”

To support the return of agriculture return to the area, the town made it a priority industry in its 2012 strategic plan, and actively promotes affordable land prices and government funding programs available to assist farmers.

Currently, most operations in the area are part-time or hobby farms, but with the return of a full-time tenant to the demonstration farm, and a rising interest amongst consumers in eating locally grown food, Baril is hopeful this marks the start of a resurgence of farming as a viable industry.

“We wanted to demonstrate to anyone else what this farm was capable of,” Baril said. “And we've been wanting to put a good tenant through the farm and eventually a good owner to be able to demonstrate to others in the in the areas in the area that this is possible in Kapuskasing.”

Gay Lea Foods CEO butters up Thornloe Cheese
Feb 19, 2020 3:00 PM
Comments
We welcome your feedback and encourage you to share your thoughts on this story. We ask that you be respectful of others and their points of view, refrain from personal attacks and stay on topic. To learn about our commenting policies and how we moderate, please read our Community Guidelines.