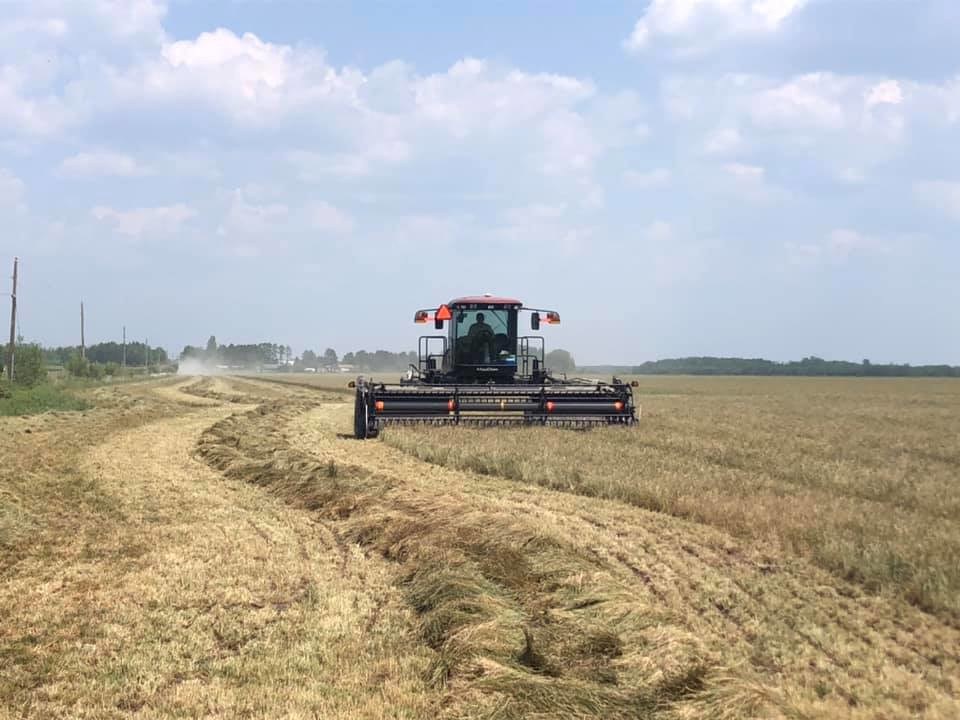 In 30 years of farming, Scott McNabb has never seen conditions in northwestern Ontario as dry as they are now.

With temperatures remaining in the 30s and the region receiving little to no precipitation, crops are failing and pasture grown to feed cattle is in short supply, forcing producers to take drastic measures.

For McNabb, a fourth-generation Hereford cattle producer from Stratton, west of Fort Frances, that means selling off some of the animals he can no longer feed.

“I have shipped out 140 head in the last two days; there will be another 70 going out at the end of the week,” he said.

Their goal was to identify some of the issues producers are currently facing and try to come up with solutions that would offer a measure of relief.

Listening in was Lisa Thompson, the provincial minister of Agriculture, Food and Rural Affairs, who assured producers that “your situation, your crisis and the ramifications of this crisis are being heard loud and clear.

“We want to make sure you know that your farm operations are supported, because this is an unprecedented time and this drought has indeed been hard-hitting.”

The dry conditions are part of a larger, cross-country drought sweeping the industry.

In many regions across Canada, townships have declared a state of emergency, which enables producers to qualify for targeted money to help them purchase feed, or adopt other mitigation measures to get them through the crisis.

Craig McLaughlin, the eastern director for the BFO, said it's a move wholly supported by his organization.

“Producers need support now, and I would encourage Minister Thompson and (federal agriculture) Minister (Marie-Claude) Bibeau to expedite any action taken in response to this drought to ensure we don't lose producers, cows, or infrastructure,” McLaughlin said.

Among its recommendations, BFO is calling for a 'feed need drought resistance program,’ which would cover the cost of feed on a per-animal, per-day basis.

McLaughlin said such a program would give producers enough flexibility to “make useful management decisions when purchasing alternative feed sources to maintain their cow herd.”

Producers are also seeking some give when it comes to converting crops to be used for feed – without incurring a penalty – and a subsidy to help with transportation costs should cattle need to be moved out of the region.

Talk of funding is all well and good, McNabb said, but it's likely too late to help most producers.

Farming on a century-plus acreage first acquired by his great-grandfather in 1919, McNabb said not only does he not have enough feed for his cattle right now, but he'll have no winter feed either.

The same scenario is being played out across the country.

“There is no feed to come from anywhere,” he said. "Just to get that apparently clear: unless there's something a long ways down east, there is no feed available. Alternative feed sources? They're not available either.

“You need to know this is a little bigger than just putting a BandAid on it. We have to do something different."

The situation isn't any better for cash crop producers.

Another Rainy River-area farmer, Timo Brielmann, has been fighting bug infestations all season.

First it was flea beetles in the spring, and then it was grasshoppers chewing through his crops. Now, he's got aphids going after his corn.

“The corn is in pollination now, and we're getting concerned that there aren't enough silks to get the flowers into the cob,” he said.

From a distance, his fields look green and thriving, he said, but a closer look reveals wilted plants whose development has been stunted by a lack of moisture.

Soybean plants are losing their valuable pods, and the flowers on his canola plants are shrivelling from the heat.

Now, Brielmann is concerned about how the current situation is going to impact next year's season.

“If it stays this dry, I don't know how we're going to do tillage in prep for next year,” Brielmann said. "The ground is so hard.”

It's been an eye-opening situation for Kerry Gross, who farms with her husband Brodie on KB Ranch just west of Fort Frances.

Launching their enterprise in 2019, the couple employs sustainable farming practices, finishing all their own animals to produce steaks, roasts and other cuts of beef, as well as offering a meat box that's delivered to customers weekly.

They also assist in the operation of Circle H Farms, a cattle operation owned and operated by her husband's family.

Gross was frank in her assessment of what's happening in the northwest.

"We are having a very hard time,” she said, her voice breaking. “I don't know how we're going to be able to keep going with this, to be honest.”

Even with employing the practice of rotational grazing – moving animals between pastures regularly to give the grass time to regenerate – Gross said their pastures haven't grown at all. Any grass that is available is quickly being consumed by grasshoppers.

After their on-farm water source dried up, they began hauling water to the farm, Gross said.

They're now speaking with neighbours about the possibility of accessing some of their bushland in the hope there's some grass there the cattle can eat.

They haven't quit yet, but it's been an emotional time for the family, and Gross isn't optimistic about the future of her farm.

“Being new producers, I don't think we're going to make it through this.”

Producers struggling with the impact of the ongoing drought on their mental health are encouraged to access the following resources:

Province pitches in for cattle barn rebuild in northwestern Ontario
Jul 8, 2021 11:30 AM
Comments