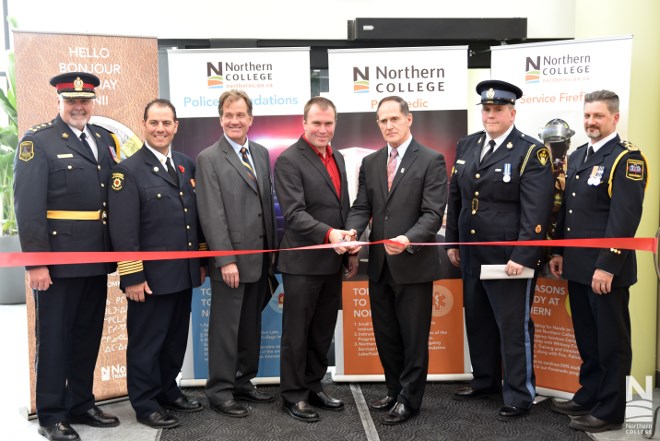 When Fred Gibbons took over as president of Northern College in 2009, his main focus was to staunch the migratory outflow of young people exiting Northern Ontario to study in the south.

“We had to find options to keep the students here, as opposed to giving them reasons to leave. “Growing back our student population was Job No.1.”

In a competitive recruiting environment, the college needed to offer the kind of programming that would keep students at home and also be more intuitive to the needs of employers.

Moreover, they had to provide an engaging learning environment with state-of-the-art facilities and learning tools at their four campuses in Timmins, Kirkland Lake, Haileybury and Moosonee that would pass the eye test of prospective students.

For nearly a decade, Northern College has added significant square footage at its Timmins Campus by cutting the ribbons on a Centre of Excellence for Trades and Technology, an East End Family Health Team Clinic, and, this fall, opening the doors on a new Integrated Emergency Services Complex.

The latter is a 40,000-square-foot facility housing the Pre-Service Firefighting, Police Foundations and Paramedic programs under one roof, providing students with a challenging interactive learning environment.

“We hope with this building and the technology we can offer our students, we’ll become recognized as a Centre of Excellence,” said Sarah Campbell, Dean of Health Sciences and Emergency Services.

ADMS can create a multitude of natural and man-made disasters that can be manipulated by instructors to provide visually realistic, real-world situations.

“The critical decision-making that students have to make on the fly happens in this training,” said Campbell.

Outside agencies including municipalities, mines, first responders, volunteer organizations, schools, and hospitals can also access the Advanced Disaster Management System simulator through the College’s Northern Training Division. The simulator allows these organizations to assess their operations protocols during what can be continuously changing emergency situations. The system also allows these teams to work together.

Offering virtual reality training for high-risk professions has placed Northern College as a technological frontrunner in the Ontario college system.

“Simulation is the way to go,” said Audrey Penner, Northern’s Vice-President of Academic and Student Success.

With high-tech, 3-D video cameras, monitors and virtual reality glasses, the college’s Virtual Reality Training Centre offers an immersive 360-degree experience for the college’s array of trades programs in construction, maintenance, mechanic and millwright, and heavy-duty equipment technicians, among others.

These interactive experiences extend themselves to a multitude of applications, including nursing where students can troubleshoot the computer-generated symptoms of a patient simulation training mannequin.

Learning in new and innovative ways has Penner thinking about the next iteration of applied technology, particularly, how can artificial intelligence (A.I.) be integrated into their environment?

The college is studying the impact of A.I. to understand how it will shape future programming.

Being responsive to the rapid changes in technology means Northern College must be flexible and adaptable to build the core skills of the 21st century worker.

Their Virtual Reality in Education program won them a silver award in the Access to Learning and Employment category at the World Federation of Colleges and Polytechnics in Melbourne, Australia in October.

A proponent of interdisciplinary education, Penner points to distance learning technology as eliminating geographical barriers in allowing students from different disciplines, on far-flung campuses, to work collaboratively on group projects.

Distance learning has always been deeply embedded into the culture at Northern College.

“We have classes where the professor has people directly in front of them but also simultaneously webcasting or video-casting to two or three other campuses,” she said.

The college is widely acknowledged as experts in distance learning through correspondence, video and web-based courses.

“As a small college in the North, we have to service a population that’s spread over an area the size of France,” said Penner. “That’s something we’ve had to do from our inception 50-odd years ago.”

The socio-economic impact of Northern on the region’s economy and its communities is vast.

A recent Emsi Labor Market Analytics study revealed that the college had a $125-million effect in the Cochrane and Temiskaming districts.

That impact equates to 1,615 jobs, which accounts for 2.4 per cent of the gross regional product, placing Northern as the 11th largest “industry” in the region.

The college’s annual payroll for its 508 employees amounts to more than $29 million. And of the 487 students attending Northern from outside the region, they account for an estimated $1.6 million in new spending.

As they continue to recruit further afield, the college expects those numbers to improve as 72 per cent of students attending class at the four campuses tend to stay after graduation.

To the college, the high rate of retention from its alumni has translated to a regional gross economic contribution of almost $86 million across many sectors.

College president Fred Gibbons said they’ll use this data in an awareness campaign to share with industrial partners, communities, government funders and in student recruiting.

As the domestic student pool shrinks, the college is looking at new markets of opportunity.

“Southern Ontario is a natural one for some of the niche programs we have, with the capacity to take on more students,” said Gibbons, alluding to their veterinary sciences program at the Haileybury campus and health sciences and technology programs of the Timmins campus.

But Northern is also looking abroad where they’ve had “phenomenal success” in attracting international students and growing that base from 70 students in the fall of 2017 to currently 500.

Northern Training Division continues to make its mark in supplying customized training solutions for communities, business and industry, especially in catering to the rebounding mining sector through its Underground Hard Miner Common Core program and its Surface and Underground Diamond Driller Common Core programs. The program graduate employment rates are as high as 95%.  The division is known for partnering with mines, institutions and industries around the world to develop unique training programs that align with area needs while working to develop long-term sustainability and a thriving economy.

Executive Director of Community, Business Development, and Employment Services Christine Heavens, notes that: “Education and economic success go hand-in-hand. Partnerships and collaborations help us to ensure that no ask is impossible as we work together to support the region.”

The lack of skilled tradespeople in Canada is reaching at almost-crisis levels in some fields, said Aaron Klooster, Dean of Trades and Technology.

In reaching out to lay people interested in a career in the trades, Klooster seeks to steer them into lesser known fields where the labour need is the greatest.

“Any of the STEM (Science, Technology, Engineering and Mathematics) fields are looking very good for us right now,” said Klooster. “We’re seeing a lot of employment stability and prospects, not just in our region but across the province and even nationally.”

There’s a dire need for heavy equipment operators in the mining industry, welder-fitters, millwrights, instrumentation technicians, and automotive mechanics where well-paying job opportunities, post-graduation, are almost assured. The college is prepared to help communities build the skilled workforce required to address the need.

“We’ve regularly had students walk out of here and been approaching six figures and over with an initial salary offer with some companies in the welding and engineering field,” he said.

The colleges in Northern Ontario are also collaborating in a novel way by pooling their resources to collectively offer programs like a mechanical engineering advanced diploma, something no individual college could offer on its own.

“With outside-of-the-box thinking, distance and video delivery, those students will get what they want and they can stay in this region,” said Klooster.

Getting the word out to students, high school guidance counsellors, and recruiters on their program successes is the thrust of Northern College’s Study, Stay, Play marketing campaign.

Through the use of social media platforms, billboards, TV, radio and magazine advertisements, they’re not only hoping to entice students to stay home to study, but lure southern Ontario and international students to come north with a big promotional push on the health sciences, trades and technology programs.

“When we’re recruiting, we’re promoting the opportunity of an education but also the lower cost of living in small, safe communities with great part-time work while you study, and when you graduate there’s also a great opportunity (of employment) within your field,” said Jaret Dicks, Manager of Marketing, Communications, Student Recruitment and Alumni.