During it's annual Days of Action campaign, the Carpenters District Council of Ontario offers education on the implications of tax fraud
Listen to this article
00:07:18

The Carpenters District Council of Ontario (CDCO) is holding its annual Days of Action campaign April 11-16 to raise awareness through media initiatives on the far-reaching negative impact of the underground economy on the province and its municipalities. 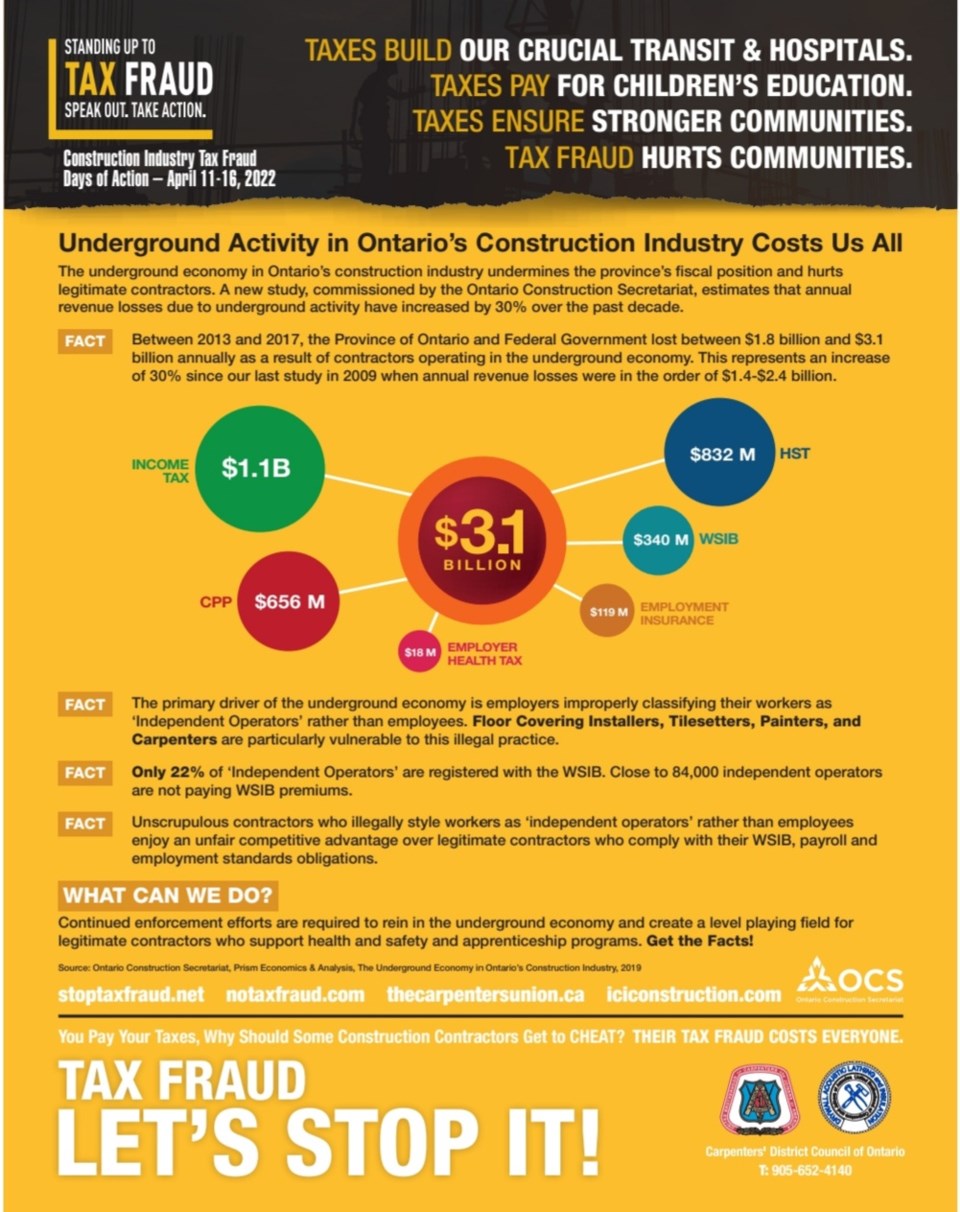 Although the CDCO continues a long-standing battle against tax fraud, it remains a pressing problem.

“Obviously it is not just the Carpenters (union) that is losing funds to the underground economy,” says Mike Yorke, president of the Carpenters District Council of Ontario. Think of the lost provincial and federal revenues estimated at $1.8-$3.1 billion annually from 2013 to 2017, according to a study commissioned by the Ontario Construction Secretariat, he points out.

“Addressing the problem is especially important now as we come out of the pandemic. COVID-19 illustrates just how important a well-funded health care system is to our society and the underground economy hurts that by taking away tax revenue needed for its support.“

Tony Iannuzzi, executive secretary treasurer of the Carpenters council, agrees. “I truly believe that this is a time to really focus on tax fraud. There are millions of dollars out there that we don’t have to take from this sector to give to this sector. There is money there that should be collected and put in healthcare and infrastructure and so on, so forth.”

Cash under the table deals also jeopardize education and other infrastructure spending in the province.

“Through COVID-19 we have seen huge impacts on the social pillars of our society to our healthcare and schools that have exposed their vulnerabilities. There is so much investment needed in terms of retrofits and rebuilding outdated institutions that have been neglected for the past few decades,” Yorke says.

It also appears that Canada will be investing greater amounts on defence – “another reason we have to address this problem now,” points out Yorke.

Jason Rowe, Canadian district vice-president, United Brotherhood of Carpenters, says raising taxes on every-day Canadians is not an option to addressing tax fraud. “You’re going to steal resources from another area to give to the deficit? That’s not going to be acceptable, governments know that.”

The study by the Ontario Construction Secretariat breaks down the $3.1 billion annual lost tax revenues to include about $1.1 billion in income, $656 million in Canada Pension Plan contributions, $18 million in Employer Health Tax, $119 million in employment insurance, $340 million in WSIB payments and $832 million in HST revenues.

To get around paying tax, some contractors classify their workers as “independent contractors” rather than employees.

Yorke says another “unscrupulous” means of avoiding tax is companies who label themselves labour brokers send workers to various contractors similar to how many undocumented Mexican workers are sent from one employer to another in the southern U.S. As labor brokers, contractors skirt the necessary tax and WSIB obligations by lowering their income tax and payroll tax responsibilities.

Yorke says the trades most vulnerable to this illegal practice include floor covering installers, tile setters, painters and decorators and carpenters. Unfortunately, the underground economy is growing, as independent contractors are becoming a larger share of the construction labour force.

The end results – jobsites can become dangerous because tax fraud carpenters are apt to hire unskilled or under-skilled workers. “They have no training regulations, no WSIB contributions so if any of these workers are injured they won’t be protected.”

Evan Reid, coordinator of the Local 1669, Thunder Bay, says by comparison to some areas in the province tax fraud is small scale in the region. “It’s somebody framing a house for cash, renovating a basement after hours . . . doing a small deck. It’s more of a side job than it is large projects that want to hire independent contractors and try and cheat the system.”

“I can see it being a problem in some places when it is a large dollar value because the government is missing out on tax revenues which are needed to build our infrastructure,” Reid adds. “I appreciate the work that the Carpenters Council does and the international office for that matter for bringing it to the forefront through Tax Fraud Days.”

While CDCO’s tax fraud campaign focuses on large construction sites, Yorke points out homeowners who pay their builders cash for small renovations could face liability for accidents during construction because those homeowners are deemed employers.

CDCO has proposed some solutions to eliminating tax fraud, including fair wage policies at municipal and provincial levels and it aims to play a role in federal committees that target tax fraud. The City of Toronto’s 100-year-old fair wage policy is one to emulate, says Yorke. It ensures that all employers hired for construction must adhere to its wage, benefits and vacation pay standards.

“It’s similar but not to the same degree as how the union has collective agreements with employers.”

Toronto also has a fair wage office to ensure contractors meet their obligations and are not exploiting their workers. “It would be a great solution for the provincial government and other municipalities so all the employers in the province are playing by the rules.”

One initiative by the international carpenters union (United Brotherhood of Carpenters and Joiners of America) is to add its findings and resources to the work of the CRA Underground Economic Advisory Committee.

On another level, the federal government could study the feasibility of imposing stronger and enforceable rules for owner and prime contractor owner/liability that could act as a deterrent to tax fraud and the underground economy. Provincial governments could research this issue, consult with impacted groups and make legislative recommendations within a specific period of time, suggests Yorke.

Ron Johnson, executive director of the Interior Systems Contractors Association of Ontario (ISCA) is pleased with the campaign efforts by the Carpenters’ to raise awareness of the magnitude of tax fraud. ISCA, a partner to the Carpenters and the Painters’ unions, trains apprentices in four skilled trades. Johnson is also executive director of Interior Finishing Systems Training Centre (IFSTC).

“I do get frustrated at times because you constantly see how the employers I represent are losing work to illegitimate contractors who are not paying their fair share. Tax fraud really does hurt us because we have spent a lot of resources with our Union partners in training young people how to work efficiently and safely,” says

Johnson fears that if the economy slows, tax fraud will “become a much bigger problem”, if solutions aren’t found. “All parties have to take it more seriously but there are solutions out there and we have to all work together to come up with them.” 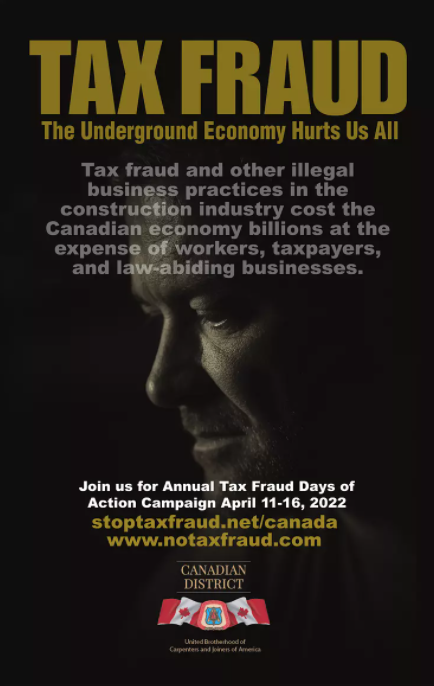 Here is your invite to the United Brotherhood of Carpenters’ National Apprenticeship Competition
May 12, 2022 4:20 PM

Spectrum Group – A look at the company one year after acquiring Steel Communications
Apr 27, 2022 7:00 AM

A happy accident: Woman finds her home in Timmins
0