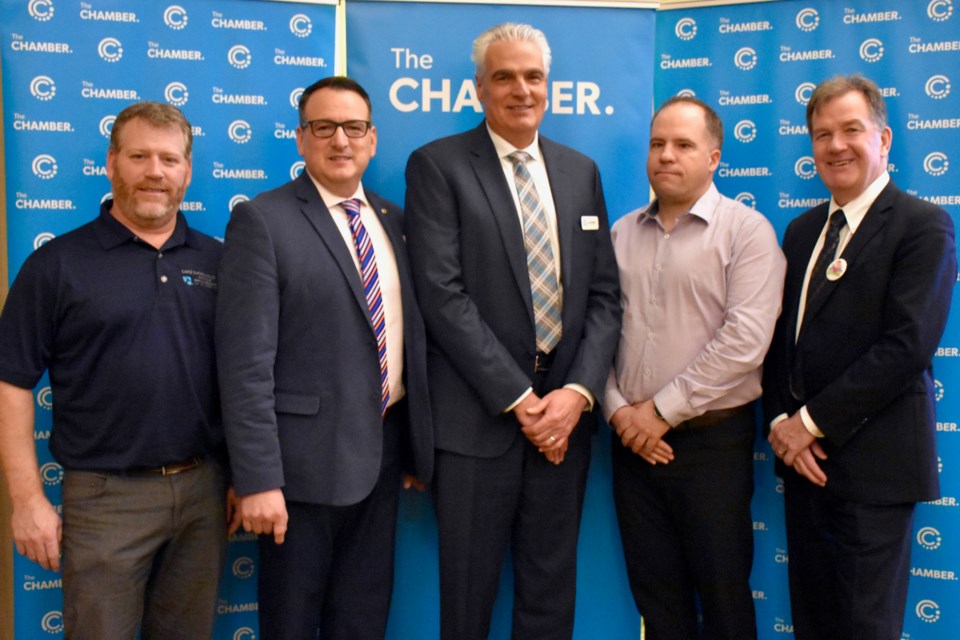 Greg Rickford (second from left), minister of energy, northern development and mines, and Indigenous Affairs, spoke at the Timmins Chamber of Commerce's State of Mining on Jan. 28. (Maija Hoggett/TimminsToday)

The provincial government has an ambitious agenda for the mining sector, according to the minister of energy, northern development and mines.

Greg Rickford was in town this week for the Timmins Chamber of Commerce's State of Mining event. He talked to about 100 people about the industry and what the government is doing to make business easier.

The most pressing issue, according to Rickford, is making sure that mines move to market in a timely manner.

"We have to make sure that the system from start to finish responds to how the market treats commodities, particularly mines and their minerals, and that’s what we’re working on,” he said.

An important focus, he said, is also making sure that Indigenous communities and businesses have the chance to compete with businesses supporting or directly involved with mining activities.

In 2019, three new Ontario mines went into production, including Newmont's Borden Mine, an all-electric site near Chapleau.

Rickford said the cost structure of the electricity system is distorted, complex, and uncertain.

Moving forward, he said, the challenge is protecting the Northern Industrial Electricity Rate, which he noted is a subsidy, and providing certainty for businesses wanting to be more green.

"Borden, of course, near Chapleau made a commitment to do that, but they’re still facing uncertainty in their cost structure and high prices. We want to make sure we strike an important balance between the costs of ratepayers and our industrial class electricity-intensive businesses and that’s the path that we believe we can take those mining operations down,” he said.

To stay connected to the ongoing challenges of the sector, Rickford said a mining working group has met four times. It includes himself and Premier Doug Ford, as well as people from across the sector. He told the audience at Cedar Meadows Resort and Spa that the group talks about substantive issues, regulatory matters, and policy options.

He said they're also working to remove regulatory burdens that are "red tape for the sake of it" and don't compromise safety or environmental sustainability.

"In the last tranche of legislation we were able to move five pieces out. We envision a bill that thematically could take a lot more out without compromising the incredible opportunities that we have with engaging and making full partnerships with Indigenous groups,” he said.