Rheault Distillery of Hearst has received a Leader in Innovation award from the province. It’s one of five Premier's Awards for Agri-Food Innovation Excellence that were awarded to agri-food producers across Ontario.
0
Nov 28, 2014 5:31 PM By: Northern Ontario Business Staff 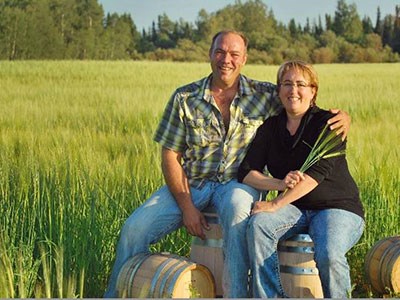 Rheault Distillery of Hearst, run by Marcel Rheault and Mireille Morin, has been recognized for innovation with a Premier's Award for Agri-Food Innovation Excellence from the province. (PHOTO SUPPLIED)

Rheault Distillery of Hearst has received a Leader in Innovation award from the province.

It’s one of five Premier's Awards for Agri-Food Innovation Excellence that were awarded to agri-food producers across Ontario. Rheault was the sole recipient from the North.

Rheault Distillery, operated by the husband-and-wife team of Marcel Rheault and Mireille Morin, produces an alpha vodka, which is distilled four times before completion. It follows a strict set of standards that were set in 1600s Russia by the Romanov dynasty, and sales have grown since the product went on LCBO shelves last summer. The distillery additionally produces whiskey, along with cherry and raspberry liqueurs.

Other award winners include Kaley's Acres of Castleton, for converting former tobacco fields into a successful kale production operation; A. Driedger Farms Inc. of Wheatley, for developing a self-propelled tomato harvesting machine that speeds up harvesting by 19 per cent; The Garlic Box of Hensall, for bringing back Ontario's commercial garlic production and developing a range of value-added products and flash-freezing whole peeled cloves; and Truly Green Farms of Dresden for running a carbon-neutral greenhouse.

With the announcement, Premier Kathleen Wynne also announced the new Growth Steering Committee, which will “identify and pursue future opportunities, and design a growth measurement system” to help the province’s agri-food industry expand and grow.