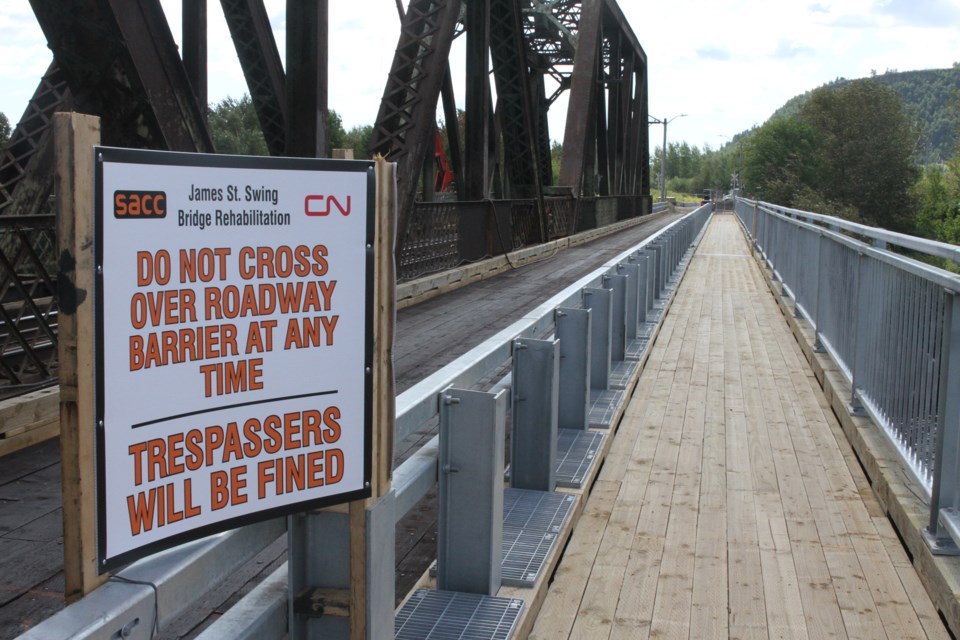 A spokesperson with CN Rail has confirmed that construction on the James Street Swing Bridge is expected to be completed by the end of 2019.

The railway company informed Dougall Media on Aug. 31 that construction on the southbound lane, which would allow vehicle access into Fort William First Nation, is complete.

The southbound pedestrian lane is also complete, and has been open to pedestrians for a number of months.

CN Rail said construction on both vehicular and pedestrian lanes for northbound traffic is now underway, and is expected to be completed before the end of the calendar year. The spokesperson said it will look similar to the completed southbound lanes.

Sacchetti Construction was contracted to repair the bridge.

The CN-owned century-old bridge, connecting Thunder Bay to Fort William First Nation across the Kaministiquia River, has been closed to vehicular traffic since a fire broke out on the northern approach spans on the evening of Oct. 29, 2013.

After a long legal battle between CN Rail and the City of Thunder Bay, the Supreme Court of Canada dismissed an appeal by CN in March of 2019, ordering CN to reopen the span to vehicular traffic.

Legal avenues pursued by the city in regards to the Swing Bridge case have cost more than $1 million, which Dougall Media learned last year through a Freedom of Information request.

In 2018, CN claimed the repairs would cost between $4 million and $6 million.

Impala aims for late May production restart at Lac des Iles Mine
May 8, 2020 3:00 PM
Comments
We welcome your feedback and encourage you to share your thoughts. We ask that you be respectful of others and their points of view, refrain from personal attacks and stay on topic. To learn about our commenting policies and how we moderate, please read our Community Guidelines.