Is there a repurposed future for Thunder Bay’s power plant? 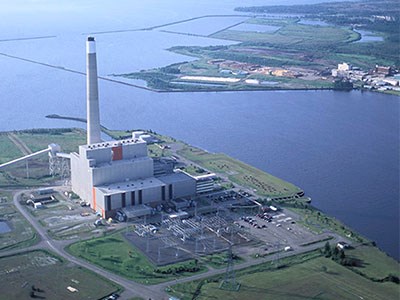 Doug Murray, the CEDC's chief executive officer, said they’re close to signing a confidentiality agreement with OPG to start the conversation of how the property and its buildings could be repurposed.

“Can we reposition it to do something else that’s not primarily power based?”

OPG announced last July it was permanently shutting down the 56-year-old facility, citing the high cost of repairs and operations.

The 300-megawatt power plant had been a coal burner for most of its operating life until the Ontario government converted it to burn specialty wood pellets, imported from Norway, and relegated it to a peaking plant in 2015.

It was sporadically fired up only during times of peak energy use, when additional power was needed on the provincial grid to meet demand.

As a power generator, the plant has outlived its usefulness.

Murray said there’s already an abundance of power in the northwest with more on way as construction begins soon on the East-West Tie transmission project to supply new mines coming online over the next few years.

The generating station is a sprawling complex of large buildings containing hundreds of thousands of square feet of space. The station occupies 53 hectares (131 acres) on Mission Island at the mouth of the Kaministiquia River delta. The stack is 198 metres tall.

The plant is also permitted to pull and discharge massive amounts of water from Lake Superior.

A concrete tunnel – used to transport coal to the plant by conveyor – connects the generating station to a marine terminal on neighbouring McKellar Island. But there are no natural gas connections to the site.

Murray wonders if the buildings, the equipment inside, and property can be repurposed for something like value-added forest products, or if the plant’s boilers can be used to produce steam-generated power to attract a new industry to town.

“To market it, we need to understand what’s there and what can be useful.”

Murray said it would be a tricky proposition for the city to consider buying it to power an industrial park venture, just from a power purchase agreement standpoint. He would rather the private sector take on that risk.

“At the end of the day, it could turn out to be site-cleared (demolished), but as we go through each step, we want to work with OPG to say, is there something else that this thing could be repositioned for?”

What to do with other local brownfield properties on the waterfront will also be part of an upcoming CEDC study as outlined in a new three-year action plan.

Over the course of Thunder Bay’s history, many sawmills, pulp and paper mills, and grain elevators sprang up on the shores of Lake Superior and on the Kaministiquia River.

The downsizing and consolidation of these industries resulted in a number of derelict, vacant but premium waterfront sites.

Pockets of industrial activity still remain east of the Canadian Pacific rail yards, but there are also areas that have been out of use for 10 to 50 years.

Murray said the CEDC is asking the question of how to restore those lands to productive use or possibly help property owners rezone and remediate them for softer uses.