Justin Frape has developed a fascination with a strange potion that’s sold in tiny apothecary bottles.
0
May 1, 2015 6:38 PM By: Ian Ross 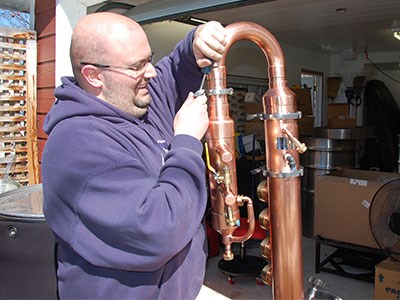 Justin Frape of Thunder Bay was assembling his still this spring in preparation to launch a new venture, Frape & Sons, manufacturing alcohol bitters.

Justin Frape has developed a fascination with a strange potion that’s sold in tiny apothecary bottles.

On a warm April day, Frape and his father were in his garage unpacking boxes containing components of his still shipped north from Kentucky and Tennessee.

Embarking on bitters is a radical departure from Frape’s previous profession as a tax specialist assisting small businesses with federal research and development credits.

After being introduced to Kentucky bourbon at a party, he began researching production methods and embarked on distillery tours.

“The more I dug into it, the more it felt like a calling. It’s science, it’s creative and it’s producing something. Rather than holding an amended corporate income tax return I can hold a bottle and say, I made this.”

His business partners are Jay Stapleton, owner of the Waking Giant Coffee, who’ll work on the formulations, and Jeff Burke of Brule Creek Farms, who’ll supply and mill grains like hard-red string wheat, rye and buckwheat.

The grains are fermented and distilled to form the alcohol base. The botanicals are infused using a vapour infusion technique to produce bitters. Frape said it will produce a flavour unlike any other on the market.

After being largely forgotten for decades, bitters are making a bit of a comeback.

“With the craft cocktail revival it’s been recognized as a finishing element,” or, as one local bartender conveyed to Frape, it’s considered the “salt and pepper.”

It’s highly concentrated stuff and is used by the dash – or an eye dropper – to flavour alcoholic and non-alcoholic beverages.

His first offering, a coffee-flavoured bitter, will show up at the local farmers market and on Amazon this spring. He’s also working on some national wholesale and distribution channels.

He’s approached an Anishinaabe medicine man to help with the botanical formulations and some farmers have offered to set aside test plots.

With a stockpile of chokecherries, blueberries and rhubarb, he’s entertaining the idea of producing between six and eight flavours. “There’s a quite a palate we can do with local ingredients.”

Eventually, he would like to expand into beverage alcohol. “I would love to make whiskey and gin.”

But the combined tax regime in Ontario is too cost prohibitive to establish a distillery in Thunder Bay, said Frape.

“The way the excise memoranda and the associated provincial legislation is written you can calculate that 78 per cent of the sale price of spirits go to the federal and provincial governments between environmental levies, excise duties, fees, freight, LCBO mark-up, etc, etc.”

“I have to put my corporate tax hat on and say, what is the best way to accomplish this? At this point, Ontario is not an environment that’s conducive to small distillers.”

Other jurisdictions in Canada and the U.S. have made tax exemptions or breaks for small distillers to encourage the agri-food sector.

“Minnesota is one of them,” said Frape. “The licensing is a fraction of the cost of small producers than for large.”

Should his distillery plan take root, he’s considering Hovland, Minn. where he has a handshake agreement with a local brewery to supply him with cooked wort.

Frape said the Wine Council of Ontario has been very effective at modernizing tax laws so they don’t lose the lion’s share of their revenue, but it’s an uphill climb for small distillers like him.

Indigenous entrepreneur's work wear line comes with a social message
Jan 27, 2020 10:00 AM
Comments
We welcome your feedback and encourage you to share your thoughts on this story. We ask that you be respectful of others and their points of view, refrain from personal attacks and stay on topic. To learn about our commenting policies and how we moderate, please read our Community Guidelines.