A cluster of communities along the North Shore of Lake Superior are evaluating if it makes sense to introduce liquefied natural gas (LNG) to their heating fuel mix.
0
Jun 1, 2016 5:35 PM By: Ian Ross 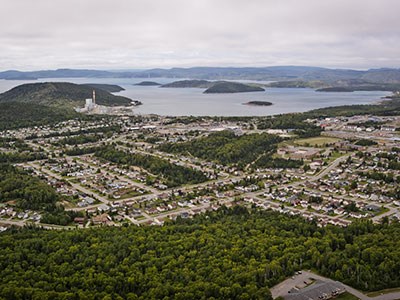 With no natural gas pipeline coming into town, Marathon is one of five communities on the North Shore of Lake Superior evaluating a proposal to have gas trucked in in liquid form from a gas-to-liquid conversion plant in Nipigon.

A cluster of communities along the North Shore of Lake Superior are evaluating if it makes sense to introduce liquefied natural gas (LNG) to their heating fuel mix.

Politicians and administrators in the towns of Marathon, Manitouwadge, Schreiber, Terrace Bay and Wawa will be pouring through the findings of a two-part feasibility study due in by the end of June.

The communities on the northeastern shore of Lake Superior – hundreds of kilometres apart – aren’t serviced by natural gas.

TransCanada’s natural gas pipeline comes as far east as Nipigon. To extend it further along the North Shore would be too costly due to the rugged terrain of the Canadian Shield.

Last year, the communities signed franchise agreements with Toronto’s Northeast Midstream LP for a project proposal to extend service to 11,000 residents and businesses through the use of LNG.

LNG is natural gas in a liquid state once it’s cooled to -162 degrees Celsius. As a fluid, it’s considered easy to store, can be transported long distances and still be economical to use as fuel to generate electricity, heat buildings and power equipment and vehicles.

By utilizing LNG, it’s believed the cost of heating homes and fueling businesses in the region can be reduced dramatically.

Rough cost estimates are that the average residential customer in the region could save $1,000 to $3,000 annually compared to other traditional heating fuels.

“For large industrial users in the area, one-quarter of their operating costs is energy. If we can cut a fraction of that off, or in half, we’re hoping this will drive new investment. It’s a real key piece of the underpinning of why we were so set at moving forward with LNG as an opportunity.”

The proposal involves building a gas-to-liquid conversion facility at Nipigon with the product being trucked to fuel distribution depots in the individual communities.

Skworchinski has few concerns about the reliability of supply by using the Trans-Canada Highway for transport.

For one, the natural gas pipeline at Nipigon is on the east side of the Nipigon River, which is fortunate should that bridge crossing ever be closed again.

LNG is new to Canada, but it’s popular in Eastern European countries, the U.S. East Coast and the Midwestern states.

“This is not a new technology,” said Skworchinski. “It’s very similar to what you’d have with propane where the communities have mother stations. I’m not sure of the length of time of supply, but certainly we would have enough if there was a minimal highway closure or a bridge fix.”

All will be factored into the feasibility study on the engineering side.

“We view it as the same as the handling of any traditional fuel that’s trucked, propane or fuel oil.”

Their business partner, Northeast Midstream, has a permitted LNG facility in Thorold and is the commission stage of that plant to serve industrial customers in the Niagara region.

Industrial players like Barrick Gold and AV Birla in Terrace Bay will be consulted separately.

After June 30, Skworchinski said the next steps are to meet with the province to share what they’ve learned, and hopefully, move forward with capital construction.

Queen’s Park introduced a Natural Gas Access Loan Program in the last provincial budget which the communities hope to tap into. The eligibility requirements remain a work in progress.

“They’re in the process of drafting those details,” he said.

For the most part, Skworchinski is largely sold on the concept “unless the numbers come back that it’s completely non-feasible because of insurmountable capital construction costs. We know in similar jurisdictions around the globe that LNG is very successful in lowering energy costs for residents and attracting new business for potential investors.

“We’re confident in what we’ve learned through gathering information that this is potentially a viable economic development project for us.”

Despite being located in an abundant fibre basket, Skworchinski said there are limitations to access Crown fibre and the Ministry of Environment and Climate Change has restrictions on emissions from burning wood.

But with the findings of both the LNG and the biomass projects in hand, Skworchinski said the Town of Marathon would make a determination by September on whether to move forward with the LNG project or both.

“In our situation, knowing that we’re situated in the middle of a world-class wood basket, a mix of natural gas and biomass are ideal in terms of sustainability. No question.”

Former Marathon EDO becomes a CAO
Oct 7, 2014 8:43 PM
Comments
We welcome your feedback and encourage you to share your thoughts on this story. We ask that you be respectful of others and their points of view, refrain from personal attacks and stay on topic. To learn about our commenting policies and how we moderate, please read our Community Guidelines.