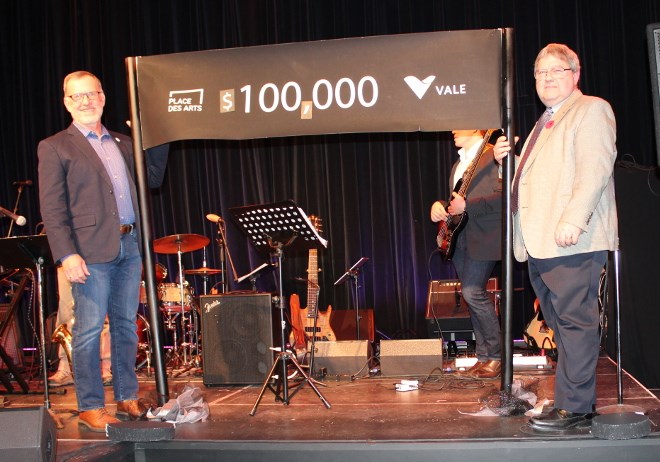 Vale has announced a donation of $100,000 to the Place des Arts building fund.

Construction on the $30-million cultural centre began on Oct. 23 in downtown Sudbury. When complete, the 60,000-square-foot building will include a bar and restaurant area with a capacity of 100 people, a smaller “black box” theatre with 150 seats, and a larger theatre with 300 seats.

As Northern Ontario’s first multidisciplinary arts and culture centre, Place des Arts will be home to eight cultural organizations and is expected to host 850 events in its first year, generating 50,000 admissions. Phase 1 of construction began on Oct. 29 and Phase 2 will follow in 2019. The estimated economic effects of construction are $18.7 million, with the creation of 180 jobs.

“Vale is proud to support Place des Arts and the future role it will play as a cultural hub in the City of Greater Sudbury and Northern Ontario,” said Ricus Grimbeek, chief operating officer for Vale’s north Atlantic operations and Asian refineries, in a release. “We look forward to the grand opening and celebrating this centre for the arts with everyone in our community for generations to come.”

Vale’s contribution brings the fundraising campaign to more than $1.275 million. Combined with the public funding already committed, the campaign is close to 92 per cent of its $30 million construction budget.

Additional funding comes from Canadian Heritage, FedNor, the Northern Ontario Heritage Fund Corp., the Ministry of Tourism, Culture and Sport, and the City of Greater Sudbury.