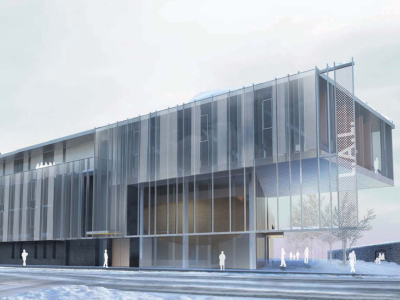 The pending arrival of the Laurentian School of Architecture is boosting interest in development in downtown Sudbury. The Downtown Village Development Corporation is spearheading a campaign to identify buildings for redevelopment as office and residential space.

It’s been 10 years since Susan Thompson and the Downtown Village Development Corp. (DVDC) embarked on an ambitious plan to revitalize Sudbury’s downtown core with new business and resident activity. Things are finally starting to pay off following the completion of the city’s master plan and the looming opening of the Laurentian School of Architecture.

After the success of its streetscape improvement pilot project, which included the installation of new street lights, benches and bicycle racks, the DVDC has focused on developing relationships with property owners and developers interested in transforming underutilized space, Thompson said.

The upper floors of older buildings are particularly attractive for repurposing as residences or office space, but they come with their own set of challenges. About four or five projects are ready to go, but Thompson said developers are “gun shy” about moving forward.

“There are reasons why it hasn’t happened,” she said. “People want to do the projects, but they’re very costly to do.”

Older buildings typically need extensive updating to meet current Ontario Building Code standards, which hikes the cost to redevelop properties. Add to that a lack of parking space, and developers are reticent to move forward because they aren’t seeing a feasible return on their investment, Thompson said.

The DVDC is actively working to develop financial incentive programs, which Thompson believes could provide the impetus needed to get some projects going. She points to other cities, such as North Bay or London, that have been successful with redevelopment because of initiatives like upgrading loans or per-unit cash grants.

Naysayers criticize the use of taxpayers’ money to develop private-sector projects, but Thompson said studies show the money is paid back in about seven years, in the form of increased property assessments.

“We’re focused on reaching a point where the investors who are interested in doing the projects get out of the gate with them and helping them through all these hurdles, and hopefully help to facilitate the right climate for these investors,” she said.

Introduced by city council in January, the Downtown Master Plan and Action Strategy proposes 61 actions that can improve the downtown core. Included is a plan for an “innotech park,” which would house a cluster of office spaces in the downtown.

Thompson said there is a host of stakeholders eager to invest should the park go ahead; their enthusiasm is bolstered by the placement of the Laurentian School of Architecture in the downtown core. All that’s needed is support from council to make the project a priority. Council was expected to prioritize items in the master plan near the end of August.

In the meantime, thanks to some funding from the Northern Ontario Heritage Corp., the DVDC is going ahead with a new, multi-media marketing campaign that includes improving its website. On it, investors can find an inventory of available properties in the downtown core. The DVDC acts as a mediator, referring any inquiries back to the property owners.

The organization is also teaming up with Downtown Sudbury, the Greater Sudbury Development Corp. and the private sector to establish protocols and priorities for downtown development. By determining what types of businesses the downtown wants to attract and the appropriate places for them to go, Sudbury can have a functioning downtown, Thompson said.

Though the work has been long and often challenging, with Sudbury on the cusp of a mining boom, and the architecture school arriving next year, she’s optimistic that the downtown will soon finally get its due.

“In 10 years, we’ve seen positive changes; the momentum is building,” she said. “I think we’re just about at the tipping point, and if we make the right decisions and we’re successful in implementing and prioritizing these projects, they’ll be game changers. They’ll totally transform the downtown and that’s what we need.”