When it comes to internet service providers playing the field in southern Ontario, “it's not just the big boys anymore.” At least, that's what Vianet's director of business development, Brian McCullagh, thinks.
Feb 25, 2016 3:01 PM By: Ella Myers 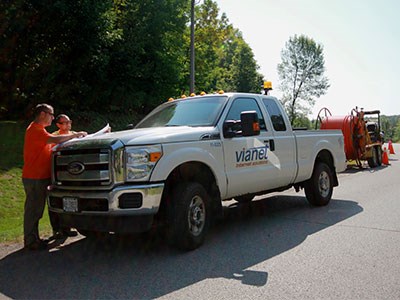 When it comes to internet service providers playing the field in southern Ontario, “it's not just the big boys anymore.”

At least, that's what Vianet's director of business development, Brian McCullagh, thinks. The Sudbury-based telecommunications company is aggressively expanding into southern Ontario, and bringing a mindset shaped by servicing Northern rural communities with them.

Their most recent project involves bringing fibre to the home (FTTH) service to a Whitchurch-Stouffville neighbourhood, in southern Ontario's York region.

A million-dollar estate in a beautifully forested, semi-rural area may sound idyllic, but how idyllic is it when you can't get internet fast enough to stream Netflix? Or, if you manage to get quality internet, it costs you upwards of $600 a month? That's the situation residents of the newly developed neighbourhood found themselves in, in 2013.

“People were using hubs and sticks, so the download and upload of information was extremely expensive,” said Whitchurch-Stouffville councillor Ken Ferdinands. They were too close to existing towers to qualify for federal, rural broadband funding, but that funding didn't take into account the natural environment that made the properties so appealing in the first place.

Larger companies like Bell offered some solutions, but they were rejected by residents as too cost prohibitive, who despite their dissatisfaction with the state of things were reluctant to invest in an entirely new technology.

Vianet happened to acquire the southern Ontario wireless internet service provider Zing Networks right around the time Ferdinands was trying to find an internet solution for his constituents, and he found they were more open to negotiation than their competitors.

“We've built a line from Vaughn to Barrie,” said Vianet’s Luke Gasteiger, director of network engineering. “We wanted to branch out to small pockets of homes that can't get anything.”

After negotiations with the councillor and residents, Vianet agreed to install the FTTH if they fulfilled a threshold of homes to sign up to each pay a $2,500 initial cost to cover approximately half of the project cost. Ferdinands enlisted the help of eager residents, like Michael Cleverdon, to advocate for installation of FTTH in the neighbourhood.

“It appears that now that we have about 200 houses being connected, I think that the math associated with the investment is starting to make more sense,” said Ferdinands. “Even though this was a new business model that they were embracing, it could ultimately make financial sense.”

Now, after well over the threshold signed on, there are over 200 completed in the first stage, and another 70 will be wired in the second. Construction started last August and wraps up by the end of this spring.

Cleverdon was especially interested in seeing the project go through, since he needs the internet for more than just streaming.

“I'm in the printing business so I move a lot of graphic files. So for me to upload a graphic file that used to take a few minutes, it's a few seconds,” said Cleverdon. “It's allowing me to do things I couldn't do before, I have a dedicated IP address. It’s night and day compared to what the service was before. There are many small business owners in the area working from home – one guy couldn't move in.”

Ferdinands and Cleverdon were also motivated by the value FTTH would add to the estate subdivision homes.

“One neighbour had just moved in and they had no idea we had no internet,” said Cleverdon. “You ask about natural gas and everything else but you don't ask about internet, you just assume. This will make a huge difference to resale values.”

McCullagh says he sees more projects in the south over the next several months.

“People from around that area have been coming to us and saying, ‘Me next, me next,’” said McCullagh. But it won't be just residential service they provide, industrial parks in Barrie have shown interest.

All of this work isn't at the expense of their hometown service though. Over the past couple years, Vianet has expanded service to industrial parks in Sudbury, fibred up half of Parry Sound, and has projects on the go in Sault Ste. Marie and Timmins.

“Our big focuses right now are our southern Ontario footprint, and building out fibre around Sudbury and Parry Sound,” said Gasteiger. “We're working to build quality fibre and wireless networks for rural and smaller urban areas don't have quality service.”