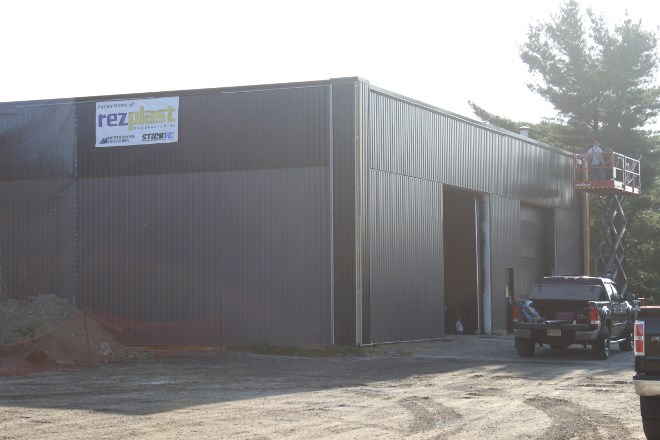 Rezplast Manufacturing has expanded into a 29,000-square-foot space in the South End of Sudbury, doubling its space. (Lindsay Kelly photo)

Rezplast Manufacturing is on the move.

Growth and expansion have spurred the need for more space, and so the Sudbury manufacturer, which has been in business for 27 years, is moving into the third location in its history.

“As we’re growing and expanding our operations, we needed to find a suitable location,” said Sandro Spadafora, Rezplast’s vice-president of operations.

Specializing in the design and manufacture of products from advanced composite materials, such as fibreglass and plastic, the company has been a key player in the Northern Ontario mining industry, but offers services across industries.

With a limited stockpile of industrial commercial buildings available in Sudbury, the company searched widely before settling on a 29,000-square-foot building, strategically located in the city’s south end and just minutes from the Highway 69 bypass.

Since acquiring the property, Rezplast has undertaken extensive interior and exterior renovations at the site, which had been neglected for some time before the acquisition.

On the outside, the company pulled out old fencing and trees, regraded the property, and added all new cladding, windows and doors.

On the inside, the entire building was insulated, new lighting systems were added, along with new power systems, controls and offices.

“We figured we’d spend some time and put some pride and ownership into the building, fix it all up,” Spadafora said. “It’s not just cosmetic; it’s a little bit of everything.”

One of the biggest upgrades is a new spray booth, acquired from the U.S., to enable epoxy coatings and painting, with built-in atmospheric controls to help flow fresh air through and reduce the amount of dust and particulate being churned up.

Spadafora said, once operational, the booth will allow Rezplast to cut its emissions by more than half, lessening its overall carbon footprint.

“So we don’t have to worry about our emissions; it’s state-of-the-art from an environmental perspective,” Spadafora said. “It’s really good for the guys’ health and safety.”

Stick Fix, which Spadafora said Rezplast acquired four years ago, is optimally located near the city’s Countryside Arena, which hosts twin ice pads for hockey games and skating events. Northshore Docks, in which Rezplast became an investor this year, will benefit from its close proximity to the highway and the ability to deliver to customers quickly and efficiently, he said.

With more space, Spadafora said he expects Rezplast to be more operationally efficient. But the company is so busy, they’ll likely have to hire new staff to keep up with demand.

They’ll also be adding new products to their current lineup.

“Once we’re into the new building we have some immediate new offerings that are going to come to the table,” he said. “So that’ll also open the door to work with more customers that we don’t deal with right now, which will be really nice.”

Spadafora said filling customers’ orders is the current priority, and the changeover to the new location will happen slowly, as time permits.

As the summer season winds down, he anticipates Northshore Docks will move over by the end of August, and estimated Stick Fix will be in place at the new site by early fall, just in time for the start of hockey season.

A hard shutdown at Rezplast will likely occur at the start of September, and the business will be fully up and running in its new space by early October.