After soaking up some tasty craft beers during a trip to Montreal, some connoisseurs might bring home samples; some might even try to replicate the experience by firing up their own home brewery. But not Shawn Mailloux.
Sep 9, 2013 3:03 PM By: Lindsay Kelly 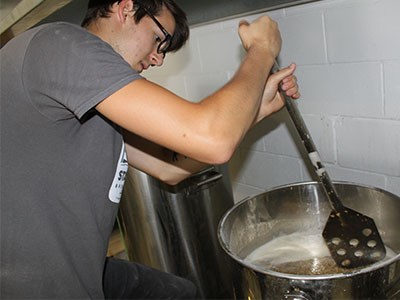 Assistant brewer Simon Jongsma stirs a vat of beer at Stack Brewing in Sudbury. The recipes used by the brewery are those its brewers have employed at home, only adapted to a larger scale. All the ingredients are natural, and Stack does not include purees, adjuncts or essences in its unfiltered brews.

After soaking up some tasty craft beers during a trip to Montreal, some connoisseurs might bring home samples; some might even try to replicate the experience by firing up their own home brewery. But not Shawn Mailloux.

Instead, the Sudbury teacher went a step further and invested his own capital into Stack Brewing, a new nanobrewery located in the Nickel City’s west end.

“I thought I would miss it when I got back to Sudbury,” said Mailloux during a recent tour of his shop. “Then a light bulb went off: why don’t I start this myself in Sudbury to share it with other people?”

Since the spring launch, the people of Sudbury have been thanking him for that insight, routinely buying out the 117-litre batches of Valley Girl, Angry Moose, Black Rock, Saturday Night and Les Portes de l’Enfer.

The names—quirky references to Sudbury culture— and the unique 32-ounce Boston round bottles and 64-ounce growler jugs in which they’re packaged, are easily a big part of the beers’ charm. Mailloux has also employed a novel approach to advertising, relying on social media sites like Facebook and Twitter to spread the word about his brews.

Within 10 minutes after announcing via his Twitter account the approval of his licence from the Alcohol and Gaming Commission of Ontario (AGCO), there was a lineup outside his door with thirsty patrons eager to stock up on Stack.

Mailloux advertises limited store hours on his Facebook page, regularly selling out of stock in just over an hour.

“It’s kind of like a double-edged sword, because I end up turning people away, which is not good business,” Mailloux said. “It would be nice to cater to everyone, but I’m just not making enough beer to do that and have regular hours to plan their schedules around getting the local beer.”

But as the brewers (Mailloux employs three) start to find their stride, distribution hiccups are being smoothed over, and Mailloux hopes to develop some regular retail hours.

He also plans to address the beer shortage by next year, with an investment into new equipment that will allow for brewing 15 times what he’s producing now for a total of 1,500 litres.

He’ll introduce a canning line—the current packaging doesn’t meet industry standards—to prepare for the eventual sale in The Beer Store and the LCBO. Mailloux plans to take a sabbatical during the first semester of the school year to help facilitate the changes.

LCBO sales of craft beers increased 45 per cent in 2012, and that number seems poised to rise. In response, the province announced this summer it’s renewing the Ontario Microbrewery Strategy, which assists craft brewers, with $1.2 million in annual funding from 2014-2016.

Mailloux believes Sudbury, formerly home to Northern Breweries, is ready for its own brew again.

“Even though we’re a Molson Canadian/Coors Light kind of town, there’s still that need for what I’m doing, so I didn’t do a whole lot of market research,” he said. “It just seemed like so good of an opportunity and idea it should work.”

Trusting the advice of his brewers, and his own taste buds, Mailloux said he chose to release beers he enjoys drinking. Valley Girl, a wheat ale, was inspired by his favourite easy-drinking, summer beers, while Black Rock, a Cascadian IPA, is also a favourite, and “there aren’t a lot around,” Mailloux said.

Mailloux said the recipes used are those his brewers have already tried at home, just employed on a larger scale. The nonfiltered brews are made with natural ingredients, without any adjuncts, purées or essences.

Mailloux and his two brewers, Michael Guillemette and Simon Jongsma, can often be found at the cutting board chopping ingredients, while massive vats bubble in the background.

“Usually, it’s just sitting around drinking beer, talking about beer, and saying, ‘Hey, let’s try this recipe,’” Mailloux said. “A lot of it is trial and error, and hopefully they turn out.”