Discovering a business’s competitive advantage, global marketing, export education, expanding market access: they’re the goals of the Sudbury Area Mining Supply and Services Association (SAMSSA), but they could easily be the founding principles of th
Jan 30, 2013 3:49 PM By: Lindsay Kelly 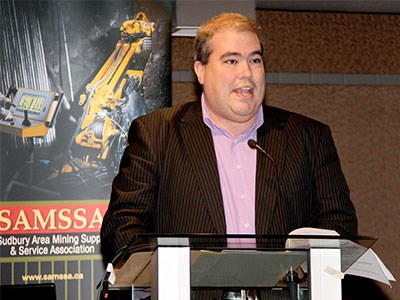 Laurentian University president Dominic Giroux believes SAMSSA and the new Goodman School of Mines are equally important to the prosperity and future growth of the North’s mining cluster.

Discovering a business’s competitive advantage, global marketing, export education, expanding market access: they’re the goals of the Sudbury Area Mining Supply and Services Association (SAMSSA), but they could easily be the founding principles of the Goodman School of Mines at Laurentian University, according to its president.

Dominic Giroux was the guest speaker at SAMSSA’s annual general meeting Dec. 4, and he outlined the scope and aims of the new mining school, which was announced last year and is expected to get underway in 2013.

According to industry statistics, 40 per cent of mining-industry workers are expected to retire over the next few years, leaving a deficit of 60,000 to 100,000 workers across the country. Laurentian aims to close that gap by offering education in mining-related programs that will bolster Northern Ontario’s existing mining cluster and boost the number of skilled workers in Canada.

Canvassing SAMSSA members, Laurentian found business owners appreciated the technical skills of engineering and earth sciences grads, of which there is a current demand, but they also voiced a need for executive programs in the areas of project management, business acumen, and international business.

The mining school will address this need by creating new programs that cut across traditional disciplines, Giroux said.

“Essentially, what the Goodman School of Mines will do is not only look at the needs of our undergraduate students that are here for three, four or five years, it’s really looking at the needs of those employees for the next 40 years,” Giroux said.

What the school won’t do is delve into research, since there are already several facilities in the city that excel at that, Giroux said. The Goodman School of Mines’ sole focus will be education.

“The distinctive feature of our students is that many of them come from mining families—their father, uncle or brother has worked in the mines,” Giroux said. “And when we talk to industry, nationally and internationally, we say we’re not training mining grads to go work on Bay Street—some of them do and are very successful—but really our focus is to meet the needs of industry.”

Giroux credits Dick DeStefano, SAMSSA’s executive director, with planting the idea for the school of mines four years ago. As the pair sat down for a drink, DeStefano challenged Giroux, who was only six months into his role as president at the time, to increase Laurentian’s participation in the min­ing cluster.

“For crying out loud, I’ve got a record deficit,” Giroux answered. “Give me a year or two to settle the place, secure the school of architecture and then we’ll get talking.”

But the idea stuck, and since then, Giroux has secured a significant endowment from Dundee Corp. CEO Ned Goodman and the Goodman family foundation, Jodamada. The exact amount of the endowment remains private—a condition of the donation—but Giroux said the school will kick off with $1 million from the endowment’s payout, in addition to a $500,000 commitment from Laurentian.

Giroux said Goodman has thrown his support behind the school because of the mining cluster’s track record of success. The myriad on-campus resources at Laurentian, including the Ministry of Northern Development and Mines, the Ontario Geological Survey, MIRARCO, CEMI, MERC and the Vale Living with Lakes Centre, can only contribute to the school’s success, he added.

As the school moves forward, Giroux said it will focus on five areas, including introducing new minors and majors, developing executive programs, networking with mining schools around the world, doubling enrolment in mining-related programs while continuing to increase the average entry grade, and improving the university experience of students in earth sciences and engineering.

Support is already coming in for the mining school and Giroux said additional financial investments will be announced in the coming weeks. The school’s founding executive director, who hadn’t been announced at the time of publication, will be soliciting input from businesses regarding their educational requirements.

“Mining is material to Laurentian’s future the same way that SAMSSA and the cluster here are material to the economic prosperity of Sudbury,” Giroux said.