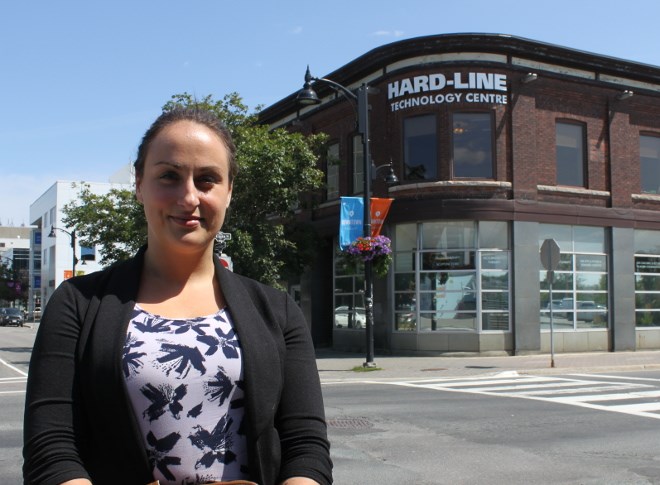 With a few finishing touches to go, Hard-Line is just about ready to raise the curtain on its brand-new technology centre in downtown Sudbury.

As demand continues to grow for Hard-Line’s array of tele-operation and remote-controlled vehicles, its Dowling facility, located about a 30-minute drive northwest of Sudbury, is bursting at the seams, and room for its 120 employees is at a premium.

Felicia Brunelle, Hard-Line’s vice-president of business development, said an expansion had been in the planning for some time and, after a few years of searching, the company purchased the building at the corner of Elgin and Cedar streets a little under a year ago.

“Downtown is growing, and the downtown core is becoming something more exciting to be a part of,” Brunelle said.

“They’ve done a lot of work around this neighbourhood to build things up and it’s absolutely working, so we’re really excited to be a part of it.”

The city, its partners and private enterprise have taken impressive measures to transform the downtown into a contemporary hotspot, situating the McEwen School of Architecture in amongst student housing, trendy eateries and popular entertainment venues, all in an effort to attract a younger demographic of residents to the area.

Brunelle said that strategy is in line with the company’s aim of recruiting young, tech-savvy professionals to its team, to help develop Hard-Line’s next generation of mining vehicles.

“We’re looking for gamers, we’re looking for computer scientists, mathematicians, and, largely, what our team in the Dowling office has told us, is being in a central location is important,” Brunelle said. “They want to be able to ride their bikes to work; there are restaurants downtown; the university is across the street from us.”

Being situated in the downtown core will give Hard-Line an opportunity to showcase all that Sudbury has to offer, Brunelle said, and, potentially, entice talented tech specialists who might be looking for a slower-paced, more affordable way of life than that offered in other tech hubs like Toronto or Vancouver.

When it opens in early September, Hard-Line’s entire technology division will move downtown, creating a centre for all the company’s research and software development. A dozen staff members currently are included under the division, but Brunelle estimates that number will double within the next year.

“We definitely have the work,” Brunelle said. “We just don’t have the space.”

At the new location, some existing tenants – such as La Fromagerie, one of the aforementioned trendy eateries – will remain. But Hard-Line staff will spread across three floors with flexible areas to accommodate different tasks, Brunelle said.

Depending on the project employees may be contributing as part of different teams or may need a different room configuration.

To accommodate that, the centre will have open concept areas, ideal for collaboration, and moveable walls to adjust the size of workspaces. Standup desks are available for those looking to stretch their legs, and there will be a small gym in the lower level. Lounge areas with couches and comfortable chairs will be set up for people who like a more casual environment, and quiet rooms will be accessible for those who need a muted area to concentrate.

“It should be a really fun and productive space to work in,” Brunelle said. “I think it’ll be really dynamic.”

Hard-Line will also have some of its tele-op chairs on site. Used in simulations and testing, they’ll also allow the company’s tech support team to reach out to clients who need assistance, she noted.

As the mining industry transitions from a strictly industrial sector to one focused on innovation and technology, Sudbury is growing its reputation as a tech hub for mining, Brunelle said. And Hard-Line is in full support of helping to grow that sector.

“We’ve always been really passionate about our involvement in the community and our involvement with Sudbury,” Brunelle said. “That’s where our roots are; this is where we started; it’s where we continue to be. We’re really excited to be at the centre of it all.”