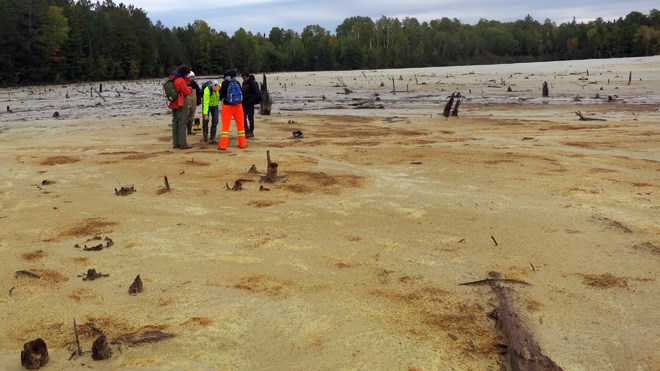 The long awaited cleanup of the toxins left behind by a gold mine – and now leaching into Long Lake – could begin this year. (Supplied)

Barring more objections from area residents, the long-awaited cleanup of the toxins leaching into Long Lake in Sudbury's south end could begin this year.

Nickel Belt MPP France Gélinas said March 29 the province may start the work late in the summer, depending on whether there are more objections to the proposal.

“This situation is a matter of great concern to the residents of Nickel Belt,” Gélinas said in a release. “Long Lake is now listed as a provincial contaminated site and the government has been planning the rehabilitation of the site, and remediation of the mine tailings, for the past several years.”

The Canadian Exploration Company mined, milled and smelted gold from the deposit from 1909 to 1916. In 1910, it produced 1,373 ounces of gold – the largest producer in Ontario at the time. In production intermittently from 1908 to 1939, mining operations discharged about 200,000 tonnes of mine tailings directly to the environment.

The tailings, which contain acidic minerals and arsenic, have eroded and are leaching into wetlands, creeks and lakes, including Long Lake in the South End of Sudbury. In 2012, it was discovered that arsenic levels in the lake exceed the province's water quality objective for arsenic.

To address the issue, in 2017 the province announced plans to divert the toxic runoff into a new containment facility to be built on site, in hopes of capturing most of the arsenic and restoring the lake's water quality.

The process would take about two years, but objections filed in September of that year halted the process. Residents didn't like the fact heavy trucks would be hauling aggregate into the area to upgrade the road and build the facility, and requested a more intensive environmental assessment. It's a similar process that delayed the construction of Second Avenue for three years.

In a recent letter to Gélinas, Greg Rickford, the minister of energy and Northern development and mines, said a new proposal that aims to reduce the impact on the area is nearing completion.

“Once a preferred approach is selected, the public will have another opportunity to review and comment on the revised environmental assessment,” Rickford wrote.

If more objections are filed, he said the timeline for the project will change again. Otherwise, work could begin this year.

“It is (the ministry's) intention to begin remediation work at the Long Lake gold mine site as soon as possible following the final approval of the revised environmental assessment,” Rickford wrote.

“I have been in communication with the ministers asking for action on this dangerous situation,” Gélinas said in her release. “In his response, (Rickford) confirmed that the cleanup could, finally, begin this summer and continue into the autumn of 2022.”

First-of-its-kind machine brings robotics to copper refining
Aug 5, 2020 2:00 PM
Comments
We welcome your feedback and encourage you to share your thoughts. We ask that you be respectful of others and their points of view, refrain from personal attacks and stay on topic. To learn about our commenting policies and how we moderate, please read our Community Guidelines.