The arrival of Finnish immigrants in Sudbury in the early 1900s has left a rich legacy of entrepreneurialism in the city—one that’s chronicled in a new book published by the Finnish-Canadian Historical Society of Sudbury.
0
Jun 10, 2013 6:40 PM By: Lindsay Kelly 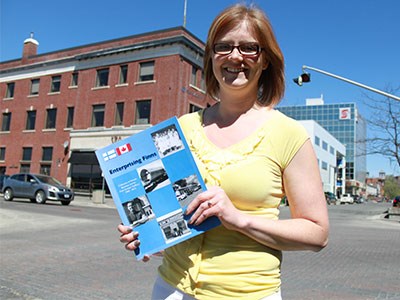 Mandy Kinnonen holds up a new book, Enterprising Finns, recently published by the Finnish-Canadian Historical Society of Sudbury. Kinnonen worked on the design for the project.

The arrival of Finnish immigrants in Sudbury in the early 1900s has left a rich legacy of entrepreneurialism in the city—one that’s chronicled in a new book published by the Finnish-Canadian Historical Society of Sudbury.

Enterprising Finns: Collection of Business Stories from Greater Sudbury 1900-2013 is a 172-page anthology of stories, photographs and other archival material detailing 246 businesses that have been owned and operated by residents of Finnish origin.

“It’s really a small collection,” said Kinnonen, who is of Finnish origin and whose own venture, along with those of her father and uncle, is featured.

“There’s a list at the back of the book of 395 names of businesses we don’t have anything about to put in the book,” she said. “It’s an ongoing life project.”

Niemiaho started compiling stories, photographs, business cards, family histories and any snippets of information he could find in 2003. His collection filled a large binder, which eventually evolved into the book.

Enterprises of all design are featured. From carpenters and construction workers to sauna renters to jewellers and tailors, Finnish entrepreneurs impacted all areas of the Sudbury business scene. While many business owners are gone, and their shingles have long since been taken down, others remain highly visible and successful.

“You wouldn’t recognize all the names as Finlanders, because some of them might have gotten married and changed their name, or someone’s mother might have been Finnish,” Kinnonen said.

Featured entrepreneurs include Brian Ramakko, of Ramakko’s, whose bait and tackle shop grew into a 9,000-square-foot outdoor sports centre operating on Regent Street, as well as Ron and Eric Kanerva of The Shop Harley Davidson, who have expanded their business twice since its inception in 1978.

Anderson Farm in Lively, which was founded by the Anderson family in 1914, produced milk for the area until 1958 and is now a popular museum and tourist attraction. The city also carries a lasting tribute to early Finnish entrepreneurs in the street signs that bear their names, particularly in the south end of the city, Kinnonen said.

While the book recounts a large sampling of Sudbury’s Finnish business heritage, the society recognizes there are gaps in the history, and it plans to publish future, updated editions. People who want to submit new archival material are encouraged to visit the society’s website at www.fchssudbury.com.

Enterprising Finns debuted in early May at the historical society’s annual Mayfair, being held at Finlandia Village. Copies of the book are $20 each and are available at Leinala’s Bakery and the Finlandia Village Store.