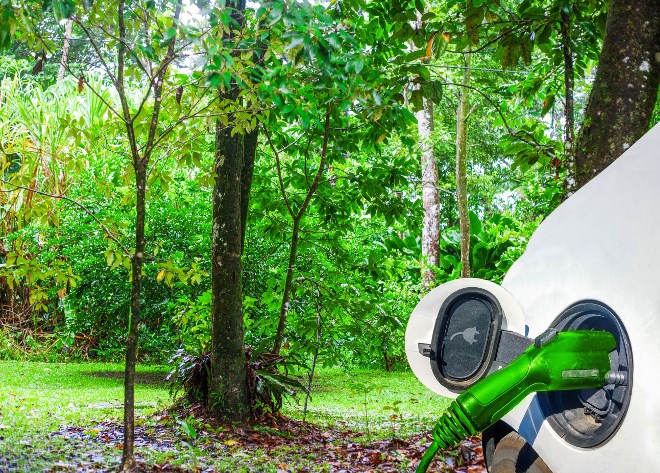 Heliene Inc. of Sault Ste. Maris is working on a number of applied research projects, including a solar-powered charger for battery-electric cars. (Stock photo)

Since its launch in 2010, Heliene Inc.’s bread and butter has been the manufacture of solar photovoltaic modules for commercial and residential power generation. But behind the scenes, the Sault Ste. Marie company’s applied research is adapting the technology to help grow vegetables, power cars, and even generate energy from space.

Sales of Heliene’s solar panels are still going strong, particularly outside Canada, where 98 per cent of its product is sold, said president Martin Pochtaruk, who launched the company following a 20-year career in the steel industry.

But he views diversification as the key to long-term stability.

“We dedicate a good amount of time and resources to applied research, whether it is to improve our processes, or to find other applications for the product,” Pochtaruk said.

Of the applied research projects currently underway, the one furthest along in development is a greenhouse that’s been refurbished to use adapted solar panel technology to help grow crops faster.

Installed at an existing Whitby greenhouse owned by Freeman Herbs, the solar panels help filter the light coming into the growing facility, converting it to electricity that is then used to power the greenhouse.

The technology was developed last winter as part of a year-long pilot project, and researchers at Niagara College are acting as third-party monitors to track the efficacy of the technology.

“Greenhouses do use power and pay a lot of money for electricity,” Pochtaruk said. “So this new product offsets the power requirements and, therefore, the carbon footprint of greenhouses.”

Much like the issue of food security, eco-friendly transportation is looming large in the North. That’s why Heliene is also working on a solar-powered battery-electric vehicle charger.

“Electric vehicles are going to eventually replace, completely, internal combustion vehicles,” Pochtaruk theorized. “It’s not going to be overnight, but it’s slowly happening. So how do we insert ourselves into the business by powering those vehicles with solar energy and not with energy that comes from the coal plant down the street?”

The federal government saw potential in the research, awarding the company a $707,250 repayable FedNor loan in September to further the work.

Pochtaruk said Heliene is putting the funds toward electrical design research and sussing out the potential for pilot projects, much like the greenhouse trial, to develop a show-and-tell piece that demonstrates what the technology could do.

In regions with more advanced electric-vehicle industries, such as cities like San Francisco or entire countries, like Norway, a large percentage of their fleets have already been replaced with battery-electric vehicles, he noted.

But one question remains: who will control the battery-charging market – the utilities or the gas companies?

“It’s an industry that still has to develop,” Pochtaruk said. “Basically, what we’re looking for is to get some pilot projects on the go to try it out, to prove the technology, and to get the development funding for the technology.”

Some of Heliene’s projects have already reached commercial status. For example, an unnamed American company is purchasing specially modified solar panels for satellites being sent to space.

With space-based solar power (SBSP), satellites equipped with adapted panels collect solar power in space, which is then redistributed to earth.

Pochtaruk said the product was developed over several months and Heliene has struck a long-term contract with the purchaser.

Though 2019 is looking to be a good year for solar panel array sales – by his count, Heliene should sell 600,000 – most of Canada remains behind the rest of the world when it comes to the adoption of solar technology.

Both Alberta and Nova Scotia have aggressive plans to decommission coal, leaving those provinces looking to renewables to make up the difference, Pochtaruk noted.

But in the rest of the country, power is relatively abundant and cheap, and so there isn’t enough incentive for most Canadians to adopt the technology.

In Ontario, for example, residents are paying roughly CDN13 cents per kilowatt-hour (kWh) for power, while Californians are paying USD27 cents/kWh.

That makes adopting renewables a more pressing issue for Californians than it does their Canadian counterparts.

“Their electricity costs are higher, so for them to pay off the cost of a solar system, it’s paid off faster, and they also have more hours of light,” Pochtaruk said.