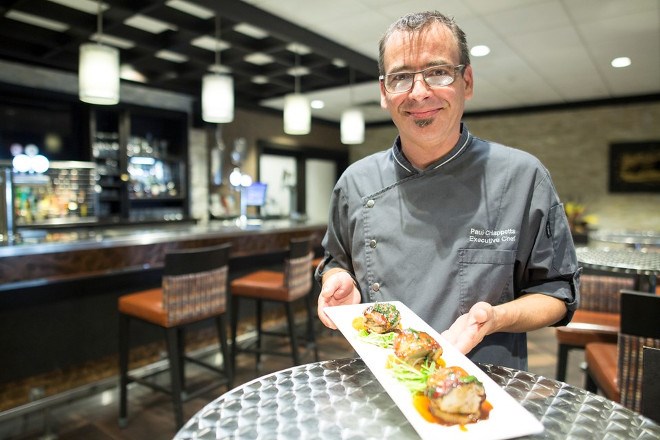 Paul Chiappetta, executive chef at Quattro Vinotecca in the Sault, shows a sample of pork tenderloin and in-house smoked bacon.

A Sault Ste. Marie restaurant is taking the concept of farm-to-table food so seriously, it’s decided to raise its own livestock, without antibiotics or steroids, and grow produce without genetically modified organisms (GMOs).

Paul Chiappetta, executive chef at Quattro Vinotecca, says the move to producing their own meat will give them total control of their supply chain and result in a higher quality product for their customers.

As far as he knows, Quattro is the only local restaurant going to these lengths to supply their livestock and produce. “There are other [restaurants doing this] in Ontario and it’s big in Europe,” Chiapetta said.

“This is how it’s done [in Europe]; normally the farm is out the back door of the kitchen.”

Quattro Farms is built on about 160 acres of farmland near Thessalon and began taking on livestock in May.

To begin, the farm has been raising pigs, chickens and rabbits.

The pigs are allowed to roam free on the land, have toys to play with and access to fallen apples from the trees that line one side of their fenced-in area.

“They are free to spend their days not in a pen, which helps in the flavour of the meat, the production of fat and their overall happiness, which translates into a better product — more tender, more juicy and better flavour,” said Chiappetta.

All of the meat that will supply the restaurant is being slaughtered at the Birch Lake Abattoir in Massey.

“This was a way to have total control — from the time they are born until the minute they are slaughtered,” said Chiappetta.

The farm itself is owned by Mark Petingalo and has been mostly dormant for over 40 years.

Petingalo was considering selling the farm before he was approached by the chef and the owners of Quattro last January.

Their idea of farming without GMOs and antibiotics appealed to Petingalo and the farmer has signed a 10-year agreement to raise the meat for the restaurant.

Next spring, the farm will begin growing produce for the restaurant — including lettuces, tomatoes, peppers, sprouts, cucumbers and melons — along with non-GMO feed for the animals.