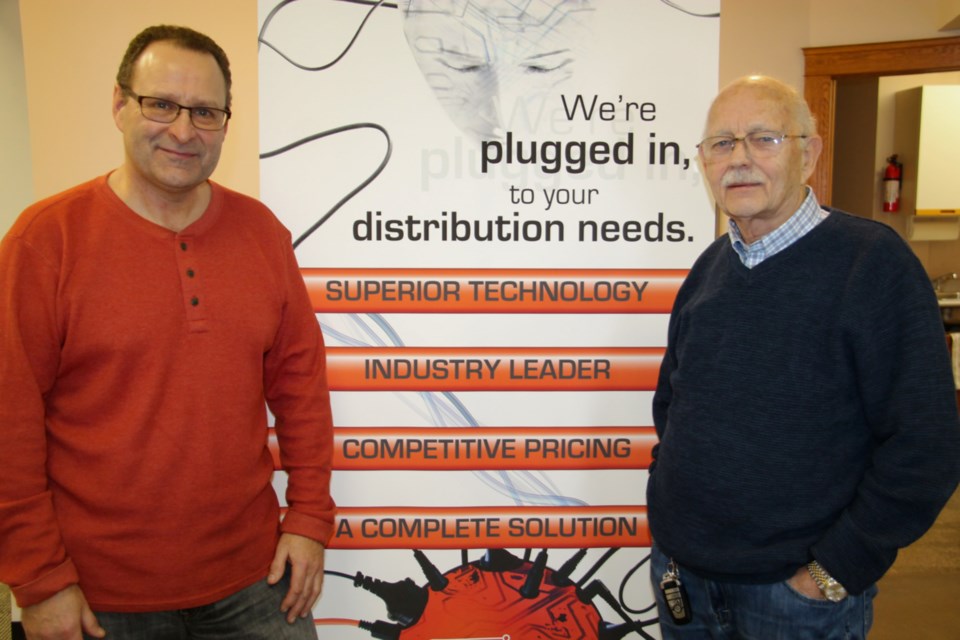 From an office in the Sault’s Industrial Park Crescent, Terry Kelly presides over Systems Solutions (SSI), a locally owned and operated business solutions firm he runs with two business partners.

The company, which sells business management software to independently owned office supply businesses, could be described as an under-the-radar success story, which can trace its roots to the lumber industry north of the Sault in the 1970s.

Kelly, who hails from the Sault and grew up in the west end of the city, graduated from St. Mary’s College and went to work in the accounting department for Tessier Massicotte & Partners, which later became BDO Canada.

Kelly worked for the firm for six years.

“Back in those days, you could take the chartered accountant course by working at a CA firm and doing it by correspondence,” said Kelly, SSI's founder and CEO.

"I didn’t get my degree, but after six years I went to work for our largest client, which was Dubreuil Brothers."

Kelly worked for 17 years with Dubreuil Brothers Ltd., a logging and lumbering operation in Dubreuilville, 294 kilometres (182 miles) north of Sault Ste. Marie, serving as the company’s chief financial officer (CFO) from 1975 to 1985.

“We had 500 employees. That was not a small company,” he recalled.

Part of Kelly's responsibilities with Dubreuil Brothers was automation in the office, contracting with Gary Dumanski of MD Business Systems in 1985 to install a modern computer system and have specialized software developed for the forestry industry.

MD Business Systems was the mini-computer division of CONTEL, the forerunner of SSI.

“We were leading edge at that point. I had gone as far as I could go with Dubreuil and I saw an opportunity and thought ‘This can be sold to other mills,’ so in 1985 I decided to partner with Gary in MD Business Systems,” Kelly said.

As a result, many independent sawmill companies in the province bought their software.

“When I talk software, it wasn’t a small software piece. It was everything," he said.

"We had automated scaling in the bush with data collectors. We were pioneers of that at Dubreuil, down to managing the sale and transport of the lumber into the States and the exchange rates and all that neat stuff. We did that.

“We worked with mills all over the place.”

“We had quite a few Home Hardware stores...we have a building centre in Windsor the size of Soo Mill.”

In 1990, Kelly branched off on his own, starting up Systems Solutions Ltd., concentrating on selling software to office supply businesses.

From 1994 to 2000, he captured the Canadian market, doing business with 30 clients in 43 locations coast to coast.

SSI currently has 166 clients, 128 of which are independent office products dealers, 90 of them in the U.S.

Eight SSI clients are in the Sault and Algoma district, with others in every province and territory (except Nunavut), in 37 states, with another being the biggest office supply dealer in the Bahamas.

SSI is number one in Canada in providing business management systems for office supply dealers, number three in North America.

There was, at one time, a lot of travelling involved for Kelly as he built his business.

“My wife and I would fly to Vancouver, rent a car and drive to Calgary, doing demos, training existing clients...I used to drive 80,000 kilometres a year just in Ontario, and fly the rest," he said.

“Not anymore. With the internet, we can demo, we can train on the internet...(but) we have some trade shows we travel to.”

“I pinch myself all the time,” said Kelly of his success, quick to give a lot of credit to his team.

“I did not do this alone by any means. I have excellent staff and I’ve got two great business partners,” he emphasized.

“My senior guys have over 20 years of service. To me, it’s gratifying to have these big clients in Phoenix, Los Angeles, spending a lot of money with us, with this little company in Sault Ste. Marie. We have a good reputation and we treat our employees well.”

SSI currently has eight employees in the Sault, three others elsewhere in Canada, and seven in the U.S.

“Sault College and Algoma University have been good to us. A lot of our guys, their graduates, have worked for us,” Kelly said.

“My two business partners are younger and they’re carrying the torch now, but I’m still in the office every day.”

Now in his late '70s, Kelly said he isn’t the type to retire.

“I don’t know what I would do if I retired. I would go nuts,” he laughed.