Driving home from work every day, past the crumbling Northern Breweries complex, Mike Oknianski would muse about Northern Ontario’s rich brewing history, dismayed that nothing was being done to preserve it.
0
Apr 8, 2016 3:20 PM By: Lindsay Kelly 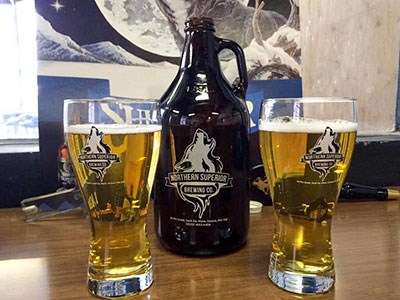 Driving home from work every day, past the crumbling Northern Breweries complex, Mike Oknianski would muse about Northern Ontario’s rich brewing history, dismayed that nothing was being done to preserve it.

Driving home from work every day, past the crumbling Northern Breweries complex, Mike Oknianski would muse about Northern Ontario’s rich brewing history, dismayed that nothing was being done to preserve it.

“I wonder if anybody’s going after the intellectual property rights,” he recalled thinking.

Three years, hours of research, and a financial investment later, Oknianski and partners have launched Northern Superior Brewing Co. out of a 3,200-square-foot space at the Canadian Bushplane Heritage Centre on Sault Ste. Marie’s waterfront.

It’s a working brewery that’s producing a close replica of the Northern Superior Lager of old, while doubling as a heritage site to preserve and display artifacts from the 100-plus years when beer-making was a bustling industry in the North.

In the early 1900s, a number of brewing companies were operating in Northern Ontario — in Sudbury, Sault Ste. Marie, Port Arthur, Fort William, Timmins — until J.J. Doran, who hailed from North Bay, started buying them up, finally consolidating them under the Doran’s Northern Breweries banner in 1960.

Doran’s enjoyed a sales monopoly across Northern Ontario for decades, thanks to the Wartime Alcoholic Beverages Order of 1942, which was enacted by Prime Minister William Lyon Mackenzie King to limit transportation routes so transport could be focused on munitions and supplies for the war effort.

The repealing of the act in the 1970s made way for bigger breweries like Molson and Labatt to enter the Northern market, and Northern Superior Lager’s popularity dwindled. The brewery, which became known simply as Northern Breweries, changed hands several times before finally ceasing production in 2006.

Launched just before Christmas, the new Northern Superior Lager is already being sold in 16 bars and restaurants throughout the Sault, Oknianski said, and that number continues to grow as word spreads of the revival of the homegrown brand that had been revered and consumed for decades.

In setting up the brewery, the partners were steadfast in their desire to use Canadian manufacturers and producers; all the brewing equipment was manufactured and shipped from Victoria, B.C., as are the hops used in brewing.

The malt, meanwhile, is made of Prairie-grown barley that’s been shipped up from southern Ontario. But Oknianski is working on getting it produced closer to home.

“We’ve been in talks with local farmers and we’re trying to get them to grow hops for us,” he said.

Eventually, the brewery plans to introduce seasonal lagers and different ales, and this past winter tested the waters with a tasting of its Northern 55, which was met enthusiastically by beer lovers.

If things continue to go well, the brewery will add to its staff, which currently comprises a Niagara College-trained brewmaster and a part-time retail worker.

Beyond the beer itself is the heritage. Before Riversedge Developments began demolition of the Northern Breweries buildings, Oknianski and crew salvaged a “53-foot trailer load” of artifacts. Previous to that, they bought a storage locker’s worth of brewery-related items from eBay.

They now have rollers from the bottling plant, the original watercolour designs for the bottle labels, building blueprints, photos from staff parties, and more.

“If we don’t grab this,” Oknianski thought at the time, “where’s this history going to go? It’s going to be lost.”