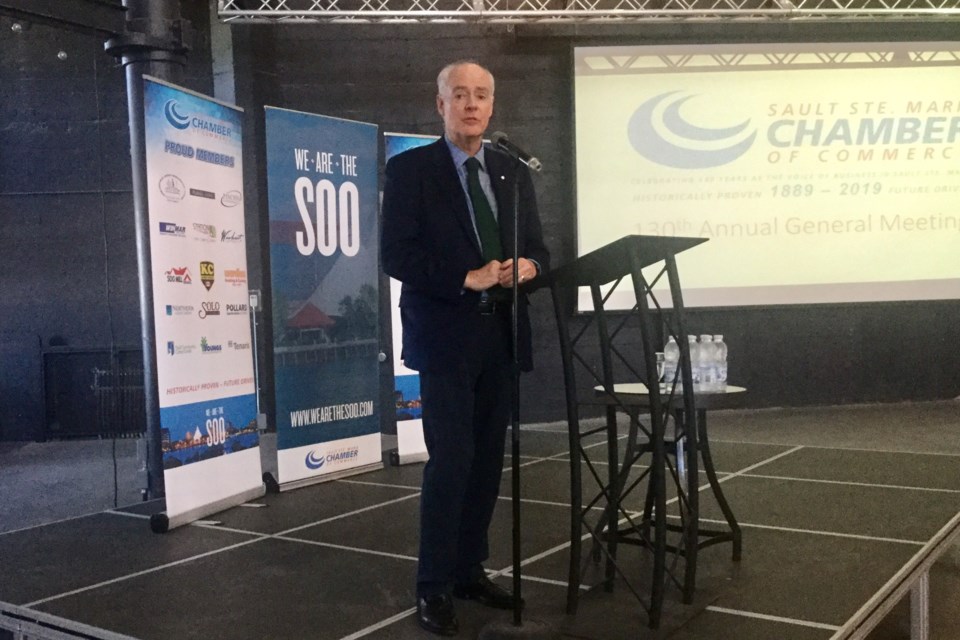 Saultites are suffering because of the tangled web of overlapping government approvals needed for Noront's proposed ferrochrome smelter, a veteran federal politician and business leader told members of the Sault Ste. Marie Chamber of Commerce on Oct. 8.

"I want to be clear: civic engagement is important and communities must have a voice in project development," said Perrin Beatty, president and chief executive officer of the Canadian Chamber of Commerce.

He said Canadians are seriously overregulated.

"Here in the Sault, you're feeling the unfortunate effects of this issue, with the proposed construction of Noront's new ferrochrome processing plant. Before the proposed facility could even begin working on various regional, provincial and federal approvals, some began working outside these processes in an attempt to derail the program," Beatty said.

"We're calling on all parties to commit to a regulatory system that works for everyone, including business. We know that regulation is a central part of our society and that countries with effective, predictable regulatory regimes attract investment."

"Unfortunately, our system doesn't. It's complex. It's unclear and it's unpredictable. The overlapping regulations across different levels of government are stifling investment and preventing us from getting natural resources to global markets."

"It's no surprise that so many of our community- and nation-building projects are stalled. Canada must do better."

"The next federal government must make fixing our system a priority," said Beatty, who became president and chief executive officer of the Canadian Broadcasting Corp. and the Canadian Manufacturers & Exporters before taking up the leadership of the 200,000-member Canadian Chamber of Commerce in 2007.

Beatty was speaking at the Machine Shop to the Sault Ste. Marie Chamber of Commerce's 130th annual general meeting.

He was critical of the performance of federal party leaders during the Oct. 7 debate.

"Last night, as Canadians, we all watched the leaders' debate. While we heard many comments from the leaders criticizing business, we didn't hear even one time from anybody mentioning the word competitiveness."

"As democratic strategist James Carville famously put it during Bill Clinton’s successful 1992 presidential campaign: 'It’s the economy, stupid.' In a time of global uncertainty and rapid technological market change, the economy should be a serious debate about how to tackle the current and future challenges that face Canadians."

"Just as we noticed last night, if you read all of the election platforms and promises released so far, and look for words like competitiveness and productivity, their scarcity is astonishing."

Beatty talked about what he termed the Seven Burdens of Business:

"Where are the proposals for nimble and flexible approaches to regulating new technologies that make businesses more productive?"

"Where are the ideas about how Canada can capitalize on the increasing value of intellectual property in the digital economy?"

"Where are the strategies to ensure Canada’s natural resources, agriculture and agri-food sectors can meet the increasing global demand for Canadian products?"

"Where are the plans to simplify Canada’s complex and inefficient tax systems that diminish investment in our country?"