An independent film maker with Parry Sound roots found cottage country to be a wellspring of inspiration.
May 29, 2009 1:46 PM By: Ian Ross 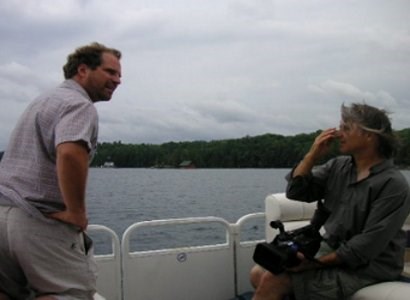 An independent film maker with Parry Sound roots found cottage country to be a wellspring of inspiration.

Ben Sainsbury would like to produce the Holmes on Homes version of cottage renovations as part of the offerings of his two production companies, Red Mountain Films and Cottage Country TV.

Documenting the stories of classic family cabins of 'Old Muskoka' before they're crowded out by the heated driveways of the weekend mega-mansions is of creative interest to the 36-year writer-director who grew up on Lake Joseph, south of Parry Sound.

Last year, while filming a pilot for TV on a reconstruction job of a neighbour's cabin took on a dramatic twist.

What started out as a straight-forward cottage renovation production by a local couple – Peter and Mary Herbert – abruptly turned into a dramatic short film when the wife suddenly died of cancer last year.

The storyline of the family tension and emotion of tearing down and rebuilding a classic cabin that had been there for generations was only ratcheted up.

Sainsbury considered canceling the project, not wanting to exploit the family's grief, but the husband thought it would make a great momento to weave the footage of his wife into a story about family.

"It's kind of haunting to have that now that she's passed away," said Sainsbury.

He'll edit the 10-12 minute short film this year at his cottage studio on Lake Joe and hopefully sell it to the Bravo Channel or distribute it on the independent film festival circuit.

Born in Toronto, Sainsbury's family to moved to Puerto Rico where his father, Doug, now a Seguin township councillor, ran a business for eight years. Ben spent his high school years in nearby Rosseau and most of his summers at the family cottage on Lake Joe.

His passion for film, led him to California and Arizona for 16 years where he studied acting and earned a bachelors degree in film making and a masters in professional writing at the prestigious University of Southern California film school.

He acted in commercials for Toyota and Lee Jeans which paid for his film projects and put him school.

Among his producing and writing credits include Jail Bait, an independent short dramatic film starring Peter Dinklage, an award-winning indy film star who's gone on to TV roles.

Sainsbury, who holds dual Canadian-U.S. citizenship, also did a three-year stint in the U.S. Army in a Psychological Operations unit where learned to use media on deceit and confuse an enemy.

Though he was lucky to avoid the U.S. invasion and occupation of Iraq, that conflict remains in his mind.

The torture and prisoner abuse committed by U.S. military interrogators at the infamous Abu Ghraib prision in Iraq provided the spark behind a new animated short, Private Snuffy, he was editing this spring.

"The film is a psychological poem on why I'm glad I didn't go to Iraq."

Sainsbury admits making film is a tough "feast or famine" business and it's competitive to land financing in Canada.

Though he obtained an $8,200 grant from the Northern Ontario Heritage Fund to finish the cottage project, and relies on National Film Board funding, he has to sell software on the side in Toronto to make a living.

"The money I get from various sources goes right into the project with no salary."

His Los Angeles experiences with the big film studios were exciting times, but independent films hold a greater lure.

"I'd rather do my own thing rather than collect a studio pay cheque and be uninspired."

There's a bigger audience than ever for independent documentaries and it's cheaper to shoot with high-definition equipment than in the traditional film formats used in the 1990's.

"Now everyone can shoot something in broadcast quality."

One of the collaborators he relies on is camera man Harald Bachmann, who helped shoot the cottage project. He's a 30-year veteran of the independent film and Reality TV productions, and one of the handful of contractors he'll employ for shoots.

Some of the productions he wants to delve into include full-length documentary films telling personal stories.

While working on his PhD on media studies in Switzerland, he wrote some articles on his military service for an online Italian magazine, the Peace Reporter, and would like to continue writing on those experiences.

"I'm interested in getting the truth out there and getting away from the propaganda, having studied it, been around it, and seeing how people can have blinders on. I have an interest in trying to be a truth revealer of some kind."