Forestry icon Frank Dottori is getting into the lumber business by reopening a former Domtar sawmill in White River.
Jun 21, 2013 3:29 PM By: Ian Ross 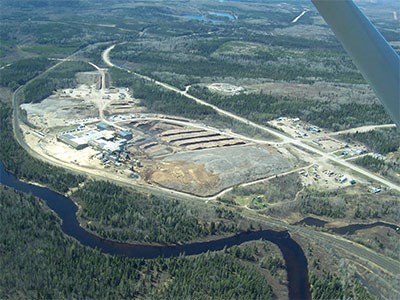 Former Tembec boss Frank Dottori is leading an ownership team that plans to fire up a White River sawmill with a $15-million capital improvement plan.

Forestry icon Frank Dottori is getting into the lumber business by reopening a former Domtar sawmill in White River.

Under the banner of White River Forest Products, the operation will be a stud and random-length mill that company officials hope to start up with one shift in the fall.

“We’re saying by Oct. 1 we should be up and running,” said Dottori, the founder of forestry giant Tembec, who’s part of an ownership group in a three-way partnership of private investors (53 per cent), Pic Mobert First Nation (23.5 per cent) and the Township of White River (23.5 per cent).

Dottori, who holds 49.8 per cent of the private ownership piece, expects to be a hands-on boss for the operation valued between $20 million and $25 million.

Since retiring from Tembec in 2006, Dottori set up his own consulting company and used his 34 years of forest industry experience to dive into the renewable energy field, particularly ethanol.

He's been serving on many industry-related associations and is chairman of CRIBE (Centre for Research and Innovation of the Bio-Economy) and AV Terrace Bay, part of the Canadian operation for the Aditya Birla Group of India.

Two years ago, the White River mill was slated to be converted into a bio-jet fuel plant when Rentech, a California biofuels company, came calling amidst much government fanfare which supported the project with a generous Crown wood supply.

But Rentech couldn’t find an economical way to make green jet work in the lab and bolted White River earlier this year to dive into the wood pellet business by buying shuttered mills in Wawa and Atikokan.

“This is a good solid business to get into,” said Dottori. “It's supply and demand and I think people will start wanting new houses and furniture.”

Dottori had hoped to start delivering lumber in July but was stymied by “bureaucratic delays,” namely, getting a safety inspector to review the operation that's been closed for six years in order to get power hooked back up.

Otherwise, the mill's condition is in great shape. “They shut it down as if it was going to restart.”

When Domtar closed the mill in 2007, Pic Mobert and the Township of White River stepped forward to save the mill from the wrecking ball and keep the mill's forest licence intact, said Jaehrling.

Dottori’s group signed an agreement in principle in January and closed the deal March 1.

Dottori said that will allow them to produce 150-million board feet of lumber annually and between 100,000 and 110,000 tonnes of chips by next year.

With 40 to 50 employees aboard, many of them former Domtar employees, Dottori said that's enough to start one shift while on their way to creating 90 mill jobs.

The company is planning to invest $15 million to modernize the mill over the next 15 months, including installing a high-speed saw line to replace an existing one.

During the Domtar days, Jaehrling said few Pic Mobert residents worked at the mill, but now the First Nation has worked out a deal for its members to harvest roughly half of the mill's annual cut.

“We’re looking to maximize our benefits out of the project.”

Undoubtedly area contractors stand to benefit, including Pic Mobert's own White Lake Resources Corporation, a contract labour company which once serviced the forest industry and has transitioned into mining services and hydro-electric construction.

“We’ve been contributing as much as we can to support the company,” said Jaehrling. “We’re not looking for benefits; we’re owners.”

This summer, a crew from Pic Mobert has been involved in the mill's cleanup, maintenance and repair of the buildings and equipment. Band staff from the community has been seconded to coordinate a training program and set up the company's office.

“It’s very exciting now,” said Jaehrling. “There are people and equipment moving around in the mill, the flag is flying and there was a lineup of vehicles going into security today. It's really nice to see things coming alive and bringing a boost to both communities.”

“This is a good solid partnership,” said Dottori. “One of best things for the development and self-sufficiency of First Nations is for them to become operators. The best way for them to control their own destiny is to start taking real ownership and participate.”

Jaehrling said it's been a real challenge over the years for Pic Mobert, White River, and their consultant, the late Jeff Butler, to find the right forestry partner to restart the mill.

“Frank is a phenomenal leader. We’re just so blessed. I mean he's the guy, right?