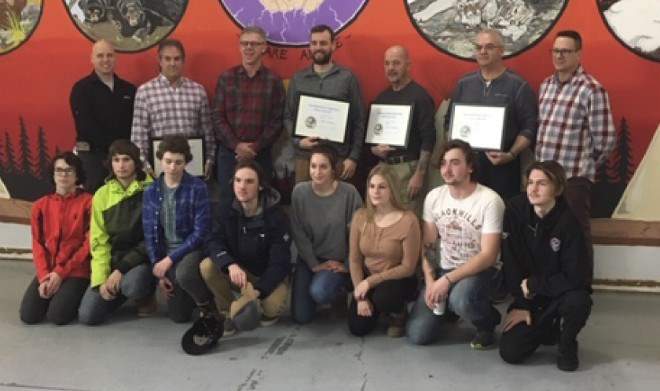 A new mentorship and training program in Kapuskasing is helping increase the success of high school students testing for their welding certification. (Supplied photo)

A new training and mentorship program in Kapuskasing is preparing high school students for careers as welders in an effort to fill a need in the industry and retain youth in the community.

Developed over the last two years, the initiative brings together partners from education, industry and the community to enhance the welding classes already available at Kapuskasing District High School (KDHS).

“There’s this thirst to learn with the kids when you do hands-on with them,” said Parent, quality manager at Cloutier’s Machine Shop. “It’s not abstract anymore; it’s not pretend.”

Through the initiative, experienced welders go into the school to provide training on quality assurance measures in welding – students learn how to read design plans, understand weld symbols, identify and resolve weld faults, and more.

That mentorship and enhanced training is designed to give students a greater chance of testing successfully for their Canadian Welding Bureau (CWB) tickets in both the metal-cored arc welding (MCAW) and shielded metal-arc welding (SMAW) methods.

Even in its nascent state, the program is already showing benefits. Students light up when they realize they can become competent at a skill that will lead to a career, Parent said. Last year, one of the female high school students qualified for two tickets – the first time locally a female had qualified.

“It’s amazing when you look at how willing they are to learn and to apply immediately what they learn,” Parent said. “And once they get it, it’s amazing to see that reaction in their eyes: ‘I can do this and I can do it now. I don’t need to wait until I’m older.’”

Planning for the initiative began two years ago when John Longstreet, a certified inspector with CWB who frequently tests Kapuskasing students, approached Parent about finding ways to increase the students’ success rates.

“Otherwise, it was touch-and-go if they would pass,” Parent said.

As a person of First Nations heritage who’s long worked within the Indigenous community, and in the welding industry, Parent set to work contacting key partners she thought would get involved. She was buoyed by the response.

Cloutier’s has committed to training and mentorship, as well as offering students co-op placements at its shop, while Rayonier Advanced Materials donated $4,600 worth of equipment to the initiative. Rayonier also accepts co-op students at its shop.

Parent targeted the Indigenous community in particular, as she said she sees many Indigenous youth who “financially, emotionally or even culturally” have difficulty transitioning to postsecondary education.

Training and testing in welding allows any student to stay at home, close to their support systems, while still developing a useful skill that they can build on.

That helps companies in the industry address the ongoing problem of finding skilled tradespeople.

“Both Rayonier and us here at Cloutier’s Machine Shop, we see what the lack of welders, machinists and millwrights does to our companies,” she said. “So it was a way for us to be proactive within the industry; it was a win-win.”

KDHS is the only accredited facility in Kapuskasing that can offer CWB testing for students – the next closest location is three hours away in Kirkland Lake, Parent said. So now the partners are looking at expanding the program to accommodate more participants.

Discussions are underway with the Métis Nation of Ontario, which has expressed an interest in recruiting area women of Métis descent into the program, and Parent is eager to establish partnerships with Kapuskasing’s other high school, the local adult learning centre, and Collège Boréal.

“We want all the youth of our region to benefit from this,” she said.

First, though, the partners have to ensure they can handle a higher volume of participants. Discussions around building more capacity began in January, but Parent is wary about growing too quickly and fizzling out prematurely.

For her and the existing partners, the pledge to train and support as many new welders who want to learn is a long-term commitment.

“We're going to be backing up the high school for a long period of time,” Parent said. “This is not a short-term goal for us, because we do know that as we move forward that demand for manpower is just going to keep increasing.”