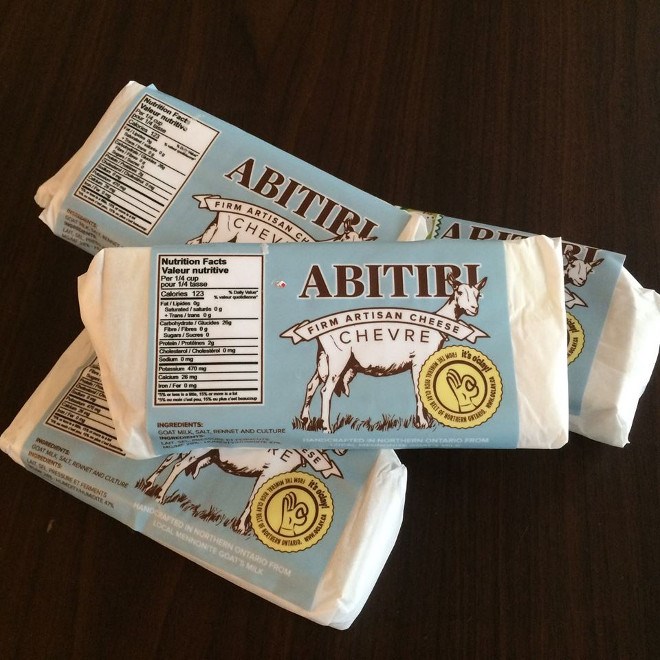 Abitbi Chèvre, an artisanal goat’s milk cheese, is the first product to be released under the O’Clay brand, which is an initiative of Abitbi Commons in Iroquois Falls. (Photo supplied)

“We buy Mennonite goat's milk from this area – Val Gagné in particular – and then it's sent to Kapuskasing to be transformed into cheese,” said Shelley Jessup, administrative manager for Abitibi Commons, who describes it as a wholesome, high-quality cheese.

To start, the cheese already has two distributors – Seguin’s Valu-Mart in Iroquois Falls and Pick of the Crop grocery store in Timmins – and the response from consumers has been positive.

“At the Valu-Mart in Iroquois Falls, it’s been selling very, very well,” Jessup said. “People are very pleased with the product.”

Abitibi Commons was established as a partnership between the community of Iroquois Falls and Riversedge Developments after the closure of the former Resolute Forest Products paper mill in 2014.

Riversedge purchased the property promising to work with the community on a redevelopment effort with the goal of spurring economic development.

To date, a farmers market has taken up residence on the site, and Jessup said the introduction of the O’Clay brand is the next step in the initiative.

The idea is to work with local producers to develop a number of new opportunities for production all under the O’Clay brand, and Abitibi Chèvre is just the first product being introduced.

Next up is a potato-processing plant, which will be installed in one of the still-standing structures on the former Resolute property, said Jessup, who noted there is also warehouse room for storage and loading bays ideal for transporting goods.

The operation will source potatoes from local Mennonite farmers, and other producers who are interested in participating, and potatoes will be washed, graded, and bagged at the facility.

“It’s one of the first in this region, and we’re looking at starting at a smaller capacity, say, 25 acres, and growing it to 100 acres within a couple of years,” Jessup said.

“And then, next year, as in 2019, we’d look at more root vegetables, such as onions and carrots and that type of thing, and expansion of the potatoes,” Jessup said.

As the project is in its infancy, O’Clay hasn’t been actively seeking out producers, but eventually there will be training available for those who are interested in becoming involved in the project.

In addition to helping restart the agriculture industry in the region, the initiative is also expected to fulfill a growing demand for locally produced products, a goal Gilbert Seguin hopes to help further along through his store.

“We are pleased to be the first outlet for our customers to acquire Abitibi Chèvre cheese,” said Seguin, owner of Seguin’s Valu-Mart, in a release.

“Our objective is to provide assistance in bringing local food to the community through our store.”

Jessup said O’Clay will target distribution mostly in Ontario and possibly Québec. A number of customers have already expressed interest in selling the potatoes.

She also expects a number of jobs to be created through the initiative, including an operations manager, seasonal workers to wash and grade the potatoes, farmers, and drivers to transport the goods.

Enhancing agriculture in the area is in line with a key tenet of Iroquois Falls’ strategic plan released last June, and also helps fulfill the mandate of the Growth Plan for Northern Ontario, the province’s Local Food Act, and goals outlined by the Ontario Ministry of Food, Agriculture and Rural Affairs, Jessup noted.

Mattawa truck manufacturer amongst nation’s top growing companies
Sep 28, 2020 11:21 AM
Comments
We welcome your feedback and encourage you to share your thoughts. We ask that you be respectful of others and their points of view, refrain from personal attacks and stay on topic. To learn about our commenting policies and how we moderate, please read our Community Guidelines.