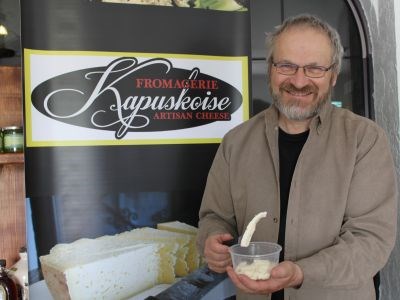 Denis Nadeau samples fromage en grain (cheese curds) from Fromagerie Kapuskoise in Kapuskasing, where his son, François, has been making artisanal cheeses for the last year.

In 2011, while travelling in China, François Nadeau was dismayed to realize he couldn’t find cheese — an uncommon delicacy in Asia — anywhere. It was then that he decided he would learn how to make his own so he would never have to do without it.

Five years later, Nadeau is the proprietor and head cheesemaker at Fromagerie Kapuskoise, where he and a small team of helpers are crafting artisanal cheese that rivals the quality and provenance of similar French-made products.

“They work by hand, in a very artisanal way, and it’s aired like it was done traditionally in France,” explained Denis Nadeau, François’ father and the sales and marketing director of the Kapuskasing-based cheese factory.

“When you age cheese, the easiest way is to just seal it in plastic, or put paraffin on it.”

But at Fromagerie Kapuskoise, the cheese is air aged, in a temperature-controlled room specially designed for the purpose, with only salt periodically rubbed on the cheese wheels to help create a crust and seal in the flavour.

Housed in a Spanish-style former private home, the cheese factory has been operational for only a year, but already cheese connoisseurs are travelling from across the North to taste one of the Fromagerie’s four varieties, named for towns and landmarks in the Kapuskasing area — Mattagami, Kapuskois, Opasatika, and Missinaïbi — along with the fromage en grain (or cheese curds).

After undertaking some initial training in Québec, François travelled to France, where he spent close to a year in the French Alps region learning the art of cheesemaking.

The key to the flavour, Nadeau said, is that the Fromagerie uses only one source of milk, while more industrial cheeses, like the standard bricked fare one finds in grocery stores, are made using multiple sources of milk.

Kapuskasing’s colder temperatures make the vegetation richer, Nadeau said, and as a result, the cows’ milk has a higher protein content, which makes a richer, more flavourful cheese.

Primarily, the Fromagerie sells its cheeses at locations along the stretch of North extending between Kapuskasing and Smooth Rock Falls, but it has debuted at more southern locales.

At the Cheese Boutique in Toronto, proprietor Afrim Pristine, who’s recognized as one of only 50 master cheesemakers in the world, predicted the Mattagami, if aged longer, could become the best cheese in Canada.

Nadeau was only mildly surprised by the endorsement of his son: following his training in France, François was so passionate about the craft, he had been asked to stay on as a teacher and cheesemaker.

“He’s good by French standards, and the French are the standards of cheesemaking,” Nadeau said.

But his heart and his family are in the North, and so he determined to return and set up shop.

The family believes there is a large, untapped market for artisanal cheese just waiting to open up in the North. Denis envisions a series of cheese factories dotted across Northern Ontario, creating a destination where foodies and cheese lovers can indulge their tastebuds by exploring Northern regional cheesemaking.

But stringent guidelines and prohibitive operational costs that are geared to serve industrial cheesemaking make it difficult for their artisanal counterparts, like François, to get started.

“(The government) imposes rules that are not functional, not necessary, very costly, and we see that as hindering the practice,” Denis said. “So we’ve been putting pressure on the ministry level, saying, why don’t we find the best practices that exist in the places that really want this type of industry.”

He compares it to Ontario’s early wine industry, which churned out bland varieties until the province introduced the Vintners Quality Alliance (VQA) program in the late 1980s.

The program raised the standards of wine production, vintners rose to the challenge, and today Ontario’s quality wines contend amongst the world’s finest.

Denis advocates for a similar “cheesemaking revolution” in Ontario and believes the market is here to support it.

“We came in an area that never had a culture of fine cheese, and people, within a year, they’re discovering that they can’t go back to the other stuff,” he said.

This summer, the Fromagerie is adding to its offerings by creating a new cheese made from sheep’s milk, and in 2017, they’ll do the same with goat’s milk.

In November, the company will showcase its wares at the Royal Winter Agricultural Fair, as part of the Northern Ontario Pavilion, in Toronto.