Mines could go nuclear in less than 10 years 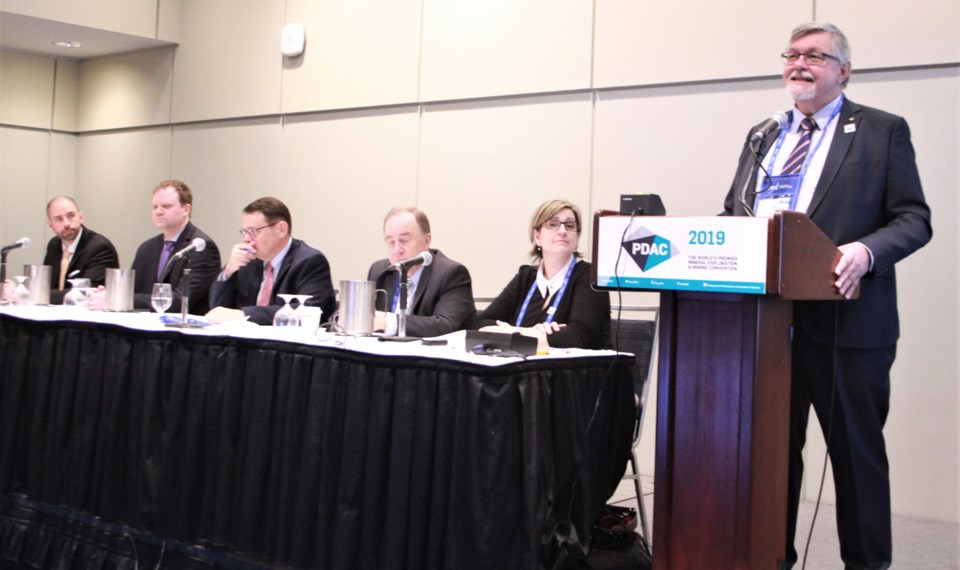 A panel of experts from the nuclear and mining sectors discussed and fielded questions on progress being made on bringing small modular reactors to the mining industry to provide a reliable source of energy. (Karen McKinley photo)

Nuclear power is grabbing the attention of the mining industry, to the point where there is a real possibility there could be portable reactors powering mines in less than 10 years.

That was the news delivered at a first-of-its-kind panel discussion at the Prospectors and Developers Association's (PDAC) annual convention, in Toronto on March 3.

Organizer Glenn Mason, a policy advisor with Natural Resources Canada, said the country is in a very good position to capitalize on growing interest in nuclear technology. It is in the nation's best interest to seize the opportunity to shape SMR technology with the mining industry.

“Or, we can wait and buy an SMR off the shelf designed to fit the competitor's needs,” he said. “We could be trailing game-changing innovation.”

He stressed that actions taken by the country in the next 12 months to two years could determine the country's future of this technology.

Pakalnis said there are around 35 designs being considered by the federal government of varying power levels and sizes, ranging from a few kilowatts and the size of a stage podium, to something that could fit into two or three transport containers and generate power uninterrupted for up to 20 years.

Either way, all of them have to be transportable, self-contained and autonomous.

“Canada is already known for their CANDU reactors, which are quite large and deemed among the safest nuclear reactors in the world,” Pakalnis said. “This will build on that reputation, but this time the designs will be smaller and the power output much lighter.”

Ontario already gets 60 per cent of its power from nuclear generation, and Canada is deemed one of the cleanest mining jurisdictions in the world, he added.

The reason for mines wanting SMRs is the ongoing issue with providing reliable and safe power to mine sites. Currently, that is provided largely by diesel fuel and electricity, if a mine site is close enough to a transmission line. Both have their issues with storage, consistent power output and price.

The average price to use diesel fuel is around 32 cents a kilowatt hour. An SMR could get that down to around 20 to 30 per cent less the cost of diesel. Pakalnis said several nuclear vendors have already told Mirarco they can “absolutely” beat the cost of diesel.

Another bonus is these reactors will be completely self-contained. All reactors generate heat from the uranium, but most large nuclear power plants release that in open water tanks. Saunders explained the overall design would involve a reactor inside a pressurized vessel which would bring the temperature of the water inside to around 300 degrees Fahrenheit, with the steam driving turbines to generate power.

The power usage for a specific mine could be determined by contractors and the reactor would be run by a separate entity. Pakalnis said the average Northern mine needs around 20 megawatts of power.

McDaniel said Canadian Nuclear Laboratories was given a mandate in 2016 to deploy a reactor in 10 years, and they are on track to meet that goal. The organization launched a citing process and had six applications. One has moved on to start negotiations with the government, while two others have advanced to prepare to start discussions with the federal government.

All the organizations are already actively talking to the mining industry players.

The vision is to have something that can be loaded onto a transport truck, or a few trucks, brought to a site, assembled, and turned on with little effort and maintenance.

Once it has run out of energy or no longer needed, the reactor would be easily transported back to the manufacturer for disassembly or moved to its new location.

Cameron added this is not “science fiction” and pointed out Russia had an SMR on a barge in the North Sea generating power. China and Argentina are building, and the U.S. and China are moving fast.

“If we can bring the two biggest industrial centres together – nuclear and mining – we can have something in the world that is truly unique,” she said.