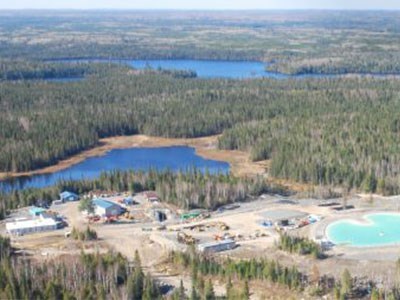 A Toronto mine developer announced it is one step closer to carving out an open-pit gold mine near Gogama in northeastern Ontario.

IAMGOLD Corporation liked what it read in a conceptual preliminary economic assessment (PEA) for its Côté Gold Project and has already moved to the pre-feasibility stage.

The company is crunching the numbers on the viability of digging a pit and building a processing mill at a site five kilometres west of Highway 144.

With upfront capital costs of $1.03 billion and life-of-mine sustaining capital costs estimated at $440 million, the project is pegged to produce an average of 302,000 ounces of gold every year over a 21-year life span. The average grade would be 0.97 grams per tonne.

A thickened tailings management facility is being considered and the mine site would be powered by a 44 kilometre power line to Hydro One's Shining Tree substation.

The company said the pre-feasibility study should be completed by the second quarter of this year.

The pre-feasibility study is designed to validate and provide more detail of the development concept set out in the PEA.

Exploration activities will continue at its more than 500-square-kilometre property surrounding the deposit.

"The Côté Gold Project provides us with an exceptional option for future growth,” said Steve Letwin, IAMGOLD president-CEO, in a Jan. 26 statement. “Since acquiring Côté several years ago we have been focused on de-risking the project. Our drilling program, since IAMGOLD took over the project, has led to a nine-fold increase in the indicated resource to eight million ounces with another one million ounce inferred resource. The positive results of the PEA demonstrate the potential for Côté Gold to be a low-cost, 21-year mine with attractive returns.”

The Côté Lake area has been well known to prospectors since the early 1900s. Various companies and government agencies ran exploration programs in the 1940s and from the early 1970s to 1990. Trelawney Mining and Exploration carried out exploration activities there since 2009 until they were acquired by IAMGOLD in 2012. Since 2010, extensive diamond drilling activities have since been undertaken to delineate the deposit.

IAMGOLD also announced it recently received provincial approval on the project’s environment assessment, which dovetails on getting the federal environmental approval last April.

That clears the way for IAMGOLD to proceed with development permit applications after the pre-feasibility study is done.

"Côté Gold is one of Canada's largest undeveloped gold deposits," added Letwin, "so securing positive decisions on both the federal and provincial environmental assessments for the project is a major regulatory milestone that confirms we can build and operate an environmentally sustainable mine that aligns with our Zero Harm goals. I thank all the many individuals and organizations for participating in these environmental reviews.

"By considering environmental and social impacts early in the mining process, we have been able to plan a mine that will benefit shareholders and Indigenous communities, along with other stakeholders. We will continue to closely engage our Indigenous partner communities and other stakeholders as we move the project forward, and to seek further opportunities for improvement as a responsible miner."