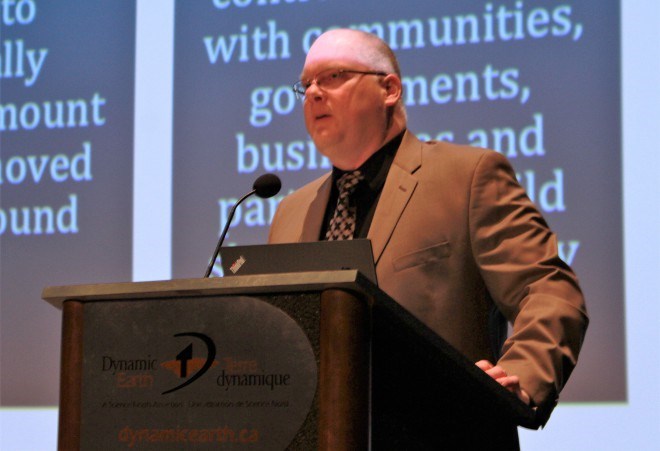 Denis Gratton, vice-president of automation at Barrick Gold, talked about the company's progress in developing their own more ecological methods and tools for mining at the membership meeting for the Sudbury chapter of the Canadian Institute of Mining on April 19.

Barrick Gold isn't alone in their plans to make their mining operations more automated and ecological.

The plans to go green are not a secret, but Denis Gratton, vice-president of automation, spoke at the April 19 meeting of the Sudbury chapter of the Canadian Institute of Mining to elaborate on the company's strategy. Their plans include everything from chemical leaching to autonomous vehicles and artificial intelligence in a ground-up approach to change how the company does business.

For starters, Gratton said the company had to look at innovation as a whole, rather than merely changing a few machines or methods of working. To do that, the company established its own innovation team to work on projects in house and explore third-party partnerships.

“It's not like we hadn't innovated. In the processing of gold, we are proud we have led in that area for many years,” he said. “There are places where we had to create a process, because one didn't exist.”

They had discussions and invited operators to try and identify where the problems are. They came up with five categories: global ore body intelligence, autonomous and electric mine and what can be automated, predict the precision extraction and new methods to recover gold, symbiotic development and sharing the wealth with host communities and countries, and disruptive technologies and value gold in non-traditional ways.

Gratton explained there are three levels of innovation at the company. The first is general improvements to the mine operations, or continuous change.

“We have an exceedingly strong program around this, with monthly global meetings with metrics that are compared with all the mines,” he said. “All the mines are networked, and they share their findings on a regular basis.”

The second is more step change. These include introducing available technology from outside the industry.

The third area Barrick is looking at is artificial intelligence and learning technologies to adjust for better recoveries in real time. Gratton admitted that while it is generating a lot of excitement, the company has to manage its expectations and look at it carefully before jumping in.

“We can't push down that spirit of wanting to do better,” he said. “The challenge for us is how do we manage those expectations. There's this belief that artificial intelligence will solve all our problems, but what does it really mean?”

The topic that generated a lot of interest from the audience was in-situ leaching, where dissolving solutions are pumped into a borehole to extract minerals and salts.

This has been used in uranium and copper mining, Gratton explained, observing it had been done in Elliot Lake in the late 1980s. It did not catch on then, but Barrick is considering it for some projects to get away from using cyanide in the extraction process.

“We don't want to divulge our secrets in types of solutions, but I have to say it is quite interesting what the possibilities are,” Gratton said.

He did talk about a cyanide alternative for a specific kind of ore in one mine at their Goldstrike project in Nevada. They were hoping to apply it to other mines, and although that's not yet the case, they are continuing to work with it to find other opportunities.

Innovations at the company's Hemlo project, 350 kilometres east of Thunder Bay, were touched on.

What is not commonly advertised is the mine has been running autonomous trucks since the late 2000s. And now they are leveraging the knowledge they acquired with that technology to apply it to their other mines.

“There were two, then three, trucks hauling ore between three ore passes, and a dump, with a Grizzly and a rock-breaker at the shaft,” Gratton said. “We are using that data to help us and propel us forward, both in terms of culture and the actual technology.”

One step Barrick applied elsewhere is installing a control centre to monitor operations at their Nevada Camp at Elko, primarily at Goldstrike and Cortez.

“Once we put this in place, we determined we had gaps in our information,” he said. “There's been a campaign to go out and sense the rest of the operations and integrate it into the processes.”

There have been several changes an innovations over the past year. In 2017, Barrick added automated processing, which was a big change since a lot of lever and dial mechanisms were still being used at many of their plants. This helped increase gold recovery. The Cortez mine also received its first tele-remote load, haul, dump machine that works between shifts.

Part of the innovation drive was also prompted by debt. Barrick is working to make its operations more profitable and cost-effective for the entire life of mine.

While Canada has been a global leader in uptake in mining innovation, Gratton said they have been slow in using autonomous vehicles in open pits. He said that is likely to change in the near future as they develop their Nevada projects.

He also took a few moments to talk about the recent passing of the company's founder, Peter Munk. Gratton said he didn't know Munk personally and only met him briefly a few times, but said he continued to be passionate about the company.

“There was something about him that was part of the DNA of the company. The type of individual that he was, you felt it, whether you knew him personally or not,” he said.

In honouring Munk's legacy, the company is moving forward with more collaboration and innovation. They had always been open to partnerships and working with other companies, but Gratton said in the last two years, he has seen that grow more than in his entire 25-year career with Barrick.

“This is something we know at Barrick he would've wanted, because by nature, that's how he was,” he said.