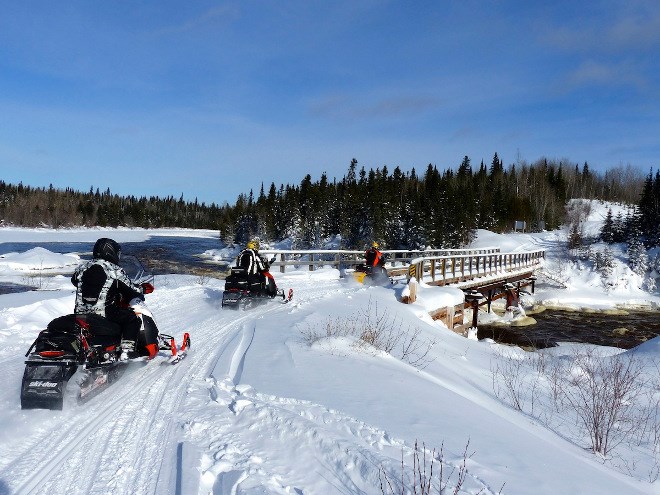 The Northeast Community Network is rolling out a plan to market the Highway 11 corridor as the World’s Best Snowmobiling Destination.

With the new year will come a new approach to winter tourism in the northeast, with the introduction of a destination marketing plan for turning the region into a snowmobiling mecca.

Last spring, the Northeast Community Network (NeCN) announced its intention to develop and market the area along the Highway 11 corridor — stretching from Constance Lake to Temiskaming Shores and including Timmins — into the World’s Best Snowmobiling Destination.

The goal is to identify potential tourism development opportunities to stimulate economic growth in the region.

NeCN sent out a survey to stakeholders this past fall, and hosted a one-day summit in Cochrane on Nov. 3, which gathered stakeholders together for guest lectures, panel debates and roundtable discussions.

Feedback from stakeholders was expected to be presented by project consultant Marla Tremblay on Jan. 10, at which time NeCN would roll out the strategy for its five-year plan.

Sylvie Fontaine, NeCN’s chair and general manager of the Hearst Economic Development Corporation, said the survey provided some great insight into what riders want and what the hospitality industry can do to make the area more appealing.

“The top three factors that influence riders' decisions to return to our community were 90 per cent the trails, 70 per cent accommodation, and 61 per cent restaurants,” Fontaine said.

In addition, of the top three places that riders were most likely to visit during a trip, 97 per cent of respondents said restaurants, 84 per cent said service stations, and 52 per cent said drinking establishments.

“What they did identify was in some areas they need more gas stops, we have to improve on signage, and (we need) more and better warmup shacks and washrooms,” Fontaine added.

At the summit, stakeholders heard from some of the best in the business. Matt Ballard, former executive director of the Hatfield-McCoy Regional Recreation Authority, shared the story of how the West Virginia community turned the area into a renowned destination for ATV and dirtbike enthusiasts.

“Starting with just a few miles of trails, it became very big and now a lot of hotels were built to accommodate the influx of visitors using the trails,” Fontaine said. “So he gave us some ideas on how communities became involved to welcome these visitors.”

Yves Ouellet, from the Québec Federation of Snowmobile Clubs, shared insight into what his province has done to create an industry of high-end restaurants and inns that attract people every year.

There was a representative from the Ontario Federation of Snowmobile Clubs on hand to talk about that club’s strategy, and local tourism industry representatives talked about what they’re already doing to welcome sledders to the region.

The summit was rounded out by a roundtable discussion, with all feedback going to inform the five-year strategy. Fontaine said while some of the ideas will require a financial investment, most of the suggestions made were quite reasonable.

“If you’re looking at renovating the rooms, that’s expensive, and there’s a lot of cost associated with it, but some of the things that were suggested were easily done and deployed in the region,” she said.

For example, one hotelier, at the onset of each snowmobiling season, passes out cue cards to all employees with tips for guests on where the gas stations are located along the trail, distances between points of interest, and where repair and retail shops can be found. All the suggestions will help to create an excellent experience for visitors, Fontaine noted.

And she believes the strategy could have a broader impact beyond the highlighted region.

Since launching the initiative last spring, NeCN has received lots of reaction from other regions in Northern Ontario, which are looking to the NeCN as a model for other communities to emulate.

“This project has really gotten other regions interested,” she said. “The other regions were looking at what was happening and asking a lot of questions.”

The NeCN snowmobile marketing plan is being launched with the assistance of provincial and federal government funds. Following the strategy’s release, Fontaine said the group will likely look at additional funding options to help roll the plan out.