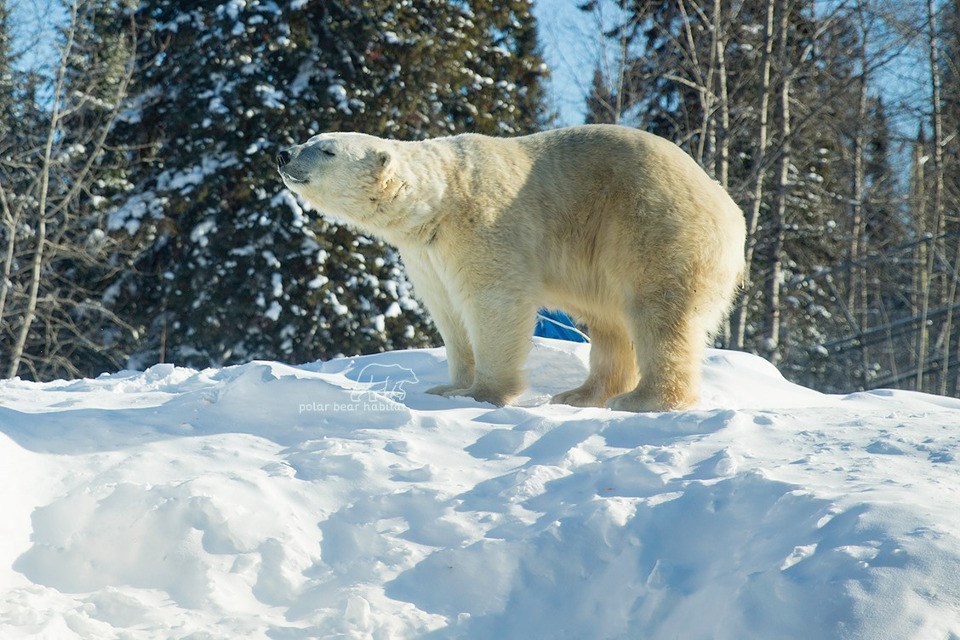 The Canadian Polar Bear Habitat in Cochrane will remain operational for at least another year while its board of directors tries to find additional sources of funding to keep the centre open.

The facility currently houses five polar bears, and it serves as both a research centre and a tourist attraction.

It was in danger of closing permanently after a financial review of the habitat, conducted by town council in November, demonstrated its growing burden on the town of 5,000.

Taxpayers annually fund the centre to the tune of $400,000 – the equivalent to roughly five per cent of an average resident’s tax bill – and in its 15 years of operation, the centre has yet to turn a profit.

The habitat was “born out of a desire to provide a regional tourism ‘product’ that would help provide some diversification of our local economy, through tourism, to offset the unpredictability of the boom-to-bust cycle of our natural resource-based local economy,” the report notes.

“Regardless of what the recommendations have been, they simply have never materialized, despite a healthy dose of wishful thinking – also known as ‘If you build it, they will come.’”

According to the report, the habitat was envisioned by the town’s community development corporation (CDC) to capture some of the tourist traffic travelling on Ontario Northland’s Polar Bear Express train from Cochrane to Moosonee.

But after Ontario Northland discontinued train service between Cochrane and Toronto in 2012, the habitat experienced a “significant reduction in gate receipts,” the report notes. The CDC has since disbanded, and the town took over operation of the facility.

Most of the current tourist traffic is considered “accidental” in nature – visitors who are in town for other reasons and tour the habitat as an afterthought.

Feedback from hoteliers indicates few of their guests stay for visits to the polar bear habitat, the report notes; in fact, the bulk of their clientele comes to the Cochrane area for its snowmobile trails.

In November, after releasing its report, council publicly floated the notion of closing the habitat permanently, holding a pair of open houses to allow members of the public to share their opinions.

Council received overwhelming response from individuals and organizations in favour of keeping the habitat open, including wildlife protection group Zoocheck, and researchers at the University of Toronto and York University.

Through the recommendations of a consultant, HR&A Advisors Inc., the board is now attempting to rebrand the facility as a research centre and sanctuary. But that will require hundreds of thousands of dollars in capital upgrades and wage increases.

During a Dec. 10 council debate on the merits of continuing to fund the enterprise, Mayor Denis Clement noted the difficulty of the decision facing the town, which takes a lot of pride in being the home of an internationally renowned polar bear habitat and research centre.

“Personally, I do believe that we need to give the board of directors time to put together a business plan; then we will work together with them,” he said.

“I'm committed to knock on every provincial door and any federal door, wherever possible, to help out the board and community to be successful.”

The decision was not unanimous, however. Coun. Daniel Belisle deemed continuation of support for the habitat as fiscally irresponsible.

Among his concerns, he cited a lack of support from provincial and federal governments for operational funds for tourist facilities, which would leave Cochrane as the sole funding source.

Already operating at a $5-million deficit, and with future repairs and upgrades estimated in the millions, Belisle believes the polar bear habitat has run its course.

"In all good consciousness, I can’t support this facility; I think it should be mothballed," Belisle said.

"Return the bears to owners so they can feed them. When the board can come up with $500,000 in bona fide corporate funding from sponsors, then I would be in favour of the Town of Cochrane contributing to this worthwhile sanctuary or habitat. But until we have cash in our hands, why should the taxpayers be funding a dead horse."

Under the current plan, approved on Dec. 10, council will gradually transfer operational control over to the board of directors, which will have until December 2020 to come up with a viable business plan, including funding sources to keep the facility running.

If, in a year from now, the board can’t demonstrate sustainability of the habitat, council said it would re-examine its options, including shutting down the facility permanently.