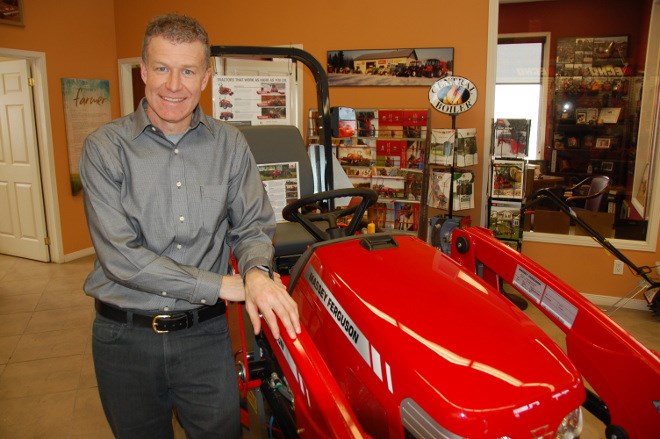 Brian Brownlee, CEO of Brownlee Equipment in Earlton, has been consistently ranked as one of Canada’s Fastest Growing Retail Companies.

One of Canada’s fastest growing companies can sometimes be a mystery to folks in its own backyard.

Brownlee Equipment, a second-generation agriculture and industrial supply company in Earlton, has been on an amazing growth curve in recent years.

The 20-employee dealership was listed last year on the annual Profit 500 list of the fastest-growing retailers in Canada, showing a growth rate in revenue of 111 per cent between 2010 and 2015.

With outlying sales offices in Huntsville and New Liskeard, Brownlee has been consistently shown up in the annual rankings since 2013.

That may be news to locals in the southern half of the Timiskaming region, who aren’t quite familiar with the whereabouts of the dealership despite its highly visible Highway 11 location and a 40-acre property strewn with tractors, combines and backhoes.

“It’s funny,” said company CEO Brian Brownlee, “people in New Liskeard don’t drive north. I coach all of my kids' hockey teams and the parents are saying, ‘Brownlee Equipment, where is that?’ They never go north. The natural tendency here is to go south to Sudbury or North Bay.”

It prompted Brownlee to open the New Liskeard location, just 20 minutes down the highway from the main 6,000-square-foot sales and service shop they opened in 2007.

Established in 1973 by his parents, Ken and Gayle Brownlee, the first shop was a small garage in nearby Charlton.

Ken, a mechanic, did the repairs and sales while Gayle handled the books.

They started with contract work for the forestry mills, servicing trucks and forklifts before shifting into farming equipment, selling tractors and bailers.

Their first Russian-made Belarus tractor was sold in 1974, the year Brian was born.

They’ve since broadened their offerings to include select equipment lines from manufacturers from all over the world.

“Germany, Russia, Czech Republic, Austria…” rhymes off Brian, “and we’ve been to those places because the companies take us there to show their product.”

Together with his brothers Glen and Steven, Brian grew up around the business.

On the contracting side, he bailed hay for farmers and cleaned out forestry mills. The family balanced that work with running their 300-head beef cattle operation.

Having an array of equipment at their disposal bred familiarity with the product, allowing them to give honest advice to customers.

“The customers that buy from us have a lot of confidence that we have the parts on the shelves and we have the shop expertise to fix it because we run into those problems every day,” said Brownlee.

The company is also an active community and corporate sponsor in backing local sports teams, the Bikers Reunion Weekend and the Earlton Steam Show.

“For sure, the secret to the growth is giving back. We donated a $15,000 tractor to the One Foot Forward (fundraiser) that was raffled off. That money stays in the community and for all the kids in sports.”

While not one of the North’s largest equipment dealers, he suspects they’re one of the most diverse in selling and leasing in agricultural, industrial and recreational equipment.

“So we diversified from contracting to more sales to construction equipment and into rentals, which helped our sales a lot because when people rent stuff it can end up being a purchase.”

Their contract work, about 10 per cent of the business, involves snow removal and brush clearing for Ontario Northland and the TransCanada Corporation.

Brownlee projects their 2017 sales revenues to be in the $10-million range but expects it to level off at some point.

He admits they’re receiving the residuals from the growth of agriculture in Temiskaming.

“There’s lots of land clearing going on and lots of people are investing in land,” with many landlocked farmers migrating from southwestern Ontario where farmland is $25,000 an acre to the Claybelt where it’s in the $3,000 or $4,000 an acre range. “That’s given us new customers.”

The impact of climate change has also meant a more diverse crop base for the equipment supplier.

“Fifteen years ago, nobody grew corn up here, soy beans and fava beans. Now we do and we get good yields.”

The company sells and leases equipment to portfolio investors like Area One Farms and big cash crop farmers like Koch and Grant Farms.

But dairy farmers, armed with more quotas and building new barns, are their biggest clientele.

With an eye to the future, Brownlee said they’re working a new project with a government funder that will add four or five new people to the fold.