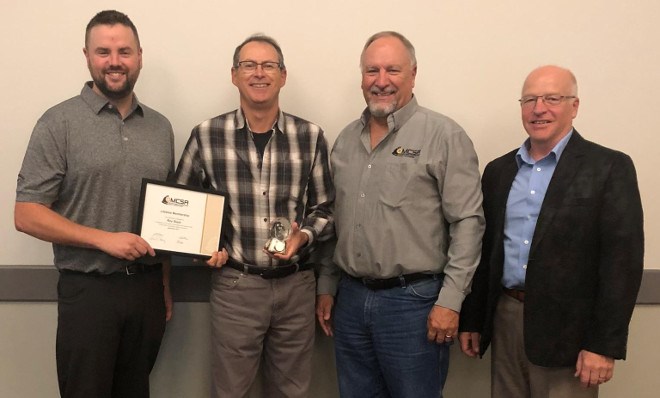 Roy Slack (second from left) has received a Lifetime Membership with Ontario Mine Contractor’s Safety Association. He’s only the 11th person to receive the nod in the association’s history. (Supplied photo)

Roy Slack has been honoured with a Lifetime Membership with Ontario Mine Contractor’s Safety Association (OMCSA), only the 11th person to receive the distinction in the 70-year history of the organization.

Slack, a director and past president of Cementation Americas, spent several years on the board of the OMCSA, sitting on technical advisory committees in an effort to make mine contracting a safer environment.

“Roy Slack is one of the elite in the mining sector. His knowledge, approach and willingness to have a conversation to share his experiences are second to none,” OMCSA chair Dennis Sobey said of Slack.

“His knowledge, approach and willingness to have a conversation to share his experiences are second to none.  Roy has been heavily involved with the OMCSA for many years and we are better because of it.

“When Roy speaks, people stop and listen. We are honoured to welcome Roy as a Lifetime Member of the OMCSA.”

Slack, who is based in North Bay, has been recognized with a number of accolades for his work in the industry.

In 2008, he was awarded the Engineer’s Medal for Entrepreneurship by the Professional Engineers Ontario. In 2009 he was given the Metal Mining Society Award by the Canadian Institute of Mining, and in 2012 he was named a Paul Harris Fellow by Rotary International.

He has been active in numerous safety initiatives and, in 2013, was appointed to the Province of Ontario’s first Prevention Council to advise the government on workplace safety.

Slack began his tenure as the president of the Canadian Institute of Mining Metallurgy and Petroleum (CIM) in month.

In 2018, he was inducted into the Sudbury and Area Mining Supply and Service Association (SAMSSA) Hall of Fame.