Although past attempts to organize hoteliers in North Bay have not always been successful, a new group is making progress. HOST (Hospitality Organization Strengthening Tourism) is working at bringing more people to the city.
0
Oct 25, 2011 3:14 PM By: Liz Cowan 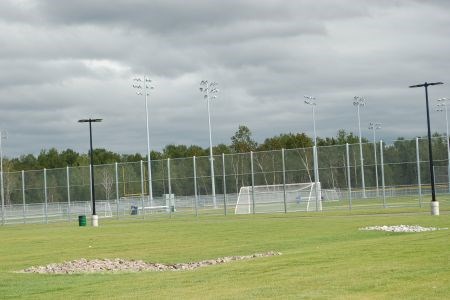 The Steve Omischl Sports Complex that opened in August is a $11.7-million facility that includes three full-sized baseball diamonds and three multi-use fields.

Although past attempts to organize hoteliers in North Bay have not always been successful, a new group is making progress. HOST (Hospitality Organization Strengthening Tourism) is working at bringing more people to the city.

“If we can win events for the city, then we get people here,” said John Crescenzi, general manager of the Best Western on Lakeshore Drive. “If the community is warm and welcoming, people may return for a family vacation and then maybe even see what job opportunities are available here and consider moving to the city.”

Crescenzi said he was surprised when he moved to the community in 2007 to find there was no hotel network.

"I learned there were some challenges," he said, "but I joined the North Bay and District Chamber of Commerce and started talking about breaking down the walls that existed (withing the hotel industry)."

Susan Ray, general manager of Clarion Resort Pinewood Park, agreed that a united group of hotels was needed in the city.

"There was a group that did get together a few years ago, but it did fall apart," she said.

Crescenzi said a call was put out to all the hotels who were chamber members late last year and asked if they would like to get together for a discussion.

"It was amazing how many jumped in right away," he said. "We called it a collaborative network and we basically came together to talk about how we can win more events for the city."

Large events require the support of more than one hotel and Crescenzi said North Bay is an ideal location to attract more. In March, some members met with the city's economic development department to see how they could work together.

"It was very positive and it gave us a chance to see what the city was doing," he said. "There are a lot of things happening and we need to be part of that," he said. "We have some members who are quite keen and want to see us move ahead and that is certainly very optimistic."

This summer, the city and HOST partnered to offer a presentation on the benefits and opportunities of sport tourism with Blair McIntosh, director of games and awards for the Sport Alliance of Ontario. One session included a chance for hoteliers, municipal representatives and sports officials to discuss what they felt were strengths and weaknesses.

“One weakness we identified, when we have a tournament, is that there are others going on at the same time,” Crescenzi said. “That way, we run out of rooms so we need to organize these events properly so people coming in can find better hotel pricing, find restaurants and have better availability of our facilities, like ball fields.”

One of the strengths the city has is its new Steve Omischl Sports Complex that opened in August. The $11.7-million facility includes three full-sized baseball diamonds and three multi-use fields. It is named after the Canadian freestyle skier who was born in North Bay and was a three-time Olympian and four-time World Cup champion. Omischl attended the opening ceremonies.

“This facility is top of the line,” Crescenzi said. “It is going to be a real benefit to the city and will bring in more events to the city.”

North Bay also won its bid to host the World Ringette Championship in December, 2013 which will include teams from the United States and Europe. The game was invented in the city and celebrates its 50th anniversary in 2013.

"That is huge for the city," Crescenzi said. "It is going to put North Bay on the map and there will be international attention."

HOST drafted a letter to the local ringette association to give its support as opposed to hotels doing it individually.

"For all of us to succeed, we have to think creatively in order to get a lot more of these kinds of events to the city," he said. "We have to engage those who have a role in bringing events to the city so they can tell us what they do and what they need and then we know how we can support them.

"When you have more people behind something it just makes it that much easier to make it happen."

Since December, 2010, the group has been meeting monthly. So far it includes all nine branded hotels in North Bay but it is not exclusive to them or just hotels. Restaurants may want to join the group and get involved.

And the focus isn't just on sports tourism, but other events such as conventions and conferences.

"We have good representation and we are working hard at bringing large events into the city," Ray said. "That puts us all on the same page and a group is more powerful than an individual."

Apprenticeship programs to fill North Bay jobs
Feb 3, 2020 5:00 PM
Comments
We welcome your feedback and encourage you to share your thoughts on this story. We ask that you be respectful of others and their points of view, refrain from personal attacks and stay on topic. To learn about our commenting policies and how we moderate, please read our Community Guidelines.