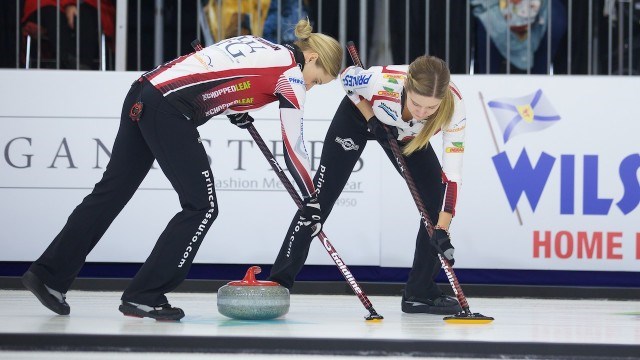 Jocelyn Peterman and Kaitlyn Lawes, who curl for the Jennifer Jones team, will be among those competing at the Pinty’s Grand Slam of Curling Masters tournament Oct. 22-27 in North Bay. (Supplied photo)

North Bay is gearing up to host the Pinty’s Grand Slam of Curling Masters tournament Oct. 22-27.

The city was invited to host the event following the success of the Ford World Women’s Curling Championship, which the city hosted in March, 2018.

When the figures from that event had been tallied, the City of North Bay determined the event had given the city a $7.3-million boost.

In evaluating the economic impact, the Canadian Sport Tourism Alliance looked at how much out-of-town attendees spent while at the event, how much organizers invested to put on the event, and the capital construction costs directly attributed to the event.

For its success in hosting the event, the organizing committee was recognized with a Northern Ontario Business Award in 2018.

In an Oct. 8 news release, organizers of the Masters tournament said tickets for the event are “flying off the shelf,” with more than 27,000 sold as of Oct. 8.

The tournament – the first in a series of six through the season – features the top 15 men’s and women’s teams in the world and includes a dozen rinks from outside of Canada.

Through the season, teams earn points based on their rankings at various Pinty's events, and the top-ranking women’s and men’s teams each receive $75,000 in prize money.

More information about the Pinty’s Grand Slam of Curling is available here.