Don Champagne’s first foray into entrepreneurship almost crash landed before it off the ground.
Oct 7, 2014 6:37 PM By: Ian Ross 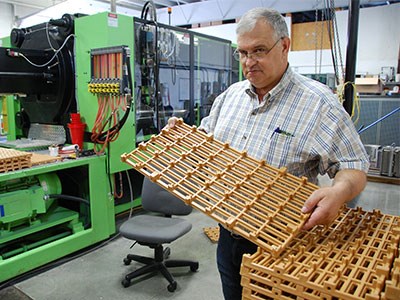 Don Champagne, owner of North Bay Plastic Molders, inspects a stack of shop floor mats produced on one of his six injection molding machines in his Corbeil shop.

Don Champagne’s first foray into entrepreneurship almost crash landed before it off the ground.

After the Corbeil native established North Bay Plastic Molders out of his garage in 1985, the venture almost came to a screeching halt when his first would-be customer hung him out to dry.

A local mining supplier had been importing thread protectors used for exploration drill rods from Australia. The purchasing agent told Champagne if he could produce the caps at a cheaper price and deliver in time, he would get the contract.

Champagne mortgaged his house and borrowed heavily to raise the cash for his first German-made injection molding machine, then submitted his price for the molds and parts.

With no word for a month, he phoned the company only to be told that the job went to a Toronto manufacturer even though Champagne’s quote was cheaper.

As a novice manufacturer, the company had concerns about his reliability and survivability.

“It was really, really difficult to get started and get customers because nobody would trust me,” Champagne remembers. “Nobody knew if we were going to be in business in a year.”

Fortunately, he received a phone call from the competitor of that company who inquired if he could make the thread protectors and design them so they could be pried off in the field without using tools.

Champagne landed that job and has never looked back.

“I should have failed but nobody told me I was supposed to stop,” said Champagne, who runs the three-employee custom and proprietary injection moulding outfit with his wife, Jackie. The shop is located mere steps from the back door of his Corbeil home, just east of North Bay.

Champagne was introduced to the process while working in mechanical maintenance for Ontario Hydro in southern Ontario.

A hunting buddy, who managed a small Toronto injection molding plant, gave him a tour of the facility in 1979.

“When I walked in, the lights were out and all the machines were running, unattended and fully automated.”

It turned on a switch inside Champagne, who left the security of the public sector to bring the technology north. He set up shop close to the farm where he grew up.

“Sometimes you want to do something in your life and you don’t want to wait until you retire.”

“I like German machinery because they’re extremely efficient,” said Champagne, in adding one machine works on the energy of six 100-watt bulbs.

He was attracted to the clean nature of the work, but gaining a foothold wasn’t easy.

He ran into political obstruction from an East Ferris township councillor who wouldn’t permit any kind of industry in the farming-based rural municipality. Champagne fixed that problem by running against the incumbent and beating him out.

Mainly through word of mouth, Champagne has steadily built a diversified international client base making thread protectors and drill hole plugs used in mining and construction, and shipping caps and dust plugs used for pipeline customers.

The company has further branched out with custom injection molding for the electronic and recreational sectors, and in producing pipe fittings and couplers for geothermal companies.

To make inroads into South American mining, he’s hired a Spanish-speaking employee in accounting to help with correspondence.

One of the competitive advantages of his small and nimble firm is being prepared to handle the unexpected. That means handling large orders on short notice.

“The typical order is somebody will order something at 10 a.m. and by 3 o’clock in the afternoon it’s gone.”

Rush jobs are not out of the ordinary.

Last year, a Sudbury company placed an order for 40,000 10-inch bore hole plugs, a job that would normally take three weeks. The customer wanted it within a week.

Champagne’s crew juggled their work schedule and production run so someone would be overseeing the machines around the clock. The order was fulfilled in four days and delivered on time.

“That’s our life, that’s how we earn our living, keeping the customer happy,” said Champagne. “We’re small but we’re very fast and every customer is extremely important.”

Because his process is highly efficient and versatile, Champagne always keeps an open mind to future opportunities.

As the owner of 600 molds, Champagne is not averse to working with entrepreneurs on small orders or even helping out with product prototyping. That’s the kind of work larger shops won’t consider, forcing many would-be customers to go offshore to Asia where the quality is dubious and where there are inherent risks in safeguarding intellectual property.

“This is my next leap in molding, to offer companies in Northern Ontario as good a deal as you would get in China, but it would be better and you can trust us,” said Champagne.

“Size doesn’t matter. We like people with long arms, deep pockets and lots of cash.”