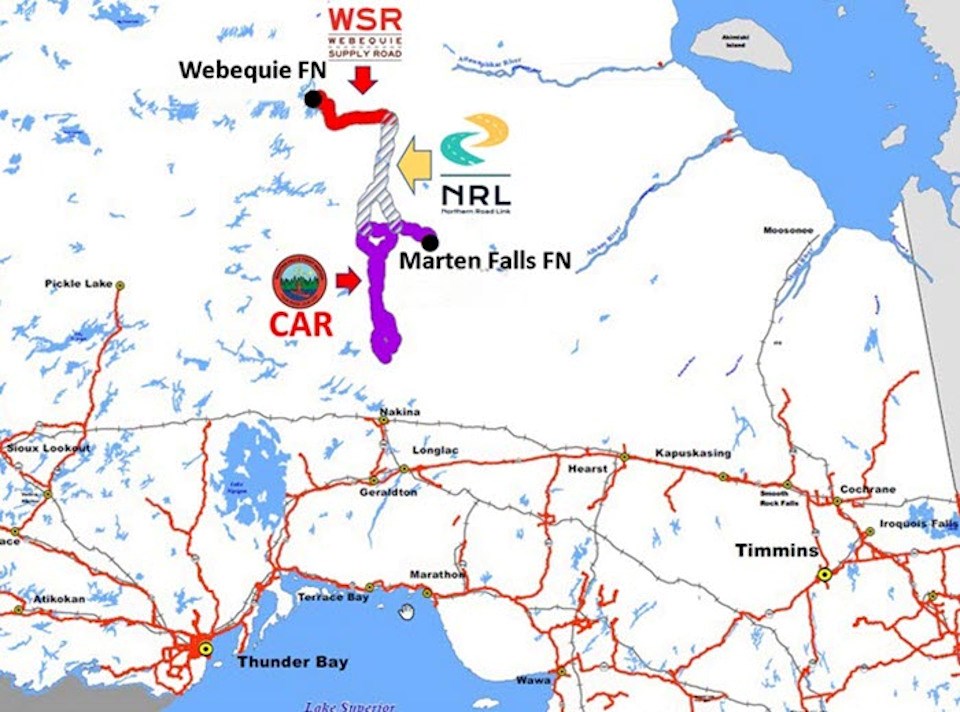 The Ring of Fire and its would-be road made the Ontario Real Estate Association's (OREA) Top 10 list of "game-changing" infrastructure projects in the province.

A Strategic Transportation Link to Ontario’s Ring of Fire ranked eighth behind a raft of transit and rail projects in the Greater Toronto Area, eastern and southwestern Ontario.

OREA called the Far North exploration camp, Canada's "largest known source of untapped mineral wealth," but it faces huge logistical challenge to reach the stranded nickel, chromite and base metal deposits due to the area's remoteness.

Locate some 500 kilometres northeast of Thunder Bay in the James Bay region, OREA said a permanent road is needed to send supplies into the proposed mining camp, haul ore out for processing, and provide year-round access for the delivery of fuel, medical supplies and health food to a handful of isolated First Nation communities that will connect them to the provincial highway network for the first time.

OREA said accessing this world-class mineral belt by road or rail "will define Ontario’s relationship with its Far North for a century. It presents opportunities to work alongside Indigenous communities to ensure environmental impacts are considered, land rights are respected and economic benefits are realized equitably.

"This ecologically sensitive land traverses the traditional territory of several Indigenous communities and should only be accessed in true partnership, consultation, and shared prosperity," the association said in its project description.

OREA worked in tandem with KPMG Global Infrastructure Advisory to spotlight a handful of big projects that will generate a substantial of employment and contribute mightily to Ontario's economy at large.

Ranked first is the proposed Pearson Transit Hub, which covers the area surrounding Toronto Pearson Airport, known as the Airport Employment Zone (AEZ). It's the second largest employment cluster in Ontario at 330,000 jobs, behind only downtown Toronto. The area is regarded as one of Canada's worse places for traffic congestion due to workers travelling to and from the area.

A proposed transit hub would integrate several existing and planned transit lines into a multimodal anchor, similar to size and scope to Union Station.

Completing this project could potentially increase the number of jobs in the AEZ to 700,000 by 2035.

The ninth-ranked project is province-wide broadband.

OREA said the technology gaps that exist between urban and rural Ontario have persisted for too long as many people in rural areas do not have reliable connectivity, making it impossible to work from home, attend a virtual class or start a small business.

OREA's Ten Infrastructure Projects for a More Competitive Ontario include:

7. A New Freeway and 21st Century Border Infrastructure for the Niagara Peninsula

8. A Strategic Transportation Link to Ontario’s Ring of Fire