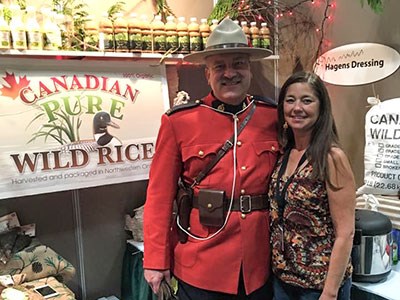 A lifetime spent foraging for wild rice has become a business for Kailey Divers of Canadian Pure Wild Rice.

For the owner of Canadian Pure Wild Rice, the 10 days spent at the annual show in Toronto last November was a launching pad that has gained her more exposure than she can handle, and could quite likely double her sales this year.

“I’m glad I did go. It was a real eye-opener,” said Divers, who bundled up 950 pounds of wild rice for the event and sold most of it.

Celebrity TV chef Ted Reader, one of her customers, even promoted her naturally grown product during a cooking demonstration.

“I’ve gotten so many emails from people wanting more,” said Divers, who hails from Wabigoon, a 20-minute drive east of Dryden.

Wild rice is proving to be a growing concern for Divers in running her business out of her lakeside home located between Wabigoon Lake and Dinorwic Lake, on a connecting channel known as “The Narrows.”

She contracts a neighbour to harvest the naturally growing aquatic grass which chokes the nearby lakes, rivers and bays.

“I’ve got wild rice growing beside my dock. It’s all over the place.”

Usually found in cold, moving water, anywhere from a foot to 12 feet deep, Divers hauled about 4,800 pounds of green rice last year, half of that being water weight.

“I’m always hoping I’m going to have a good crop, but I haven’t had to worry too much so far for the past 10 years.”

Wild rice is a more established industry in Manitoba, Saskatchewan and the northern U.S. Not so much in northwestern Ontario, even though the plant thrives throughout the region.

The nearby Wabigoon First Nation ran a commercial wild rice processor until a few years ago, shipping in bulk to international clients.

Now many folks in the area just harvest for their own personal use.

Divers’ passion for wild rice, and all things natural, was inspired by her mother, who frequently picked wild mushrooms, berries and various leaves.

“I’m a real forager. Hunting, fishing and camping, we learned to make use of what was available.”

She ran a Dryden flower shop for 20 years before selling it to devote more time to her sideline business, which she established in 2008. The local demand for her product took off right away.

Nutritious and high in fibre, Divers said the rice has a mild, nutty flavour.

“I use it for everything. I make bread out of it, desserts and even soups. I’ll cook up wild rice with water and a bit of chicken broth and throw it in the freezer and add it to stir fries. It’s endless.”

For about a two-week period in late August, a licensed neighbour with a pontoon air boat begins the harvest. His watercraft is specially outfitted with a screen on the bowl that knocks the seeds off the stalks into a collection basket.

Once on shore, the wet seeds are packed into 60- to 80-pound bags and trailered to a processor in southern Manitoba. The husks are removed and the seeds are dried and sorted into medium, large and extra-large grades.

Inside a temperature-controlled building at home, Divers packages the rice year-round into smaller pound and half-pound bags for customers.

With her business “definitely on the upswing,” Divers is mulling over whether she needs to expand.

Due to shipping costs, her market is largely confined to the Dryden area, distributing to eight stores. But as more out-of-town orders come in by email and through Facebook, it’s given her pause for thought.

“I’m getting more and more (orders) from southern Ontario” as she ships out deliveries of 100 and 200 pounds to retailers wanting carry her product. “I’ve had so many requests to send my wild rice overseas, weekly.”

Through Canada Post — the cheapest courier she’s found — it’s roughly $1 to $2 per pound, depending on the size of the order.

“I would do it (expand) if I could, but nobody wants to pay my prices, because I’m still a small operator.”

But hiring helpers for bagging may be in the cards if the demand grows stronger.

“One person can only do so much. So far it’s been manageable,” said Divers.

“I would love to have my own rice plant and rice boat. I can see myself doing that in the future.”