There’s a will, but is there a way? First Nations and northwestern Ontario municipal leaders are diving into the details this summer on how to tackle the exorbitant costs of delivering food and consumer goods to remote fly-in reserves.
Jun 30, 2015 1:46 PM By: Ian Ross 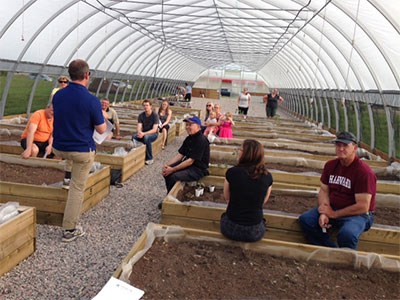 Cloverbelt Local Food Co-op could be a vehicle to provide fresh and affordable regionally-grown and farm-raised healthy food to remote First Nation communities.

There’s a will, but is there a way?

First Nations and northwestern Ontario municipal leaders are diving into the details this summer on how to tackle the exorbitant costs of delivering food and consumer goods to remote fly-in reserves.

A two-day gathering on the Lac Seul reserve this past spring took on historical proportions as regional mayors met with chiefs from 31 communities to discuss if a coordinated and collaborative approach through a regional food distribution network can work.

Sioux Lookout, Lac Seul and Kitchenuhmaykoosib Inninuwug (K.I.) are studying the feasibility of a non-for-profit logistics company with a distribution terminal at the Sioux Lookout airport.

High instances of diabetes and heart disease in the Far North communities are being blamed for unhealthy diets, the limited availability of fresh foods, and limited knowledge of western diets. The high cost of transport is a major problem.

“Most vegetables aren’t available here in town,” said Noah Chapman, a K.I. resident and the co-ordinator of the feasibility study. “There’s lettuce available but to make a Caesar salad, there’s nothing like that in town.”

“Here it’s three to four times higher than what it is down south,” said Chapman.

The cheaper and popular options are packaged macaroni, canned meat and pop.

Chapman is working with the communities and MNP, a Winnipeg consulting firm, on a feasibility study and business plan for the concept. A draft report is expected in July for the partners to review with a final document due out in August.

Sioux Lookout is the service hub for these communities and a popular place for fly-in grocery runs, said Chapman. “Everybody I know, when they go out for business meetings, they’re bringing something back.”

That’s not lost on Vicki Blanchard, Sioux Lookout economic development manager, who lists the distribution centre and the food crisis in the communities as high on her agenda.

“We’re on the right track, but this is long overdue.”

“The distribution centre is about managing freight, not planes. Every community can’t be doing it through different carriers at different times.”

A big question to be answered is what goods - like fish, mitts and moccasins – can the communities produce by way of backhaul freight to generate a reverse economy?

Jen Springett, president of Cloverbelt Local Food Co-op, returned from a trip to K.I. last November with an ornate and intricately carved set of moose antlers that they sold online for $650.

She encouraged the band council to find harvesters and crafters who are interested in selling goods through the co-op.

Now celebrating its two-year anniversary, the Dryden-based online farmer’s market has become a wildly successful social enterprise model that could be expanded in the North.

The not-for-profit has 600 members who shop online for wild-harvested and farm-produced vegetables and meats, natural bath and beauty products, and various crafts from more than 50 local producers.

The pre-ordered goods are dropped off at designated points in Dryden, Kenora, Upsala and Sioux Lookout.

“We’re looking to expand across the entire region,” said Springett, who attended the Lac Seul gathering.

“I was really grateful to be part of something like that. You could tell people are ready to see change and work together.”

When Springett presented the Cloverbelt model to chief and council last fall, she was shocked by the price mark-ups in the stores and the lack of available healthy food.

Shelves and freezers were packed with high-salt, high-fat canned and processed food. Small coolers contained a few heads of lettuce and a couple of peppers; too expensive and too foreign for residents to buy.

The cucumbers that her travelling companion, Connie Nelson of Lakehead University’s Food Security Research Network, packed for the trip were a mystery to residents.

“A great deal of the people she was serving them to, didn’t know what they were.”

Currently, Cloverbelt is conducting a regional food-mapping project to take stock of producers across the region. Though they would like to serve the remote communities, there are stumbling blocks.

“As of right now, we need more of everything. There’s a lot of opportunity for growth in the agricultural sector.”

Consumer demand for locally-produced milk and chicken is huge, but provincial restrictions on quota has hamstrung those sectors.

“It’s something we all hope the government at some point will recognize as an issue.”

Ring of Fire supply road ownership, financing unclear as environmental assessment begins
Oct 6, 2020 6:42 PM
Comments
We welcome your feedback and encourage you to share your thoughts. We ask that you be respectful of others and their points of view, refrain from personal attacks and stay on topic. To learn about our commenting policies and how we moderate, please read our Community Guidelines.