A popular food co-operative in northwestern Ontario has grown its online presence in bridging the gap between farmers and devotees of locally produced food.
0
Aug 2, 2016 2:57 PM By: Ian Ross 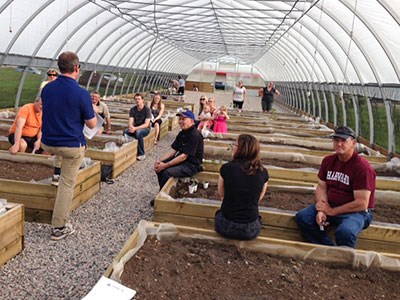 Dryden’s Cloverbelt Local Food Co-op is expanding its distribution network across the northwest.

A popular food co-operative in northwestern Ontario has grown its online presence in bridging the gap between farmers and devotees of locally produced food.

Dryden’s Cloverbelt Local Food Co-op launched a regional food map last winter, basically pinpointing and identifying who grows and produces what, and where.

The map is great exposure for farmers to generate more sales at the gate.

“What we’ve wanted to do is put these people on a map so the broader population can see in one place what sort of variety of produce is available in northwestern Ontario,” said Ledsham.

Ledsham spent months on the road attending farmers markets across the region, surveying vendors and gathering intel on what’s out there to post on the map.

There have been some pleasant surprises in finding some off-the-beaten path producers.

“It’s an ever-changing environment and from week to week you always find new people that you’ve never heard of,” he said.

One Dryden blueberry picker tipped him off to a little-known producer down the highway in Wabigoon who was harvesting 10,000 pounds of berries a year, “which was quite staggering to us.”

The map is actually a series of maps identifying producers, processors and distributors, and categorizing them by commodity.

Instead of just placing a dot on the map, Ledsham wanted to personalize each producer with a written profile and individual photo that puts a face to a name and creates a virtual connection to consumers.

From initially posting a small group of producers, Ledsham said their numbers have snowballed.

“The producers on it are happy. Some have actually taken to it quite well and almost treated it as an agricultural Facebook-type thing.”

He’s aiming to make it more interactive by changing the format so farmers can update their own profiles.

The concept of local food security and sustainability has taken hold in Dryden where the not-for-profit group boasts more than 1,000 members who shop online for wild-harvested food and farm-produced vegetables and meats, natural bath and beauty products, and various craft and sundries.

Producers deliver to Dryden where volunteers sort the pre-ordered goods into individual totes for drop-off at designated points both in town and in the outlying communities of Kenora, Upsala, Ignace, Sioux Lookout and, later this year, the Emo-Fort Frances area.

“The producers down there were extremely excited because they know Cloverbelt opens them up to the whole of northwestern Ontario, not just setting up in the local market, which only caters to that immediate area,” said Ledsham.

He attributes Cloverbelt’s popularity to the group sticking to its mandate.

“We’ve actually proven that we can move local produce as opposed to getting money for projects and research that doesn’t really give anything back to the producers.”

With four employees, Cloverbelt, which relies on government funds for projects and salaries, won a Premier’s Agri-Innovation Award in 2014.

The organizer’s role stands to get more prominent when a separate, but larger, regional food distribution network gets off the ground early next year.

Cloverbelt’s connections to the agricultural community and its existing supply chain should come in handy should the communities contact them to access regionally sourced food.

“Transporting from Dryden to Sioux Lookout is quite easy,” said Ledsham. “We’ve got the facilities and the connections for the producers to do that. If we can organize that in greater volumes and Sioux Lookout can get it to the Northern communities, it would be a win for everybody.”