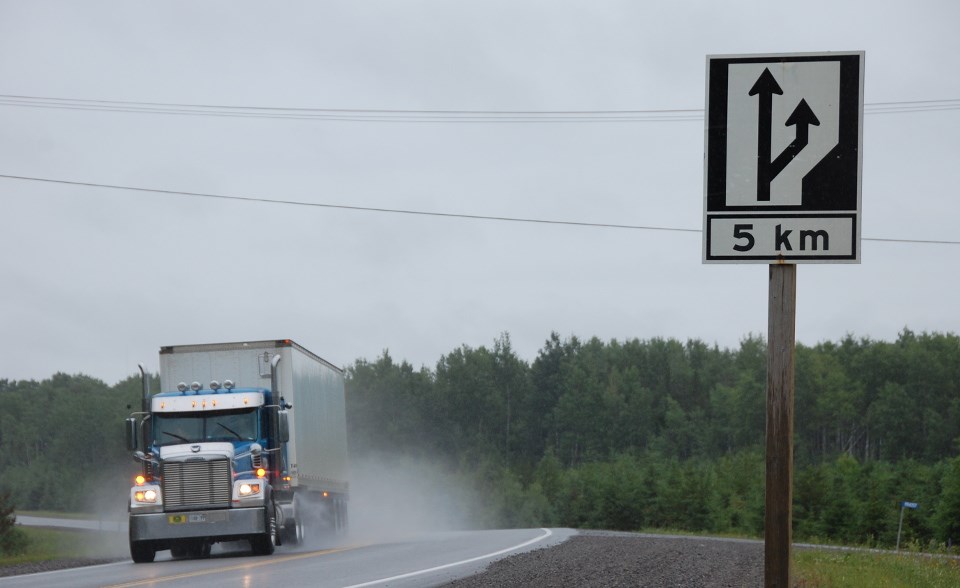 Despite a Temiskaming chamber of commerce push for a 2 +1 highway system, the Ministry of Transportation insists adding more passing lanes will make Highway 11 safer (File photo).

A Temiskaming highway safety group vows to keep the pressure on Queen’s Park to trial a proven Swedish-engineered roadway model with a 20-year track record at reducing fatal collisions.

While the Ministry of Transportation isn't entertaining the idea of test-driving the 2+1 model on Ontario highways anytime soon, Mark Wilson of the Going the Extra Mile (GEMS) Committee said a provincially commissioned engineering report makes some findings and recommendations that suggest otherwise.

“The report identifies significant advantages and that a pilot would be something to trial,” said Wilson, who provided excerpts of a report, prepared by WSP for the ministry, to Northern Ontario Business.

Wilson said the findings are in stark contrast to the “very negative” remarks MTO staff delivered, in dismissing the 2+1 concept, last April in a special briefing he attended with chamber of commerce representatives and local politicians.

The 2+1 highway configuration was first introduced in Sweden in the 1990s, as part of that country’s Vision Zero road safety strategy, an ethics-based approach to achieve no fatalities or serious injuries on its highway system.

The three-lane road configuration has continuous and alternating passing lanes with a safety barrier on the centre-line median, made of either cable or a steel barrier. Sweden averages 2.8 highway deaths per 100,000 people, among the world’s lowest rates for roadway mortality.

The concept has since been adopted by a number of European countries due to its positive results, but they are rare outside the continent.

In one excerpt released by Wilson, the consulting engineers felt the addition of a median barrier in a 2+1 highway “will result in a reduction in annual fatal collisions of approximately 41 per cent.”

The consultants further recommended that the pilot study be done on a short section of highway to confirm the benefits and gauge drivers’ reactions.

Wilson, a retired occupational health and safety professional, is the research lead for GEMS. The committee is an offshoot of the Temiskaming Shores and Area Chamber of Commerce, which has been championing 2+1 as a cheaper alternative to four-laning Highway 11 between North Bay and Nipigon.

Wilson is convinced 2+1 can save lives and intends to press the issue, based on his observations of these highways in Sweden and Ireland, his discussions with government officials in those countries, and the positive feedback from talking with road engineers here.

“It’s a matter of persistence. I’m quite encouraged by what the report says.”

With ministry staff not on board, Wilson said his group intends to appeal directly to the political decision-makers as they look to build Ontario-wide support among municipal groups.

Wilson said they’ve requested meetings – and are awaiting a response – with Etobicoke Centre MPP Kinga Surma, the associate minister of transportation, with an eye on getting an audience with Transportation Minister Caroline Mulroney.

In the recent months, GEMS has made presentations to regional and provincial municipal conferences and plans to seek resolutions for support for 2+1 from area municipalities now that the report is out.

The Federation of Northern Ontario Municipalities is in their corner and Wilson said they’ve recently fielded interest from a municipal association in the Ottawa Valley.

For years, the MTO has maintained there’s not enough traffic volume to warrant twinning Highway 11.

But community leaders along the corridor argue the highway has become the preferred route of long-haul truckers moving freight across Canada. More transports on the highway, they say, with too few passing lanes, is making the road more dangerous with head-on collisions and frequent road closures.

“They’ve (MTO) said four-laning is not an option, so we’re bringing in another option,” said Wilson

Provincial stats show traffic volumes on Highway 11 around Latchford, Dymond Township and Earlton is up more than 40 per cent since 1988.

The ministry insists their operational review shows the highway is performing as it should, but there’s room for improvement with additional passing lanes, centreline rumble strips and paved shoulders.

In April, the ministry told Northern Ontario Business that implementing the 2+1 model here was not feasible given their concerns that the median barrier could cause even more severe collisions.

There was also an internal reluctance in applying European road standards here. Adding a third passing lane would mean having to widen the road base, something the ministry isn’t prepared to do.

MTO spokeswoman Kristin Franks said there are no immediate plans to do a pilot-scale 2+1 project on Highway 11.

“Not at this time,” responded Franks by email. “The ministry will investigate and consider alternatives, including 2+1, to further enhance and safety and operations of provincial highways.”

Franks said during the 2019 road construction season, the MTO rebuilt two passing lanes on Highway 11, south of Cochrane. Edge-line rumble strips will be added in 2020. Two passing lanes between Cochrane and Driftwood were also resurfaced. Announcements on more improvements are still to come.

Wilson sharply disagrees with their methodology.

“That shouldn’t be applied considering we don’t apply the same standard on valuing human life in our health-care system.”