This caribou is now extinct 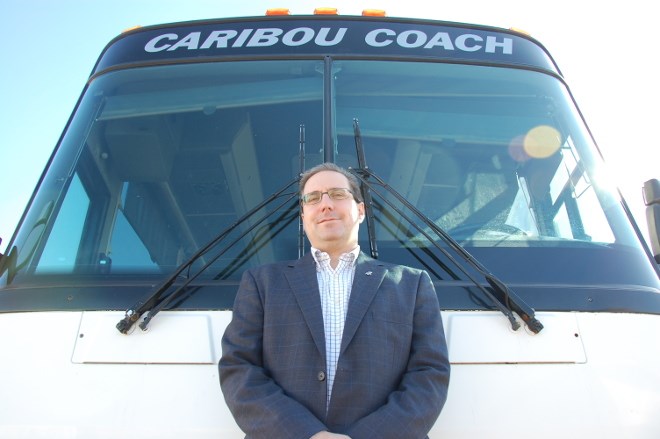 Collapsing the company he started 10 years ago after being forced to self-finance to stay viable brought no relief to owner Sandy Smith.

“It’s been difficult for me because I built it from scratch, from the ground up.”

Unable to get bank financing or tap into government funding programs, Smith said he grew tired of digging into his own pocket to try and keep service in northwestern Ontario going.

But a combination of dwindling ridership, rising operating costs, and onerous provincial fees, exacerbated by competition from unregulated operators, factored into his decision to close shop.

The 10-employee company had dropped service between Thunder Bay and Fort Frances last October to focus on charter business.

Some of his remaining six buses have been sold to a northeastern charter bus operator, Tisdale Bus Lines of South Porcupine. Tisdale is applying to the Ontario Highway Transportation Board to transfer over Caribou’s operating licences.

Together with his wife, Lori, Smith said they decided in mid-December to shut it down in January.

“In our line of work the biggest expense is the equipment, and none of the federal or provincial programs would allow you to apply for funding to be used for equipment because it’s considered rolling stock.”

In recent years, Smith said he’s had to compete against unlicensed operators who’ve steadily siphoned off his customer base on some of his marginal routes.

He called the Ontario Highway Transport Board “absolutely useless” in regulating these illegal carriers.

One, he claimed, ran for seven years on Highway 11 without a commercial licence.

It was only when Smith complained to the board that the operator was forced to suspend service until they were permitted to continue.

His decision comes about a month after the Ontario government announced its strategy and a grant program for expanded “hub-and-spoke” regional bus service, promising five-day-per-week return service for communities not serviced by bus.

The province is buying new coaches for the Ontario Northland Transportation Commission (ONTC) to expand into new territory in the northeast while negotiations are underway with a Thunder Bay bus company, Kasper Transportation, on a pan-Northern interline agreement to share passengers and freight.

Queen’s Park is not providing any subsidies to Kasper.

The province hopes to make similar arrangements with other private carriers.

In a phone interview, Smith huffed when asked if his decision to close had anything to do with the province’s Northern bus plans.

“If we had known anything about that earlier on we might have been able to look at things a bit more.”

After dropping the Fort Frances run last fall, Smith said he had been contacted by the Ministry of Transportation to inquire if he was still running scheduled service.

He claimed he was not made aware of the government’s broader plans. Kasper Transportation, however, continues to grow.

The company launched into Caribou’s old stomping grounds with mini-bus service to Fort Frances and up Highway 71 to Kenora. Come February, that service will extend into Winnipeg.

And Kasper is making more moves to head east.

As part of its arrangement with Ontario Northland, Kasper has licence applications before the highway board to run scheduled service from Thunder Bay to White River on Highway 17, and between Manitouwadge and Marathon on Highways 17 and 614.

Smith said he briefly ran 12-seat passenger vans to Fort Frances, but after hearing a litany of complaints about the small confines and the lack of onboard toilets from a handful of passengers, he switched back to large buses.

Ridership never improved until his five-day-a-week service was reduced to once a week.

“People want (to ride) new equipment and want better services. Stuff costs money but people don’t want to pay for it. That makes it tough.”

The province’s bus strategy has won the support of the Northwestern Ontario Municipal Association, but without subsidies, Smith is skeptical how private carriers can be expected to profitably make good on the government’s mandated five-day-a-week service to small towns.

“There needs to be something. It’s not the final solution. It will take two years to sort itself out before it’s revealed it won’t work. Or maybe I’ll be wrong.

“It’s the only adage if there’s money to be made there the people that used to be doing it would still be doing it. We got tired of losing our shirts doing it.”

Six years ago, Smith was mulling over expansion into the northeast to take over Ontario Northland’s routes before Queen’s Park killed its controversial plans to divest itself of the Crown agency. In 2013, he had acquired Excel Coach Lines of Kenora.

Smith is currently residing in Kingston pursuing an opportunity with a large southern Ontario coach company.

Because of highway gridlock and hefty airport parking fees, he finds the public’s demand for bus service there outstrips their ability to supply vehicles.

“It’s so substantially different from northwestern Ontario and the general mentality on how folks want to travel.”