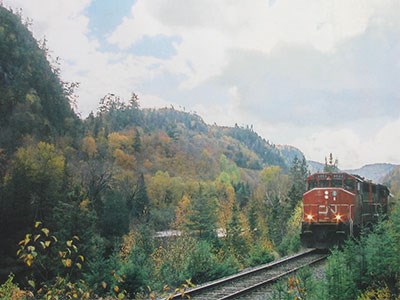 North America`s largest rail carrier quietly notified the mayors of Hearst and Sault Ste. Marie on Jan. 24 that service between the two communities would be halted by April 1.

The railway blames Ottawa for ruling that its Algoma Central branch line is ineligible for a passenger rail subsidy that covers the cost of operating expenses.

“There’s part of me that believes from their statement, this was their out,” said Sault MP Bryan Hayes of CN. “They’re in the business of freight, not passenger service.”

Transport Canada advised CN on Nov. 18 that the subsidy for the 476-kilometre line under the Remote Passenger Rail Program would run out as of March 31.

Hayes was aware of Transport Canada’s decision last November but didn’t know CN’s intention since the company hadn’t come to him to lobby for support.

“I couldn’t predict their response. This was in CN’s hands and they sat on it for almost three months. There’s part of me that said, things are fine, obviously CN is not making any announcements and I figured three months have passed and CN will continue the service.

“But for them to pull the plug with two months left, I don’t think that’s a wise decision and that makes things more difficult.”

Running three times a week, the service has been a chronic money-loser for the railways for years. Subsidies have propped it up since 1977 when the now-defunct Algoma Central Railway ran it.

CN spokesman Jim Feney said in an email that the company is a “freight railroad” and without a federal subsidy the service is unprofitable to run.

When asked why CN waited until January to notify selected stakeholders, he referred all questions to Transport Canada.

Hayes hopes that his government and CN can reach an interim agreement and funding for 2014 while stakeholders determine the next steps.

However, the feds still plan to provide $56 million over five years to keep passenger rail alive on the First Nation-owned Keewatin Railway Company in northern Manitoba and in the Labrador region of Quebec over the Transport Ferrovaire Tshiueten.

Transport Canada’s justification is that communities along the Algoma Central line like Hearst and Hawk Junction already have highway access. The program funding, the department said, is not intended for economic development or tourism purposes.

When CN purchased the former Algoma Central Railway from Wisconsin Central in 2001, it inherited the service and the popular Agawa Canyon tour. But tourism operators have complained about slow service, scheduling issues and the lack of promotion by the railway.

Hayes knows Ottawa’s and CN’s decision is sure to rankle Northerners still smarting over the Ontario government’s cancellation of the Northlander service between Cochrane and Toronto in 2012.

His office was being flooded with emails of protest from cottagers and camp operators along the line.

“I’m being led to believe that the service wasn`t being run all that efficiently in the first place,” said Hayes. “I’m not sure how engaged CN was in providing service.”

Ian McMillan, Tourism Sault Ste. Marie’s executive director, was attending a New Jersey fly-fishing show with a handful of area lodge owners and tourism officials when he received the news.

“It’s a devastating decision that’s going to have significant economic impact on the tourism industry,” said McMillan, who promotes the railway as a unique selling feature in showcasing the Sault as a “jumping off point” to world-class outdoor adventures.

“We think it’s a bad decision, but the timing of it and the lack of notice and any kind of public consultation makes it even worse.”

His organization is still smarting from CN’s decision last fall to cancel the Snow Train excursion, a huge winter marketing initiative that lures snowmobilers north to ride the trails in the Algoma district.

“It’s another piece of our transportation infrastructure that’s going to go by the wayside, like the Ontario Northland did, linking the communities and a dozen lodges.”

McMillan admits CN’s decision-making process has him concerned about the future of the canyon train, one of the city’s major tourism assets.

“You never know the inner workings of CN Rail and we’re not privy to their books, but any time that a railroad, used for freight, loses a passenger subsidy that’s an amount that is now out of the operating equation for that line.”

McMillan intends to galvanize area support, gather information and make an economic case to government to have CN’s decision rescinded.

For Linda Lebrun of Tatnall Camp on Oba Lake, north of Wawa, she’s feels her family’s 39-year-old business is now in limbo.

“It puts us in a real bind,” said Lebrun, who just returned from a Michigan outdoors show and was preparing for another in London. “Are we going to book another show with this news? We don’t know what to do.”

After spending thousands on magazine ads, refurbished cabins, a hot tub and Wi-Fi, Lebrun said their plans to buy new boats and motors are on hold.

With most of her visitors arriving by train year-round, Lebrun accuses CN of “poor planning.”

“We have tons of hunters (booked) for the fall, May and June look really good this year, and they take it right out from under us.”

Lebrun said CN’s disinterest in promoting the service is obvious.

“I ride the train and I look at the empty seats. It is a tourism train with so much potential.”

If the service stops this spring, Lebrun anticipates her business will also grind to a halt.

Al Errington, owner of Wilderness Island Lodge, said axing the service and revoking of the subsidy only deepens his mistrust of government.

Many of the guests he entertains at his lodge, located on the western edge of the Chapleau Game Preserve, arrive by rail. Most won’t use float planes and logging roads are not an option.

He levels blame at Ottawa and Queen’s Park for its fixation on investing billions on highways while neglecting other modes of transportation. He also laments the lack of a well-rounded national and provincial multi-modal strategy.

He’s further rankled that Prime Minister Stephen Harper wants to build a $300-million all-weather road to the Arctic Ocean “but doesn’t have $2 million to keep a remote rail service going.”

Linda Savory-Gordon, co-chair of the Coalition of Algoma Passenger Trains, knew as far back as 2010 that changes to the subsidy program were in the works, “but they had never been given any hint that it applied to the Algoma Central.”

Her advocacy group has a long-running campaign to take the service out of the hands of CN and into a proposed not-for-profit management board to handle all the marketing and scheduling. Some suggest it’s a prime route for the Ontario Northland to take over.

Savory-Gordon said the subsidy, in relation to its economic impact in the region, is not much in the context of the federal budget.

A 2007 study by Malone Givens Parsons prepared for her group pegged the average annual ridership at 10,600 passengers.

The actual spinoff benefits in the region are unknown other than it’s essential for the livelihood of lodges, outfitters and communities along the line.

From the feedback she’s been getting, she’s directing her members and others to petition their local MPs, cabinet ministers and Opposition critics.

“Usually when we have our email campaigns, we don’t get anywhere near the response that we’re getting from this one.”